Deepika Padukone and Ranveer Singh were at an awards function in Mumbai on Thursday where they were awarded the Beautiful Couple Of The Year. Deepika revealed a lot of secrets of her husband.
Share Via
Copy Link
Hindustan Times | By HT Correspondent

Deepika Padukone and Ranveer Singh are Bollywood’s latest power couple. The couple’s many pictures and public appearances together are a proof of it. The duo was awarded the Beautiful Couple Of The Year title at Nykaa.com Femina Beauty Awards 2019 on Wednesday and pictures and videos from the event are viral already.

Wearing a black dress with a dramatic blouse, Deepika looks spectacular as she received the award. Ranveer complimented her look sporting a dark pink, floral printed western formal suit. On the occasion, Deepika revealed many secrets of her husband.

Additionally, Deepika also won the ‘Woman of the Year’ award.

A picture says a thousand words -- this English idiom sits pretty on the duo. They shared pictures of themselves together in the same outfit on Instagram too.

This is the first time Deepika has shared a picture of the couple together, post their Mumbai reception and fans are tripping over it already. In fact, as soon as the actor shared the said picture, it went viral. Deepika is gazing at the camera, while Ranveer too looks at it too but at a tangent.

So spectacular was the effect that many Bollywood celebs were the first to react to it. Jacqueline Fernandez was the first to comment; she simply wrote “damn”. Not just her, Malaika Arora and Zareen Khan left a comment each, saying “Uff”.

Fans too were having a collective meltdown; one wrote how she “dropped her phone” on seeing it while another one said, “Baba and the queen”. 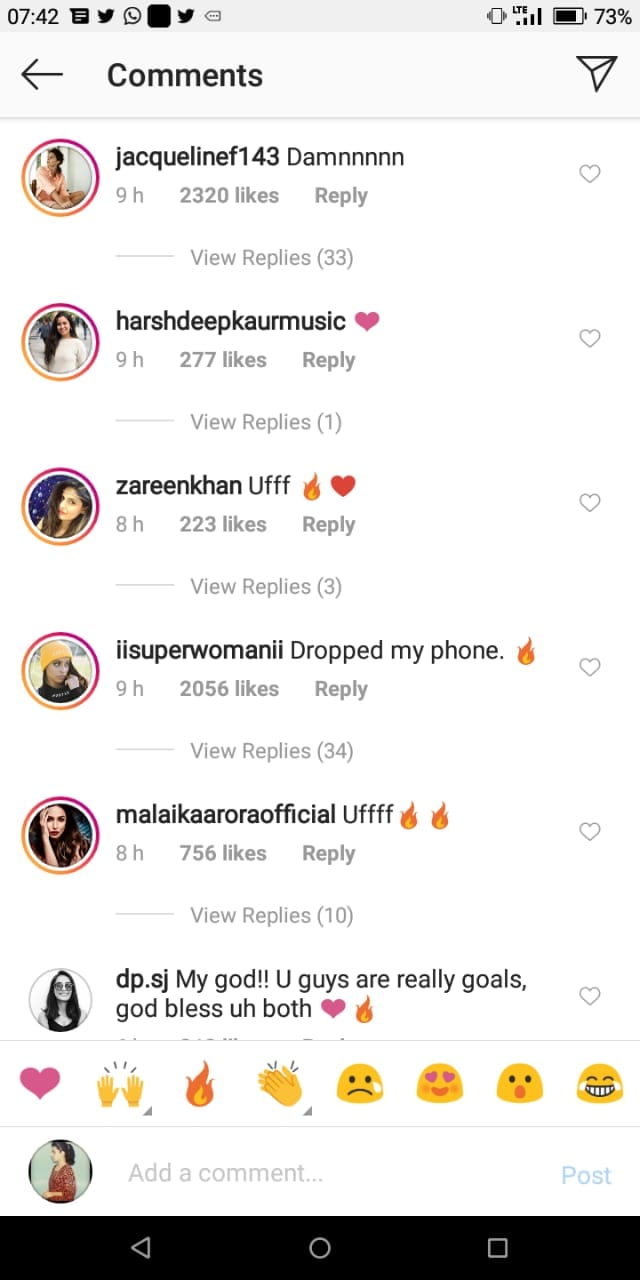 Check out the reactions the picture got online.

It is not for nothing that many consider Deepika and Ranveer the most fancied couple in Bollywood; the two look to be in perfect harmony. Both are successful professionals, both are independent individuals and both are confident about themselves and the other.

On their respective work fronts, both remain busy. Ranveer has been on a roll, giving two back-to-back successful films, Rohit Shetty’s Simmba and Zoya Akhtar’s Gully Boy. He has now moved on to his next work, Kabir Khan’s ‘83, which promises to be another interesting film.

Deepika, who had one release Padmaavat last year, will begin work on her first production, Chhapaak, which will be directed by Raazi director Meghna Gulzar. Deepika will essay the role of acid attack survivor, Laxmi Agarwal of Delhi, while Vikrant Massey will play the male lead.