How is India’s economy faring in April-May ’21 compared to last year?

GDP numbers for the quarter ending June 30 this year will only be released in August. Most economists do not expect this quarter’s GDP numbers to be as bad as last year’s numbers.
READ FULL STORY
By Roshan Kishore, New Delhi

For 68 days from March 25, 2020 onwards, India was in an almost complete lockdown. While restrictions were significantly eased in the second half of 2020, 2021 has seen a re-imposition of lockdowns. Data from Google Mobility Index shows that workplace mobility on May 20 this year was significantly lower than what it was on May 20, 2020.

1. Economic tailwinds from cheap crude oil are over

When the pandemic erupted in 2020, mobility and economic activity fell sharply across the world. This had a concomitant effect on petroleum consumption and, therefore, prices, which fell sharply. India’s average Crude Oil basket (COB) price fell to $44.82 per barrel in 2020-21, the lowest since 2004-05. More than 80% of India’s petroleum requirements are sourced via imports. So, cheaper oil brings multiple potential benefits for India. These include a higher GDP via favourable trade balance, lower inflation and higher government revenues if the benefits of lower crude oil prices are not passed on fully to the consumers. The windfall revenue gain from petroleum products played a significant role in supporting the fisc in 2020-21, a year when normal sources of revenue mobilisation collapsed. Oil prices have recovered in the last few months. Data from the US Energy Information System suggests that they are not expected to go down in the near future. This means a dissipation of the tailwinds which were there to support the economy in 2020. To put it otherwise, the government will have to either keep fuel prices at their current record highs or sacrifice a large part of its revenue. With GDP in 2021-22 likely to be lower than what it was expected to be, this is not an easy choice to make.

2. No more windfall gains from capital markets in 2021 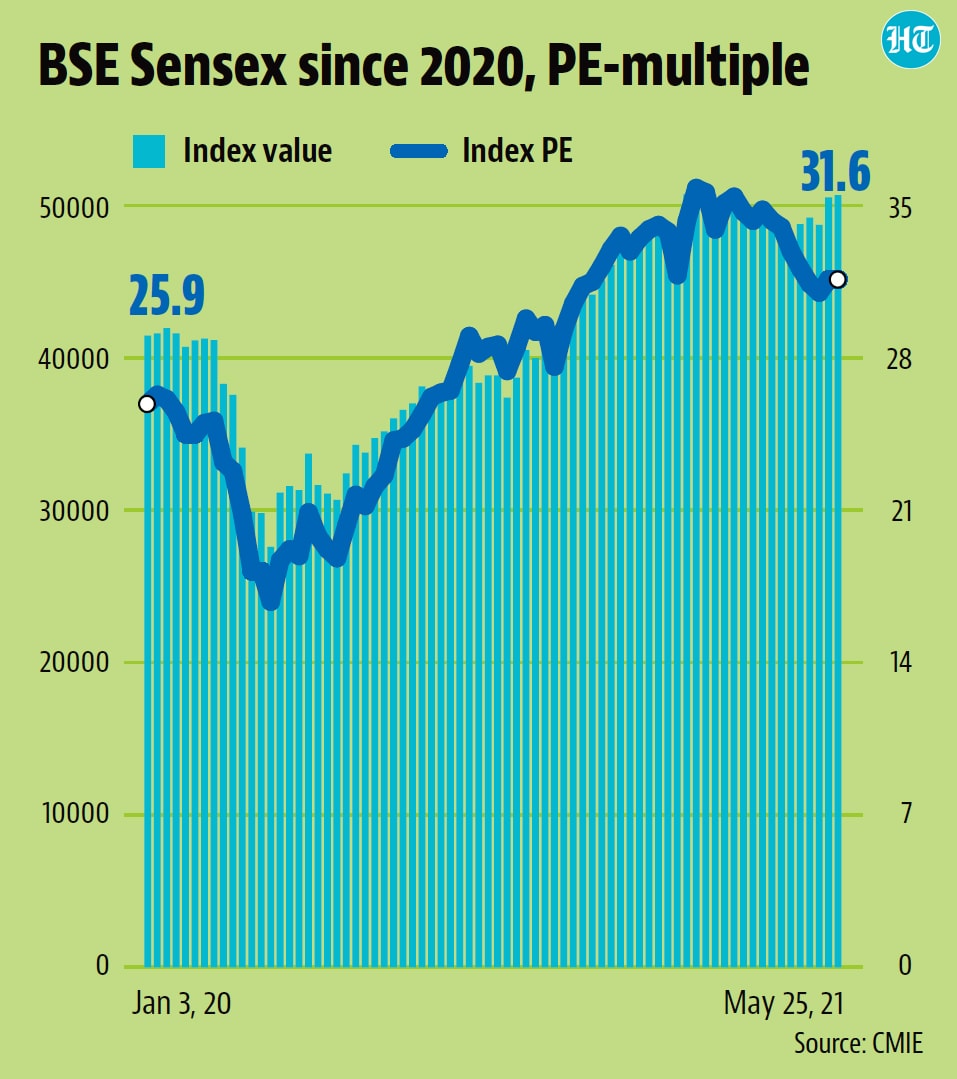 Unlike when the pandemic first erupted, stock markets have been remarkably resilient in India during the second wave. To be sure, the P-E multiple – which tells us the relationship between share prices and earnings per share – for the BSE Sensex has come down a bit compared its peak-2020 levels. The profit-led recovery has played an important role in this. However, BSE’s P-E multiple continues to be relatively higher than those of major stock markets globally. Then, there is the medium-term risk of stock markets correcting as and when interest rates go up in the advanced economies. All this means that there isn’t much chance of large-scale capital gains from the capital markets; in fact, there is the risk of a large negative wealth effect if there is a significant and prolonged correction.

3. Will India go from a high-risk to risk-averse strategy in opening up its economy?

One of the biggest reasons for the large-scale panic during the first wave of the Covid-19 was that there was very little knowledge about the disease. Nobody knew whether or when vaccines would be available. There was little clarity on how long the lockdowns would last and whether there would be more than one wave of the pandemic? There is now greater clarity on these. Vaccines are available but not in required quantities in India. Ensuring the latter could take some time. India’s exuberance – both the state and the private sector are guilty on this count, but the former has greater culpability – in believing that it will not face a second wave of the infections has been proven entirely misplaced. The Nomura India Business Resumption Index (NIBRI), a measure of business activity compared to a pre-pandemic base, fell to 60 in the week ending May 23, just three percentage points higher than what it was in the week ending May 24, 2020. It reached 99.3 at the end of February. This experience is likely to play a crucial role in shaping expectations about the probability of a third wave of infections and associated restrictions on economic activity. Sajjid Chinoy, chief India economist at JP Morgan, has underlined this fact in an essay published in the Business Standard, arguing that “the suddenness and sheer viciousness of the second wave could inflict behavioural scars for the coming months till a critical mass of vaccinations is reached”. These scars, Chinoy argues, could manifest themselves in policymakers becoming more conservative on restrictions, income uncertainty and precautionary savings increasing for households and private investment taking time to recover, notwithstanding the significant easing of monetary conditions.