BJP president Amit Shah and Congress chief Rahul Gandhi held rallies in poll-bound Chhattisgarh Saturday. Chhattisgarh goes to polls in two phases, on November 12 and 20. While the northern part of Chhattisgarh, mostly the Maoist-affected districts, will vote in the first phase, the rest of the state will go to polls in the second phase.Prime Minister Narendra Modi addressed a rally at Jagdalpur on Friday. At his campaign rally, Modi hit out at the Congress for being soft on urban Maoist, a term coined for left-wing intellectuals who sympathise with Maoists. He accused the Congress of describing Maoists as “revolutionary” and of ruining the lives of tribals.Highlights:

A high-decibel election campaign dominated by the Maoist issue with nearly half a dozen attacks by Left wing extremists during the period came to end Saturday evening in 18 Assembly seats spread across eight Maoist-affected districts of Chhattisgarh that will go to polls in the first phase on November 12, reports news agency PTI.

BJP president Amit Shah on Saturday called upon the voters to ensure the victory Chhattisgarh Chief Minister Raman Singh from Rajnandgaon seat with a lead of over 70,000 votes against his rival in the ensuing Assembly polls. Singh’s victory margin from Rajnandgaon was over 35,000 votes in the last polls.

Congress president Rahul Gandhi on Saturday hit out at Prime Minister Narendra Modi by accusing him of insulting Congress leaders like Mahendra Karma and Narendra Kumar Patel, who fell to the bullets of Maoists in Chhattisgarh. “Our leaders in Chhattisgarh have made the real sacrifice by standing up against the menace of Naxals,” said Gandhi, while addressing a poll rally at Maoist-affected Jagdalpur, reports news agency ANI.

Raman Singh has broken all development records in Chhattisgarh: Shah

Chhattisgarh Chief Minister Raman Singh has broken all records of development during his tenure, BJP president Amit Shah claimed Saturday, and sought to know what the Congress has done for the state.

Once counted among laggards, Chhattisgarh has now emerged as one of the most developed states in the country under the leadership of Singh, who became the chief minister in 2003, he said.

Congress president Rahul Gandhi promised all-loan waiver to poor farmers of Chhattisgarh within 10 days of forming the government if voted to power in the state, reports news agency ANI.

People’s affection and support is our strength: CM Raman Singh

“The people have faith in BJP’s administration. I’m glad at the large turnout during the roadshow in Rajnandgaon, their affection and support is our strength,” tweeted Chhattisgarh CM Raman Singh.

Campaigning for the first phase of state Assembly Elections in Chhattisgarh has concluded. Voting for 18 constituencies to be held on November 12, reports news agency ANI. 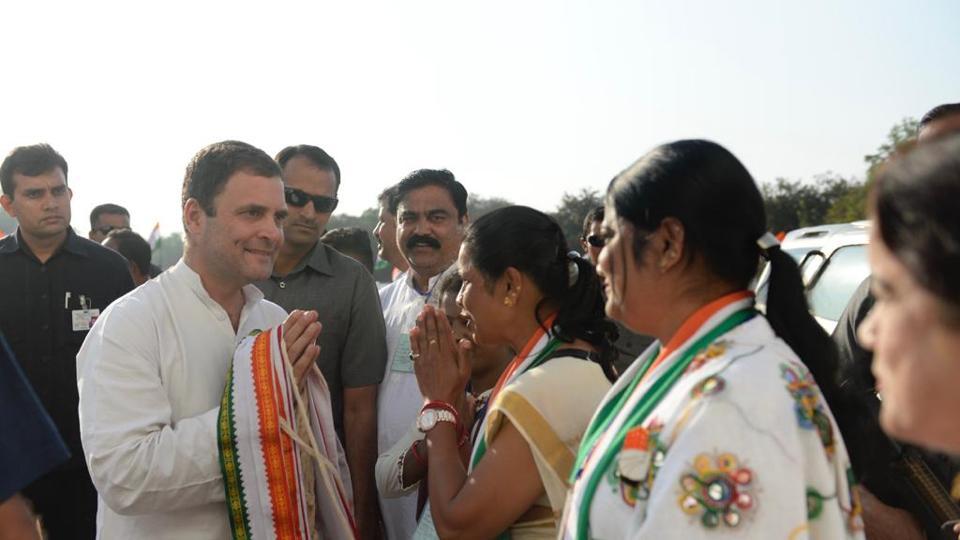 “The biggest obstacle in building the Ram Temple in Ayodhya is Congress. Congress doesn’t want Ram Temple to be built in Ayodhya. If Congress cannot support Lord Ram, it cannot be of any use to the people either,” said UP CM Yogi Aditynath while addressing a public meeting in Chhattisgarh’s Kawardha.

Will be your soldier in Delhi: Rahul

We have old relations with Bastar. You remember Indira Gandhi. I will be your soldier in Delhi. I will be with you whenever you need: Rahul Gandhi.

Our PM speaks of nationalism. During our time, the Air Force decided on Rafale. They wanted 126 jets. We decided to give the contract to HAL. Air Force told us they needed Rs 526 crore. But then PM Modi goes to France. The Rafale deal price increases to Rs 1,600 crore. When I asked him the question in Parliament, he was not able to look me in the eye: Rahul Gandhi in Kondagaon.

Would like to thank the people of Chhattisgarh for the Ram temple at Raipur: Yogi Adityanath

We will open hostels, provide scholarships for poor: Rahul

We will open hostels, provide scholarships for poor. We will work for all sections of people, not on the basis of caste or religion. PM does not speak of GST or note ban now.: Rahul

Want to see MP and Chhattisgarh become food hubs of India.China employs 25,000 youth every 24 hours. Modi govt can give jobs to only 450 in 24 hours. Banks’ Rs 12.5 lakh crore given to 15 richest industrialists . We want that money to be given to people. We want people to be self-employed. We brought land acquisition bill to protect land of farmers and tribals: Rahul

Every block will have food processing units if we win: Rahul

Will waive off farm loans in 10 days if we come to power. Will fulfil the promises made by BJP also. Lakhs of youths are unemployed. Farmers do not get proper price. Bastar does not have industries. Every block will have food processing units if we win. Farmers will sell directly to these units. These factories will employ your sons and daughters: Rahul

PM Modi gave Rs 3,50,000 crore to his industrialist friends. But farmers of Chhattisgarh get no help from him. He did not fulfil any promise he made in the last four-and-a-half years. We promised loan waver for farmers in Punjab. We did it: Rahul Gandhi

Will stop outsourcing of jobs: Rahul

40 lakh youth unemployed, tribal land given to industrialists, teachers’ posts vacant, no irrigation facilities in most lands despite 15 years of BJP rule. People of other states given employment here. We will stop it. People of Chhattisgarh will get jobs. Will give land to landless: Rahul Gandhi

Why no action against CM’s son when his name appeared in Panama papers: Rahul

Modi ji says he’s fighting corruption. But when he comes to Chhattisgarh, he doesn’t tell you the CM is corrupt. Your Rs 5,000 cr disappeared in chit fund scam, 310 FIRs were registered but no action was taken because CM was involved: Rahul Gandhi in Kanker, reports ANI.

Congress had promoted Maoism in this region for their own selfish motives. BJP govt is taking strict measures to combat it which has become a threat to people in this region. Congress toyed with national security for their political benefits: Yogi Adityanath, reports ANI.

PM ensuring house for all: Yogi

For the first time after independence, a PM announced that by 2022 no poor in India will be without a house. Had there not been a BJP govt at the Centre, people in Chhattisgarh wouldn’t have received the houses which they’re receiving now: UP CM Yogi Adityanath in Lormi,reports ANI.

Those who think Maoism is revolution can never work for Chhattisgarh: Shah

Farmers should get proper prices for their produce. It never happened earlier, but was possible only after BJP came to power. From a little over Rs 48,000 crore during UPA rule, Chhattisgarh got more than Rs 1,37,000 crore during PM Modi’s rule: Amit Shah

3,48,000 scheduled caste people will be given 7lakh acre land. Be it rural electrification or higher education, Chhattisgarh has excelled. After becoming PM, Narendra Modi focussed on Chhattisgarh. Small state like Chhatiisgarh got Rs 3,000 crore aid from Centre: Amit Shah

Today there are cement industries in Chhattisgarh. The state has moved forward in education and industry. Our focus was on Antodyay. We tried to benefit farmers. Chhattisgarh made law on skill development for the poorer sections. We ensured all govt schemes reach people without any corrupt practices: Amit Shah

Chhattisgarh is an example of how to go about development in democracy. The BJP under CM Raman Singh has moved positively. Chhattisgarh was known as under-developed. In 15 years, it has moved towards development. Biggest achievement was fight against Maoism, the way he has dealt with it: Amit Modi

Tomorrow, Yogi Adityanath will address one public meeting at Baikunthpur Dham and three in Durg district.

UP chief minister Yogi Adityanath will address eight public meetings today and tomorrow. Today’s meetings are scheduled at Lormi and Mungeli in Mungeli district, Saja in Bemetara district and Kawardha in Kabirdham district.

Preparations in Bijapur ahead of first phase of polls