DDA officials said it will be a one-of-its-kind park with an eco-forest zone, several lakes, cultural and adventure sports facilities and a ‘Mini India’ park that will have replicas of important monuments from different states.
READ FULL STORY
By Risha Chitlangia, New Delhi

Spread over 220 acres of verdant greenery in Dwarka sub-city, Bharat Vandana park is being developed as a major tourist destination by the Delhi Development Authority (DDA). The project -- the park will be developed in the shape of lotus —recently got clearance from the environment ministry’s expert appraisal committee (EAC).

DDA officials said it will be a one-of-its-kind park with an eco-forest zone, several lakes, cultural and adventure sports facilities and a ‘Mini India’ park that will have replicas of important monuments from different states. The park is being developed by NBCC India, which was roped in by the DDA in 2019.

“The project has got the environment clearance,” said a DDA official on Wednesday. 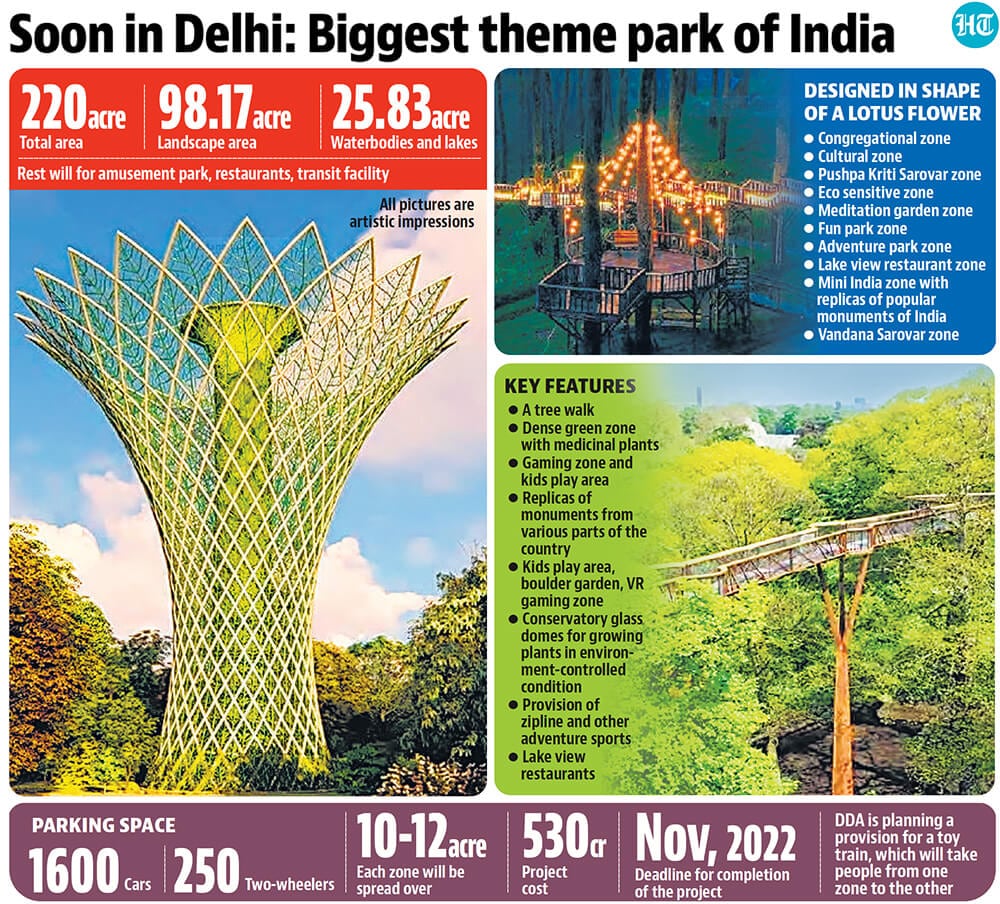 The park will be designed in the shape of a lotus flower with each petal acting as a zone for a dedicated activity. As per the plan, the park will have 10 zones: congregational zone, cultural zone, pushpa kriti sarovar zone, eco-sensitive zone, meditation garden zone, fun park zone, adventure park zone, lake view restaurant zone, mini India zone and the vandana sarovar zone.

DDA officials said each zone will be spread over 10 to 12 acres. For instance, the fun park will have gaming and other facilities for children while the eco-sensitive zone will be developed as a dense green zone with a large number of medicinal plants. The plan, DDA officials said, is to eventually hold tree walks for nature enthusiasts. There will be a dedicated area for food plazas and restaurants, including one overlooking the many water bodies and lake.

The project was conceived in 2019 and its foundation stone was laid by Union home minister Amit Shah in December 2019. The ₹530 crore project is aimed at developing the park as one of the main tourist attractions in the national capital. DDA officials said work has started at the site and the project is expected to be ready by November 2022.

The mini India park will be the other key attraction as it will have miniature replicas of popular monuments in the country. The park has been conceptualised to outline the heritage of India, said a DDA official.

When the plan was proposed, environmentalists and some local residents had opposed it, as they wanted the area to be developed as a biodiversity park. Diwan Singh, an environmental activist and a resident of Dwarka, said, “This area should be developed as a natural green space. It will help mitigate the increase in pollution in the area. There is a provision to make a parking space for 1,700 vehicles. Given the increase in pollution levels, there is a need to protect such green spaces.”

As per the EAC minutes, close to 99 acres of the area will be developed as a landscape area and over 26 acres will have water bodies and lakes. There will be 30 rainwater harvesting recharge pits spread across the park.