Noida aviation hub to get bigger

The civil aviation hub at Jewar, which includes the upcoming Noida International Airport on 5,000 hectares along Yamuna Expressway, is set to get bigger as the Yeida has decided to add another 1,000 hectares to the project by merging three proposed industrial sectors with the airport plan
Share Via
Copy Link
By Vinod Rajput, Hindustan Times, Greater Noida

The civil aviation hub at Jewar, which includes the upcoming Noida International Airport on 5,000 hectares along Yamuna Expressway, is set to get bigger as the Yamuna expressway industrial development authority (Yeida) has decided to add another 1,000 hectares to the project by merging three proposed industrial sectors with the airport plan.

The airport is billed to be the largest in India, and will be the National Capital Region’s third, after the Indira Gandhi International Airport (IGIA) and the civilian terminal at Ghaziabad’s Hindon airport. In December 2020, the Uttar Pradesh government approved the design of the airport at Jewar.

“Earlier, we planned the aviation hub on 5,000 hectares. But now, due to demand for more industrial land and other requirements, we have decided to merge three industrial cities planned in sectors 8, 30 and 31 with this project. These three sectors were planned on around 1,000 hectares. Therefore, now the aviation hub, which includes the Noida international airport, will be developed on 6,000 hectares. We are revising the master plan of the civil aviation hub accordingly,” said Arun Vir Singh, chief executive officer of Yeida and NIAL, the nodal agency of the UP government to monitor the airport project.

The three sectors were among four proposed industrial cities to be built along the periphery of the Noida international airport. Officials said the fourth city, Sector 7, will now be built as a separate project.

“It was merged with the aviation hub as we realised MRO (maintenance, repair and overhaul) of aircrafts has a huge potential to create millions of jobs in this region for skilled workforce,” said Singh.

MRO units ensure service worthiness of an aircraft with facilities for inspection and maintenance. The upcoming MRO facility at Jewar will be the first of its kind in Uttar Pradesh, officials said. 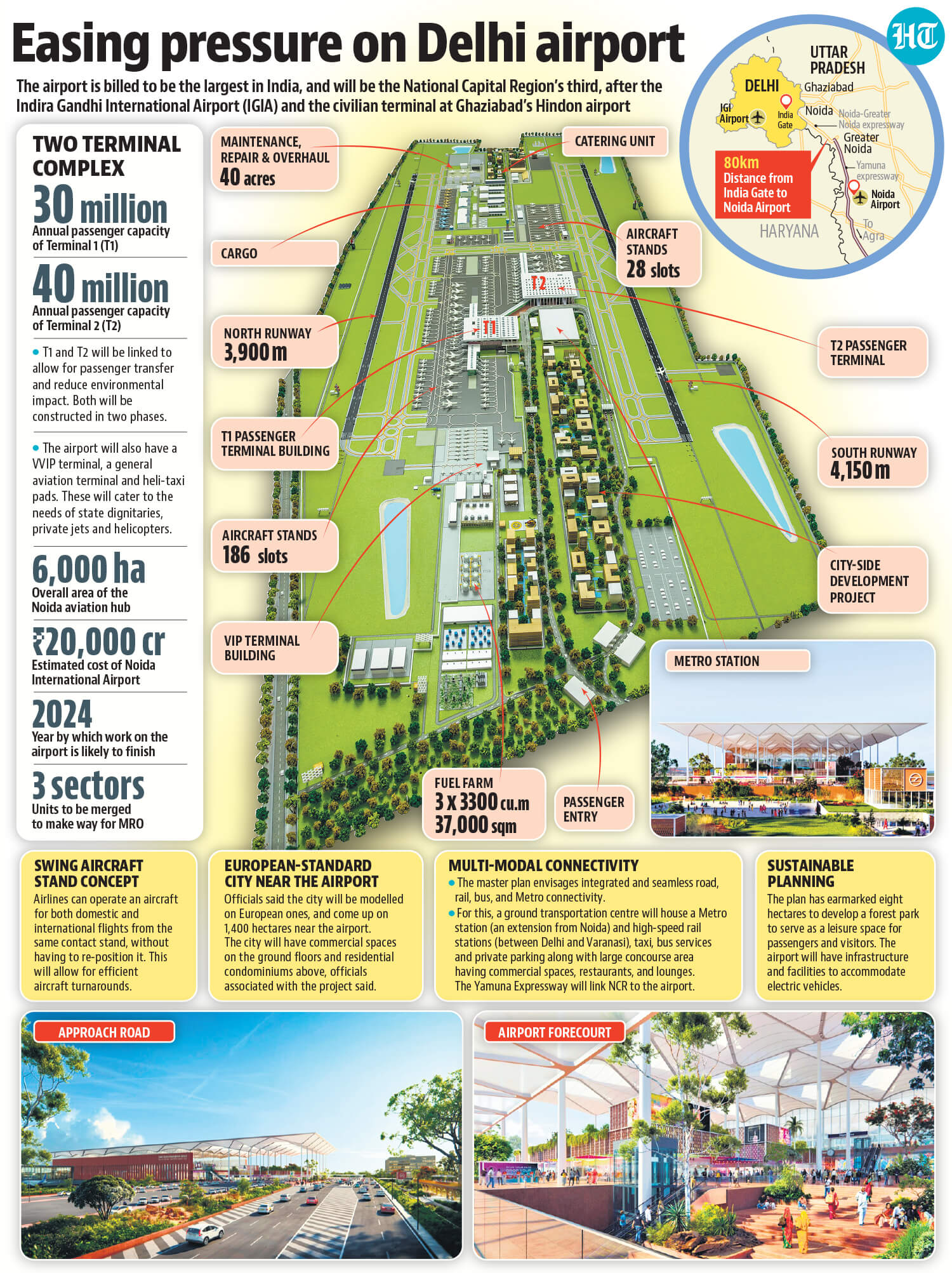 Yeida and NIAL have already handed over 1,334 hectares of the total 6,000 hectares to Yamuna International airport private Limited -- a special purpose vehicle set up to undertake the airport project -- which has begun constructing boundary walls and levelling the land. The airport project is expected to be completed by 2024 and will entail an investment of around ₹20,000 crore.

Further, the authorities also plan to develop a smart city -- modelled on European cities -- on 1,400 hectares of land near the airport.

“In the European model, we have commercial spaces on the ground and residential condominiums above it. The smart city near the airport will be a one of its kind urban development with all world-class facilities, zero waste discharge into soil, and best commuting options,” said Singh.

Singh said the airport project will boost the local economy, creating jobs for residents and business opportunities for investors.

“The local economy will witness a seven-fold jump as huge investment is being made by foreign and domestic investors after the airport project picked up pace at Jewar. We have received around ₹15,000 crore in the last three years. This region (along Yamuna Expressway) will generate around 500,000 jobs in the next three years,” said Singh.

He further said that several new projects, including warehouses, entertainment zones, amusement parks, apparel parks, logistics hub and film city, will come up once the airport becomes operational in 2024.

“The airport will create rental incomes for farmers and other stakeholders because MNCs and industrialists are on way to set up their businesses. The airport at Jewar will fuel growth just like the IGI airport did for south Delhi and Gurugram,” said Singh.

Hurdles along the way

Land acquisition for the project was a challenge initially as farmers refused to part with their land and demanded compensation four times the existing circle rate. Officials said that with negotiations running into a stalemate, Jewar MLA Dhirendra Singh held multiple meetings with farmers to push for acquisition.

The MLA said, “We are also requesting the government to set up a skill university for creation of jobs for the local youngsters.”

In his comments last month when the state government finalised the airport’s design, Christoph Schnellmann, CEO of the Yamuna International Airport Pvt Limited, said, “We are committed to developing the aviation ecosystem in India, with an investment of ₹5,700cr for phase I of the airport development. The Noida International Airport will hold strategic importance and will be an economic engine for growth in Uttar Pradesh and India.”

In November 2019, Zurich Airport International AG (ZAIA) won the contract to build and operate the airport in Greater Noida for a period of 40 years, which includes the phase one construction period of four years.

Last year, a consortium of Nordic Office of Architecture, Grimshaw, Haptic and consultants STUP were selected to design the airport. The new passenger terminal is aimed to be ‘India’s greenest airport’ reaching the goal of carbon-net-zero targets as well as efficient and enhanced passenger flows and digital services.

Officials have said that Jewar, situated along the Yamuna Expressway, will be connected to the Eastern Peripheral Expressway, the Delhi-Mumbai Expressway and also have a Metro link to Greater Noida besides the ambitious high-speed Delhi-Varanasi bullet train with a station at the Noida airport.