Kerala assembly polls: Covid fight in focus as Left, UDF battle it out

The elections are crucial for the LDF, with Kerala being the solitary communist bastion after the fall of the Left government in Tripura. For the Congress, a victory in the state would offer a balm after a bunch of electoral (and post-electoral) reverses.

Kerala, a state that doesn’t usually pick the same government twice in a row will vote on April 6. The election will see a fierce contest between the Congress-led United Democratic Front and the CPI-M led Left Democratic Front, the incumbent.

The elections are crucial for the LDF, with Kerala being the solitary communist bastion after the fall of the Left government in Tripura. For the Congress, a victory in the state would offer a balm after a bunch of electoral (and post-electoral) reverses. While the Pinarayi Vijayan-led LDF government is hoping to buck the trend and retain power on the basis of its tenure — it has cited citing the creation of new public sector units and infrastructure development as achievements — both the Congress and the Bharatiya Janata Party have attacked the government for its response to the Covid-19 pandemic, claiming that the state is now among the worst performing in the country. On Friday, the state registered 3,671 new Covid-19 cases, 22% of the total cases seen in India.

The government has also come under fire for the alleged involvement of its officials in the gold smuggling case and an agreement signed with a US tech firm to collate personal data of quarantined people. The issue of unemployment will also be raised, with many returning to the state from West Asia after losing their jobs due to Covid. 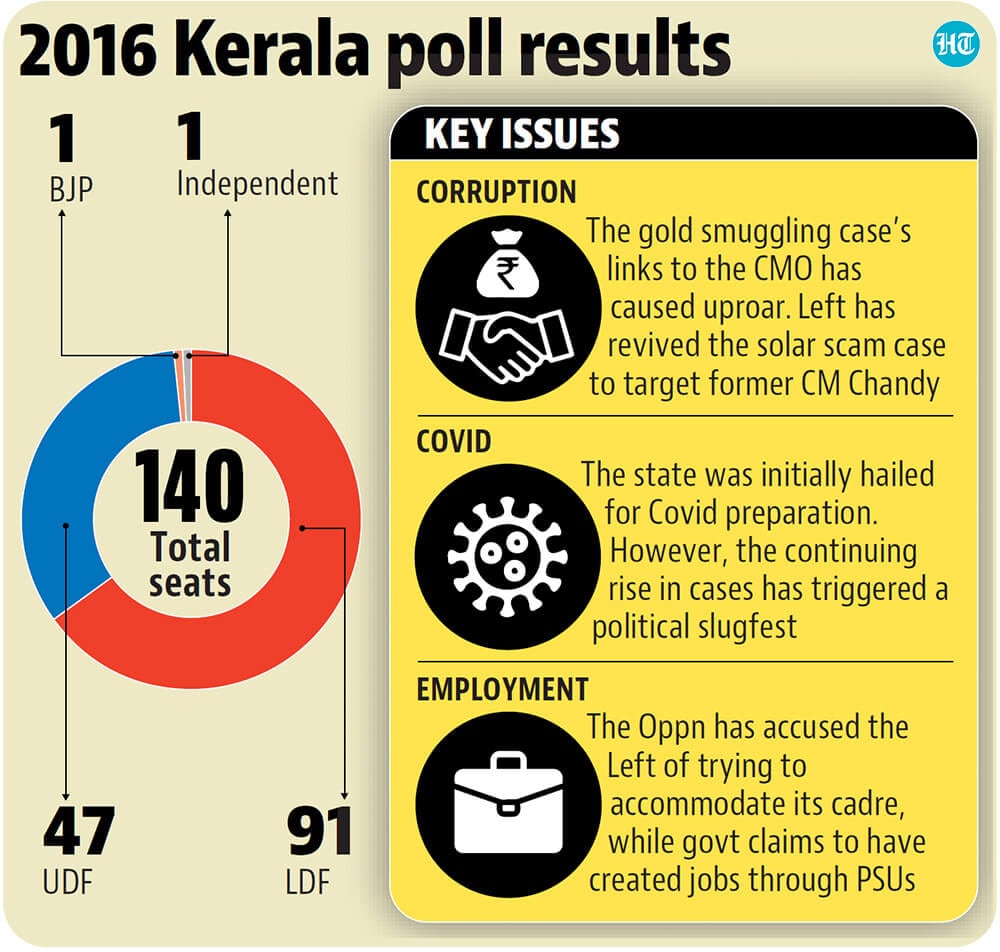 CPI-M MP KK Ragesh said: “The sero survey in many states shows that as much as 60% of the population was infected, but many have under reported the numbers...” The Congress is hoping to repeat its performance in the 2019 Lok Sabha elections, where it won 19 of the 20 seats.

The BJP, thus far a marginal player in the state, isn’t expected to see a breakthrough, said analysts, although the party insists it is a key contender in the “triangular fight”. State unit chief K Surendran hit out at the state for withdrawing cases against both Sabarimala and anti-CAA protesters. “The question is how can those who fought for Lord Ayyappa be equated with those who were part of the anti-CAA agitation and were propped by anti-India forces.”