Zinedine Zidane dropped a bombshell on Thursday, quitting the Spanish giants Real Madrid just days after winning the UEFA Champions League for a record third year in a row.

Just days ago Zinedine Zidane was basking in the glory of becoming the first coach in history to win three consecutive Champions League titles with Real Madrid and staking a claim as one of the great coaches in history.

On Thursday, he said he was quitting the Spanish giants in an announcement that seemed to have even taken the club’s president Florentino Perez by surprise.

It appears the 45-year-old Frenchman has decided that it won’t ever get better than this for him at the famously demanding 13-time European champions.

“I don’t see myself continuing to win this year and I am a winner, I don’t like to lose,” said Zidane, who was under contract with Real until 2020.

WHY ZIDANE MIGHT HAVE STEPPED DOWN
Zidane has not given any reason for his decision to step down as Real manager days after winning the Champions League. However, by the way things have gone this season, his desire to take rest may not be the only factor 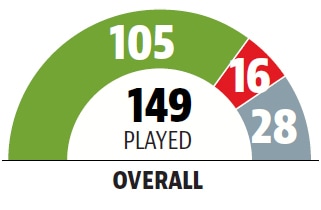 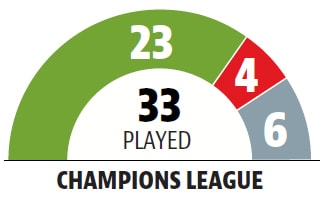 Ronaldo unhappy? Zidane has rested Ronaldo in the La Liga on several occasions this season to assure the Portuguese star’s fitness in big games. Ronaldo played only 27 of the 38 games in La Liga. After winning the Champions League, Ronaldo hinted at his uncertainty to remain at the club.Bale uprising Gareth Bale was left on the bench often despite his return to fitness. Zidane preferring to start compatriot Karim Benzema in the Champions League final despite Bale’s form — he scored in all four starts in La Liga leading to the final — could be the last straw.
Domestic failure Zidane’s lack of focus on La Liga may have been cause of heartburn for board and fans. He won one La Liga and a Spanish Super Cup in his twoand-a-half years. Real lost six and drew 10 in La Liga this season finishing third.In the family Zidane handed his second-oldest son Luca his senior Real Madrid debut ahead of second-choice ’keeper Kiko Casilla. Last season, Luca’s older brother Enzo was seemingly given more chances in the reserve team, before he was sold to Alaves. Zidane’s position as manager and Luca’s desire to rise in Real’s ranks could clash.

The Frenchman specialises in dramatic departures -- in the 2006 World Cup final in Berlin, his final appearance as a player, was cut short when he was sent off for headbutting the Italian defender Marco Materazzi. Zidane said he had insulted his family.

The 3-1 victory over Liverpool in Kiev on Saturday was the pinnacle of a coaching career after his reign as a player with Real Madrid which peaked when he scored the winning goal in the 2002 Champions League final against Bayer Leverkusen in Glasgow.

Zidane was considered one of the all-time greats as a player, his mixture of sublime skill wrapped up in a muscular package driving France to victory in the 1998 World Cup on home soil.

Affectionately known as “Zizou” in France, he was World Player of the Year three times, in 1998, 2000 and 2003 in a career that started at Cannes, moved onto Bordeaux before he moved into the big league with Juventus, staying five years, before joining Real in 2001.

Incredibly, his record-breaking achievement in Kiev came less than three full seasons in charge after he was promoted from his position as coach of Real’s youth team.

It was only in January 2016 that he took charge of the full Real team.

“You can’t help but admire what he has done,” France manager Didier Deschamps, who won the World Cup as a player alongside Zidane in 1998, told France’s TF1 after the Kiev triumph.

WHO COULD REPLACE ZIDANE
British bookmakers have already started taking bets on who will replace Zidane with Arsene Wenger among the front-runners. Here’s a look at the prominent names.
ARSENE WENGER The former Arsenal manager has the experience to manage the likes of Cristiano Ronaldo and Gareth Bale. But his conservative approach is not likely to find favour with the flamboyant Real bosses.
MAURICIO POCHETTINO 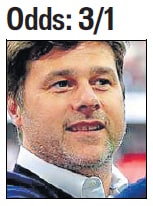 The way he has handled Spurs has impressed many, including the Real bosses. Bale would obviously like the move but the Spurs may not be enthralled by Pochettino entertaining such thoughts.
JOSE MARIA GUTIERREZ (GUTI) The current coach of Real Madrid youth team could follow Zidane, who had taken the same route to the senior team. However, he does not have the stature of Zidane to manage stars like Ronaldo and Bale.
JUERGEN KLOPP 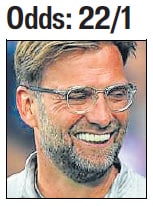 The German made a mighty impression on the Real Madrid boardroom by the manner in which he managed Liverpool. He has an existing contract with the Reds, who may not want to release him.
MASSIMILIANO ALLEGRI 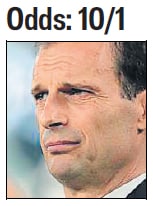 The current Juventus coach was also courted by Arsenal before they settled on Unai Emery. The chance to play in Europe and achieve continental glory that has eluded him at Juventus, could entice him.
ANTONIO CONTE His position is unsettled at Chelsea. He has had run-ins with his bosses, his players and also with the British media and wants to leave England. It could be a win-win situation for all – Conte, Chelsea and Real Madrid.

Madrid sports daily AS said after the final that Zidane was “the architect of this glorious and possibly unrepeatable era”.

It is widely expected that Zidane will one day manage France himself. He has never made a secret of his ambition to do so and speculation will now grow that he will succeed Deschamps after this year’s World Cup finals.

It is a remarkable record, all the more so for a man who before the Kiev final admitted to not being the best tactician.

“I am not the best coach tactically, but I have other things,” he said ahead of the final.

“I know very well how the dressing room and a player’s head works, and that for me is very important.”