Home / Health / Pakistan riskiest place to be born, India safer but not by much, shows Unicef report

Pakistan riskiest place to be born, India safer but not by much, shows Unicef report

According to a Unicef report, India’s neonatal mortality rate (deaths per 1,000 live births) is 25.4, which ranks it at 12 among 52 ‘lower middle-income countries’. The safest nation for birth on the list is Japan.

Pakistan is the riskiest country to be born in, with one in 22 babies born there dying before they turn one month old, according to a Unicef report released on Tuesday.

India’s neonatal mortality rate (deaths per 1,000 live births) is 25.4, which ranks it at 12 among 52 “lower middle-income countries” in terms of risk for newborns. While this is better than Pakistan, it is far behind India’s less prosperous neighbours.

In the same ‘lower middle-income’ countries group as India and Pakistan, Sri Lanka has the lowest neonatal mortality rate of 5.2, which is comparable with high-income countries.

Bangladesh, Nepal and Bhutan are also ahead of India in neonatal survival. 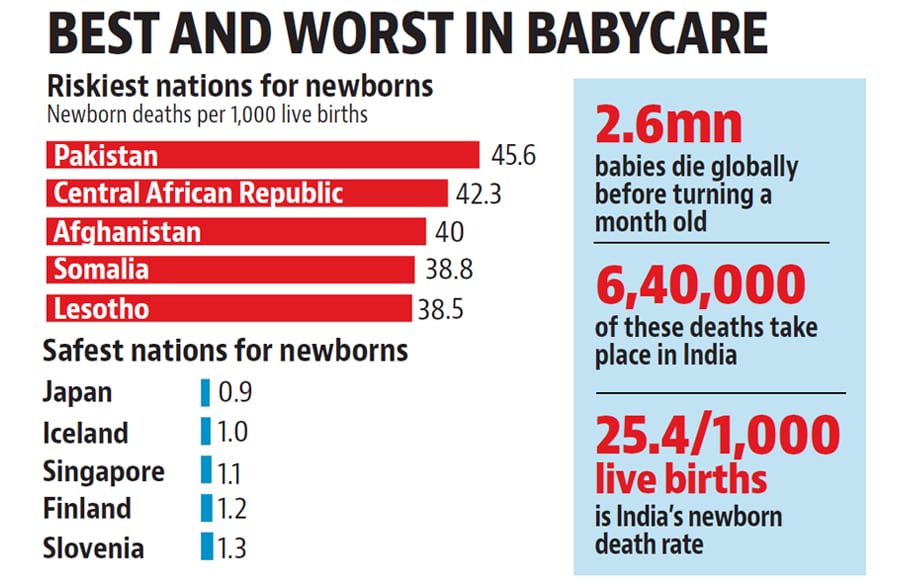 The safest nation for birth on the list is Japan, where less than one in 1,000 babies die by the time they complete a month.

Worldwide, 2.6 million babies die within a month of birth every year — an average of 7,000 deaths every day. Of these, India — where 26 million babies are born in a year — accounts for 640,000 annual neonatal deaths.

“India’s done better than the world in reducing under-five mortality, reducing it by 66% between 1990 and 2015 against the world average of 55%, but progress has been slower in saving babies during the neonatal period when they are the most vulnerable,” said Dr Yasmin Ali Haque, UNICEF representative in India.

“We (India) are currently off-track to meet our commitment to lower neonatal mortality to 12/1,000 live births by 2030 — we have to halve it in the next 12 years. But again, the focus gets narrower and sharper as we approach deadline, so we have to stay the course,” she said.

In 2016, India’s under-five mortality fell to 39 from 43 the previous year, resulting in close to 120,000 fewer children dying, in part because of vaccines against diarrhoea and pneumonia being included in the national immunisation programme.

More than 80% of newborn deaths are because of premature birth, complications during labour and delivery, and infections such as sepsis, meningitis and pneumonia.

Disparities between states are massive. While Kerala and Goa have neonatal mortality rates of 10/1,000 live births, the figure for Bihar and Uttarakhand is at 44/1,000. States with the highest birth rates have higher newborn deaths.

Uttar Pradesh, Bihar, Madhya Pradesh and Rajasthan account for 46% of all births and 57% of India’s neonatal deaths.