The BJP will probably not enjoy the 2014 campaign tail winds in the next elections. However, a lack of hope that the economic situation will improve significantly – economic mismanagement is an important Opposition charge against this government – in the next one year

If there is one thing which will distinguish the 2019 Lok Sabha elections from the 2014 polls, it is the degree of political unity against the Bharatiya Janata Party (BJP). Lessons from the first such grand alliance (which was not to be) of the Janata Dal (United), Rashtriya Janata Dal and the Congress in the 2015 Bihar elections to crucial bypoll upsets caused by the tie-up between the Samajwadi Party and the Bahujan Samaj Party (after their crushing defeat in the 2017 assembly elections in Uttar Pradesh) have made it clear that the BJP is vulnerable when it is up against a formidable pre-poll alliance.

This author had argued in a 2017 piece published in Mint that BJP’s vote share of 31% in the 2014 elections did not make it an invincible political force. The Congress has failed to cross the halfway mark with greater vote shares in the past. (Chart 1 here: BJP-Congress vote share and seat share) Opposition parties such as the Congress and the Trinamool Congress have openly declared that their primary goal is to prevent the BJP from coming to power rather than harbouring individual ambitions. Such proclamations are meant to facilitate pre-poll understandings against the BJP. All this is likely to dent to BJP’s 2019 tally in many states. The fact that the BJP has not been able to improve on its 2014 electoral performance in terms of vote share in assembly elections in most major state in the post-2014 period, lends support to this thesis. (Chart 2 here: 2014 and post-2014 assembly vote share of BJP in states) 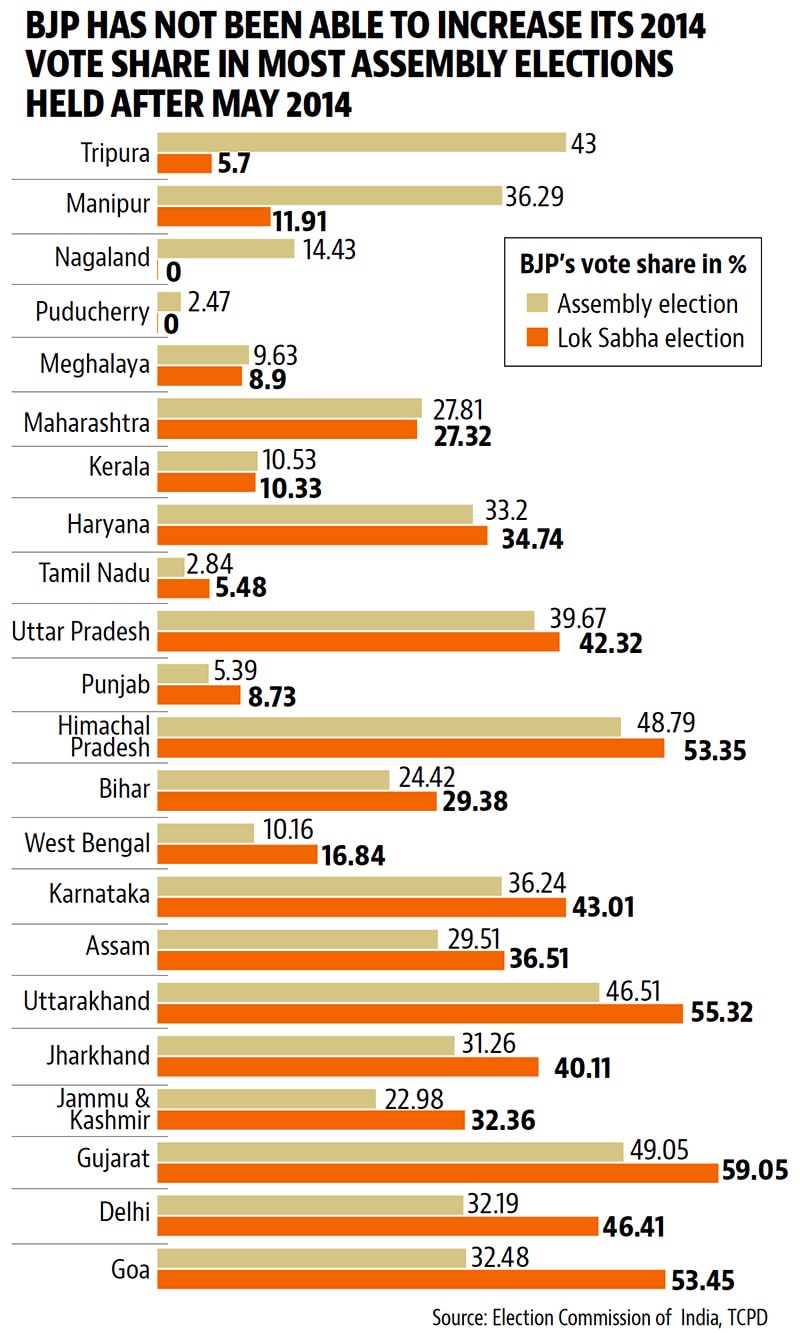 The key question to ask, however, is whether pre-poll arithmetic is going to be enough to deny Narendra Modi a second term in power. Electoral arithmetic is an important determinant of electoral outcomes in a first-past-the-post system. But it is not the only one. Political chemistry with the electorate is equally, if not more, important. It was arithmetic which brought the BJP and the Peoples Democratic Party together in Jammu and Kashmir. It was the lack of chemistry which led to parting of ways. Modi was able to sell demonetisation to the Uttar Pradesh electorate despite its short-term pain. The previous government failed to counter corruption charges convincingly, even though court judgments have acquitted the accused in cases such as the 2G-spectrum allocation. Unless the Opposition can reinvent its chemistry with the electorate, it will face a double risk: not being able to make a big enough dent in the BJP’s seat-tally and losing even pre-poll allies to the BJP camp in case of a hung Parliament. While political arithmetic is easier to analyse and quantify before election results, this is not the case with political chemistry. Myriad factors can swing the electorate’s disposition in unpredictable ways.

There is one metric which can give us some idea about the political chemistry on the economic narrative though. The Reserve Bank of India (RBI) has been conducting Consumer Confidence surveys since September 2012. These surveys ask questions about current and future (a year-ahead) perception about income, employment and the general economic situation. The difference between future and current perception on improvement in these indicators can be taken as a good proxy for anti-incumbency or the lack of it. Our analysis shows that this difference started increasing from end of 2012 and peaked in mid-2014. This was also the period when Modi was leading the BJP’s Achhe Din campaign for the 2014 Lok Sabha elections. (Chart 3 here: Difference between future and current expectations) While the electorate felt it was worse-off under the Congress-led United Progressive Alliance rule, it believed that the BJP’s coming to power will improve matters. By March 2015, these values had come down, signalling the end of euphoria around the BJP’s campaign. The declining trend continued till November 2016, but there was a short spike in December 2016. This suggests that people might actually have bought into the government’s claims that demonetisation will lead to a large-scale purge against black money and hence improve their well-being. The curve has been by and large flat since 2017.

There is an important political takeaway from this trend. The BJP will probably not enjoy the 2014 campaign tailwinds in the next elections. However, a lack of hope that the economic situation will improve significantly – economic mismanagement is an important Opposition charge against this government – in the next one year, also suggests that the electorate has still not placed its bets on an anti-Modi campaign so far. A status quo in these trends will probably mean it’s advantage BJP in terms of political chemistry in the battle for 2019.