Cyclone Titli with gusts of up to 165 kmph, made landfall in Srikakulam district of Andhra Pradesh early on Thursday morning, the India Meteorological Department said.The storm wreaked havoc on infrastructure, blocking roads and hampering emergency work. Officials in Odisha evacuated more than 3,00,000 people, suspended operations at Paradip port and cancelled many trains and flights on Wednesday.Here are the highlights:

Union minister Dharmendra Pradhan met Home minister Rajnath Singh in New Delhi today and thanked him for the role played by NDRF during operations in Odisha for Cyclone Titli. Singh has assured continued support from the Centre in disaster management, rehabilitation and reconstruction needs of Odisha, reports ANI.

Odisha chief minister Naveen Patnaik reviewed the situation after landfall of Cyclone Titli and directed officials to rush adequate relief materials and restore essential services. As Cyclone Titli is expected to move to West Bengal through Odisha, he has ordered to remain watchful and prepared, tweets CMO Odisha.

CM @Naveen_Odisha reviewed the situation after landfall of #CycloneTitli and directed officials to rush adequate relief materials & restore essential services. As #CycloneTitli is expected to move to West Bengal through #Odisha, he has ordered to remain watchful and prepared(1/2) pic.twitter.com/OSsEYkZmN3

As Gajapati is the worst hit among the districts, Odisha chief minister Naveen Patnaik has directed to deploy two more NDRF teams. District magistrates have been asked to prepare reports on house and crop damage immediately and hailed for achieving zero casualty target, tweets CMO Odisha.

As Gajapati is the worst hit among the districts, CM @Naveen_Odisha has directed to deploy two more NDRF teams. DMs have been asked to prepare reports on house and crop damage immediately and hailed achieving #zerocasualty target (2/2) pic.twitter.com/q1kI6c7pZ6

Visuals from Srikakulam in AP

Visuals from Palasa in AP

Since there was a warning about Titli, we identified vulnerable areas and shifted people to our shelters.We have a number of multi-purpose cyclone shelters across the state and we shifted people in over 1,100 shelters. It was an elaborate operation: B Sethi,special relief commissioner, Odisha, reports ANI.

North-east districts of Jharkhand have been affected due to Cyclone Titli. Rain will continue in places around Ranchi till tomorrow: BK Mandal, director, IMD, Ranchi, reports ANI.

Immediately after landfall, it was 140-150 kmph. Gradually, it was weakening. Now it will come down to 50-60 kmph. It’ll prevail till evening today and may be for sometime after night: Srinivas, duty officer, Visakhapatnam Cyclone Warning Centre, reports ANI.

“We believe that the entire state, except some western parts, is likely to receive rain throughout the day. Depending upon the rainfall, we may see some flood in coastal Odisha,” says chief secretary Aditya Prasad Padhi.

8 people have died in Srikakulam and Vijayanagaram districts, reports ANI.

Hundreds of thousands without power in AP

Government and authorities are on alert. It is the need of the hour for everyone to come forward. I am confident that this crisis will be handled in a proper way with everyone’s support: Union minister Dharmendra Pradhan

Titli will weaken gradually and is expected to turn into a “deep depression” by Friday morning: IMD

“It (cyclone Titli) is very likely to move northwestwards for next 12 hours and then re-curve northeastwards towards Gangetic West Bengal across Odisha. It is very likely to weaken gradually becoming severe cyclonic storm around noon, cyclonic storm around evening of today and a deep depression by morning of tomorrow, October 12, 2018,” states IMD.

Titli to weaken but maintain its cyclone status: Skymet forecast

Very severe #TitliCyclone will weaken but maintain its #Cyclone strength as it has been getting enough moisture feed due to the system skirting along the coast. #TitliLive #CycloneTitliAlert #CycloneTitli #CyclonicStormTitli

#CycloneTitli will maintain it's cyclone status until today evening. Will move along the coastal districts of #Odisha. #Puri, #Bhubaneswar, #Balasore and #paradip will get heavy rains with strong winds. #Odisharains #CycloneTitliAlert @SkymetWeather

No major damage or loss of life reported in Odisha

“There has been no major damage or report of casualty received from any part of the state so far. Some destruction was reported from Ganjam and Gajapati districts,” Special Relief Commissioner (SRC) B P Sethi said.

The latest India Meteorological Department (IMD) report said cyclone ‘Titli made the landfall between 4.30 and 5.30 am in south-west coast of Gopalpur near Palasa in Andhra Pradesh with an estimated maximum sustained surface wind speed of 140-150 kmph gusting to 165 kmph.

The landfall process has been completed and “the centre of eye of cyclone ‘Titli’ lies over the land,” the IMD said.

Titli made landfall in AP’s Palasa not Odisha’s Gopalpur: IMD

The landfall was in Andhra Pradesh’s Palasa not at Odisha’s Gopalpur as predicted earlier, confirms IMD.

Gajapati district most affected with road communication cut off from district headquarter town of Paralakhemundi. Other affected districts are Ganjam, Balasore, Kendrapara and Khurda. No casualty reported so far: Special Relief Commissioner, Odisha.

There were no casualties reported so for anywhere in the cyclone-hit areas because of preparedness by official machinery, says Andhra Pradesh chief minister N Chandrababu Naidu at a teleconference with the district collectors of Visakhapatnam, Srikakulam and Vizianagaram.

Heavy rain and high-speed gales in three north coastal districts of Srikakulam, Viziangaram and Visakhapatnam. Traffic movement has been paralysed as electric poles fell and trees were uprooted .

Seawaters entered houses at Uppada in East Godavari district as the maximum of height of tides was of 10ft along the coast close to the point of landfall.

Trains bound for Srikakulam have been suspended and the Andhra Pradesh State Road Transport Corporation (APSRTC) also withdrew its bus services covering the cyclone-affected areas. Power supply was shut down in the wake of warnings sounded by the IMD.

“Around 3 lakh people have been evacuated. 1112 relief camps have been opened across Odisha for the evacuees in the shelters. 105 pregnant women in Ganjam and 18 in Jgatsinghpur have been shifted to hospitals,” says Special Relief Commissioner, Biahnupada Sethi.

Damage to thatched and asbestos house, street lights. Roads are reportedly blocked in Ganjam district due to falling of trees. Power and communication disruptions have also been reported in Ganjam.

Visuals of Titli making landfall at Srikakulam in AP

Danger is not over yet: Skymet

#Danger is not over yet. #CycloneTitli will continue its movement along the coast toward north east direction. It will continue to get moisture feed. #Odisha coast will get very heavy #Rain. @SkymetWeather pic.twitter.com/GZaJQ0a0gf

NDMA lists out dos and don’ts

National Disaster Management Authority puts out a list of dos and don’ts.

Impact of Titli in Gopalpur

Several trees and electric poles have been uprooted in Gopalpur.

#Visuals from Ganjam's Gopalpur after #TitliCyclone made landfall in the region at 5:30 am today. 10,000 people from low lying areas had been evacuated to govt shelters till last night. #Odisha pic.twitter.com/HEYog0DNe7

Diameter of the cyclone’s eye is 21 kms: IMD

The eye of cyclone Titli has crossed the coast. The diameter of the eye of the cyclone is 21 kms, says IMD.

“The process of landfall has started and it will completely cross the Odisha coast in one or two hours. The system will pass close to Gopalpur,” says H R Biswas, Director of Meteorological Centre, Bhubaneswar.

Wind speed of 126 kmph at Gopalpur in Odisha

Titli made landfall between 4.30 and 5.30 am near Palasa of Srikakulam district with sustained wind speed of 140-150 kmph and gusts of 165 kmph. 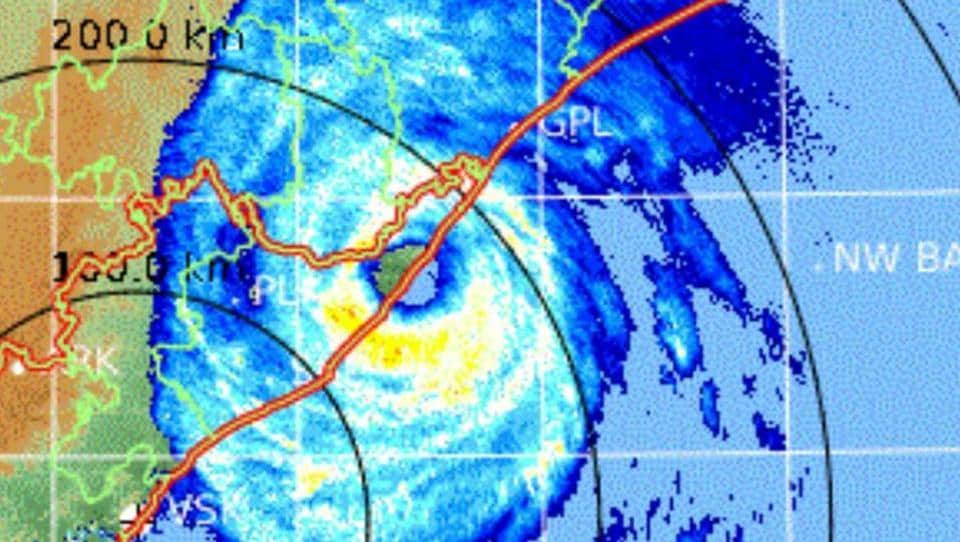 Impact of cyclone Titli as it hits coast

At 5 am, the landfall process continued with the forward sector of the cyclone’s eye entering into the land, says Director of Meteorological Centre in Bhubaneswar, HR Biswas.

17 districts of Odisha on red alert

Collectors of 17 of the state’s 30 districts have been put on red alert. said Special Relief Commissioner Bishnupada Sethi.

Titli likely to make landfall near Gopalpur coast in an hour

At Gopalpur where the landfall is likely, the surface wind speed at 4.30 am was measured at 126 km per hour at while at Kalingapatnam of North Andhra Pradesh coast, wind blew at 56 km per hour.

“It would however gradually weaken and re-curve northeastwards and move towards Gangetic West Bengal across Odisha by Thursday afternoon,” says Director of Meterological Centre in Bhubaneswar, HR Biswas.

#TitliCyclone is 120 km away from Gopalpur. It is moving at a speed of 11 km/hour & will reach Gopalpur b/w 5:30-11:30 am today.Heavy rainfall is expected. Our port warning is highest at 10. Maximum speed will be 150 km/hour: Umashankar Das,India Meteorological Department.#Odisha pic.twitter.com/yO8jGs0Kqy