If the Tamil Nadu government is hiring Bengali teachers, attribute it to two fundamental demographic shifts: the South is getting older; and the natural growth rate of population is also the lowest in the region.

The regional disparity in India’s population pyramid is increasing according to a research note by Soumya Kanti Ghosh, chief economic advisor of the State Bank of India (SBI). More than 20% of the population in southern states will be older than 65 years by 2050.

In Bihar, Assam, and Uttar Pradesh, the corresponding proportion is around 10%. According to the 2011 census, 65-plus population did not have a more than 10% share in any major Indian state.

The note predicts that these developments will trigger a huge wave of North-South migration. This, it says will create pressure on both social and physical infrastructure in the southern states.

As shown by the example of the Bengali teachers in Tamil Nadu, this has already started happening. In Erode and Karur in the state, both places where semi-skilled or unskilled labour is in demand, there has been an influx from East and Northeast India. To cater to these migrant families, the state is hiring Bengali teachers for government schools.

An HT analysis shows that the signs of such a process are already visible in the Indian economy. Southern states such as Kerala and Tamil Nadu, which have the lowest population growth rates, also have the highest unskilled wage rates. This is the biggest economic incentive for large scale North-South migration. The bulk of this migration is often circular in nature. This means that workers travel to other states for work, but do not settle their permanently. However, census data also points towards a slow but steady permanent migration from northern/eastern regions to southern/western regions between 1991 and 2011.

Cheap supply of unskilled labour from northern states benefits the south today. These gains will increase in the future as the share of post working-age population increases in the southern states. But this cheap workforce also has the potential of triggering social unrest. As migration changes linguistic profiles and puts pressure on employment opportunities for unskilled native workers, discontent is bound to rise. These flashpoints will develop simultaneously with two other North-South tensions that are also associated with the growing population disparity in India. They pertain to distribution of central taxes among states in the Fifteenth Finance Commission and a possible revision in how Lok Sabha seats are allocated among states in 2026, which could significantly increase the share of northern states.

The government of the day could choose to defer this contentious issue and push forward the date, much like it has happened in the past. In 1976, the government had put a freeze on the total number of MPs from each state until the 2001 census. This was extended to 2026 in 2000. Still, both could result in a redistribution that goes against the southern states on the grounds that their population share has come down compared to earlier. Southern states also have the lowest natural growth rate of population in India. Natural growth rate is defined as the difference between the birth rate and the death rate. Hence, this is a good proxy for population growth at a given point of time. These statistics have been taken form the latest available (2106) Sample Registration Survey (SRS) bulletin issued by the Registrar General of India. The natural rate of growth of population (per thousand people) was lower in all major south Indian states compared to the all-India average of 14. In Tamil Nadu, for instance, it was 8.7. And, in Kerala, 6.8. A comparison of state-wise natural growth rate figures with the latest average daily rural wage rates, which is a good proxy for unskilled wages, shows that Kerala and Tamil Nadu have the highest rural wage rates among large non-hill region states in India. These two are also the states with the lowest natural growth rate of population. As share of working population decline further, it is to be expected that the unskilled worker wage-gap between these states and rest of India will increase further. That workers from less well-off states north of the Vindhyas migrate to southern and western states for jobs is not an unknown fact in India. A lot of this migration does not involve immigrant workers permanently settling into these regions. This does not mean that the cultural impact of such migration is insignificant.

A comparison of language data from 1991 and 2011 census gives interesting insights in to this phenomenon. All major languages spoken in the northern/eastern region – Hindi, Punjabi, Bengali, Assamese and Odia – have seen an increase in their share of speakers outside their native states. An example can make this clearer. For Odia, this value would be share of persons who speak Odia as their mother tongue outside Odisha among total Odia speakers. For all major languages spoken in the western/southern region – Marathi, Tamil, Telugu, Kannada and Malayalam – these values have come down during this period.

These figures suggest that more people from northern/eastern India have settled in western/southern India in the post-reform period, while the reverse holds true for movement from south/west to the north/east. 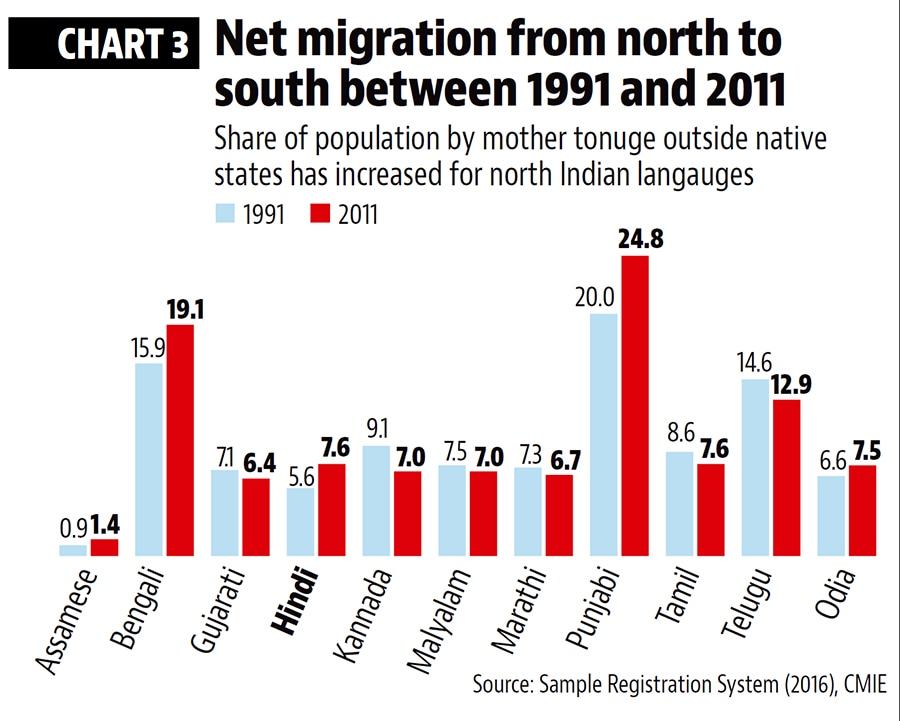 While large sections of the society welcome cheaper migrant labour for economic reasons, they are not immune to welcoming the cultural change in matters such as language or erosion in bargaining power of local labour force which comes with such movements. Such discontent can express itself as straightforward demands for slightly better jobs to be reserved for locals or attacking petty businesses run by migrant workers. Experiences from the infamous 2016 rape and murder case in Kerala and the rape of a woman in Gujarat last year are examples that pent-up discontent against migrant workers is also unleashed when an individual act can be used to target an entire bunch.

If these latent anti-migrant tendencies are clubbed with structural north-south fault lines regarding tax devolution and recalculation of parliament seats, matters could become even worse. This underlines the need for taking a macro view of the challenges which could emerge from an older South India which needs the North’s cheap labour, but might not be willing to concede its existing political and economic bargaining power in India’s democratic set-up.