India out of recession as GDP expands 0.4% in Q3

India’s gross domestic product (GDP) grew at 0.4% on a year-on-year basis in the quarter ending December 2020, according to data released by the National Statistical Office (NSO) on February 26.
Share Via
Copy Link
ByRoshan Kishore, New Delhi

The Indian economy came out of contraction zone in the second half of the current fiscal year as lockdown restrictions were eased significantly, economic activities resumed, and the government increased its capital expenditure.

India’s gross domestic product (GDP) grew at 0.4% on a year-on-year basis in the quarter ending December 2020, according to data released by the National Statistical Office (NSO) on February 26. A Reuters poll of economists had projected this number to be 0.5%. The economy suffered an annual contraction of 24.4% and 7.3% in the quarters ending June 2020 and September 2020, as per revised data released on Friday. This was largely a result of the lockdown’s disruption to economic activity. India imposed a 68-day-long lockdown — it was among the most stringent in the world — beginning March 25.

To be sure, the Indian economy will still face its largest ever contraction in the current fiscal year. According to the second advanced estimates of GDP in 2020-21, released along with the December quarter numbers, GDP is expected to contract by 8% in 2020-21.

High frequency indicators such as the Nomura India Business Resumption Index (NIBRI) suggest that the economy is already back to pre-pandemic levels. NIBRI touched 99.3 – 100 is the pre-pandemic base — in the week ending February 21. Even though Covid-19 cases are rising again in some states, as of now, India seems to have escaped a second wave of infections. Expediting the vaccination programme, which is what the government seems to have done by opening up vaccines for people above 60 years of age and those aged 45 or above with co-morbidities, could help contain the pandemic in the days to come. 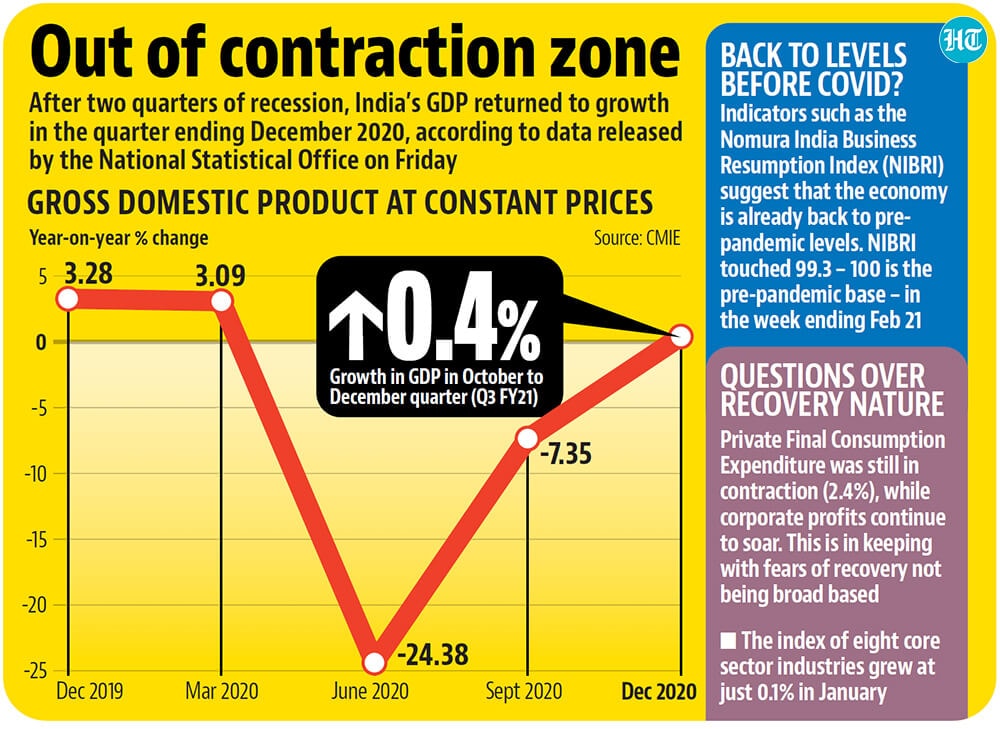 While the latest GDP numbers are in line with the narrative of strong sequential recovery in the economy, questions remain on the nature of ongoing recovery, and its ability to sustain after returning to pre-pandemic levels. Private Final Consumption Expenditure (PFCE), which accounts for more than 50% of the GDP, was still in contraction zone (2.4%) in the December quarter, even as corporate profits continue to soar. This is in keeping with fears of the current recovery not being broad based. The index of eight core sector industries grew at just 0.1% in January. Experts point out that this is a reflection of tepid growth in green-field activities.

One positive surprise in the December quarter numbers is a 2.6% growth in investment, as measured by gross fixed capital formation. That this has happened despite private consumption being in contraction zone and consumer sentiment, according to the Reserve Bank of India’s Consumer Confidence Indices, continuing to be weak, could be a result of aggressive capital expenditure (capex) by the central government. Data from Controller General of Accounts, which works under the ministry of finance, shows that the central government spent ₹1.33 lakh crore in capex in the December quarter, which is 80% of what it had spent in the first two quarters of the fiscal year. The January 2021 capex number shows a minor decline compared to December, which suggests that the fourth quarter could see some moderation in the capex push. To be sure, Government Final Consumption Expenditure (GFCE), which accounts for around 10% of GDP, also shows a contraction (1.1%) in the December quarter, which suggests that the capex push might be accompanied with rationalisation of government spending in other areas.

A sector-wise analysis of the Gross Value Added (GVA) numbers shows that services are the only broad activity-group which continues to be in contraction zone in the December quarter. Among the two most employment intensive sectors after agriculture, construction has shown a GVA growth of 6.2% while trade, hotel, transport, storage and communication contracted by 7.7%. Agriculture, in keeping with predictions of a record kharif harvest, is expected to grow at 3.9% on an annual basis. Manufacturing grew at 1.7%, although this could be due to a favourable base effect, as the sector contracted by 2.9% in December 2019.

Madan Sabnavis, chief economist at CARE Ratings, called for caution in placing too much optimism in the GVA numbers for construction, given the fact that core sector index for cement production has been contracting for three months since November 2020. “Core sector industries presented a flat growth rate of just 0.1% after 0.2% in December. This anaemic growth is a concern as it has a weight of nearly 40% in the IIP (index of industrial production, a measure of factory output) and reflects physical production that has now declined by 8.8% for the year. Therefore, while the monetary value-added number has been positive, the same does not hold here,” he said. “Cement has now de-grown for three months which is disappointing as this reflects developments in the construction sector which was expected to pick up. Quite clearly the mood in the real estate sector has not recovered as the focus is on disposing-off inventory rather than going in for new projects,” Sabnavis added.

SHARE THIS ARTICLE ON
Topics
india
india
Subscribe to our best newsletters
Subscribed to newsletter successfully
Thank you for subscribing to our Daily News Capsule newsletter.
Close Story