A total fertility rate of 2.1 is considered as the replacement rate, which is a crucial factor in population growth. It ensures the replacement of a woman and her partner upon death with no overall increase or decrease in numbers
Share Via
Copy Link
ByRhythma Kaul and Anonna Dutt, New Delhi

India’s Total Fertility Rate (TFR), or the average number of children a woman gives birth to in her lifetime, has declined from 2.2 to 2 while the Contraceptive Prevalence Rate (CPR) has increased from 54% to 67%, according data from the National Family Health Survey-5. The union health ministry released data for Phase-2 of the survey on Wednesday; data from Phase-1 was released in December 2020.

A TFR of 2.1 is termed the replacement rate, and means there will be neither an increase, nor a decrease in population. 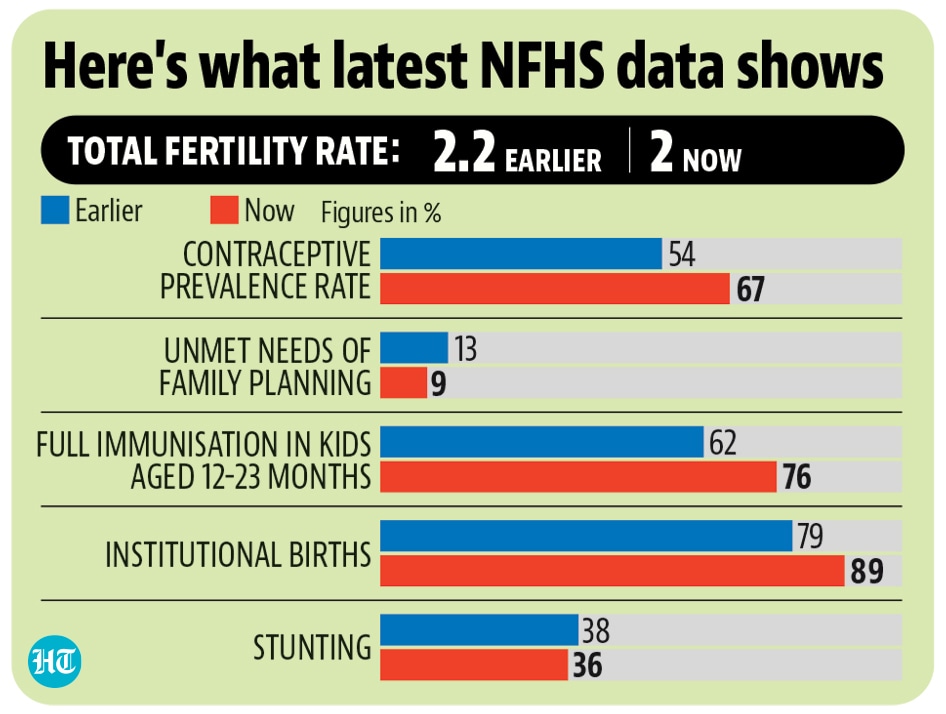 Combing both phases, four of India’s 36 states and union territories have a TFR higher than the national average. To be sure, NFHS is a sample survey, not an enumeration like the National Census.

To be sure, NFHS is a sample survey, not an enumeration like the National Census.

Meanwhile, CPR has increased substantially from 54% to 67% at the all-India level. The unmet needs of family planning have declined from 13% to 9%, the survey shows.

The government-sponsored family planning programme was launched in 1952 to slow down population growth. It initially faced challenges in terms of faulty strategy that led to women largely using contraceptives. There was also a limited basket of choice of contraceptives for young couples. Officials said the changes introduced over the years has led to improved results.

“India has for long been working on population control. In fact, India was the first country to launch a national-level family planning programme and the encouraging results that we see now are due to sustained, concerted efforts put together by the Centre, and the state governments,” a central government official said on condition of anonymity.

Mission Pariwar Vikas was launched in 2016 for improved access to contraceptives and family planning services. Special focus was given to 146 high fertility districts in Bihar, Uttar Pradesh, Assam, Chhattisgarh, Madhya Pradesh, Rajasthan and Jharkhand to ensure the availability of contraceptive methods at all levels.

NFHS-5 also highlights gains in other areas: the full immunisation among children aged 12-23 months has gone up from 62% to 76%; the number of women receiving four or more recommended antenatal visits by a health care provider has gone up from 51% to 58%; institutional births have increased from 79% to 89%; stunting has declined from 38 to 36%; and wasting from 21 to 19%.

“Yet, India’s overall population size will not shrink immediately. The country is experiencing a population momentum as a result of a demographic transition. India has a high proportion, about 30.9%, of young persons in the age group of 10 to 24 years who are in the reproductive age group or will soon be. Even if this cohort produces one or two children per couple there will still be an absolute increase in total population,” she said.

“This is good news but there is also bad news – men continue to not take any responsibility. The male sterilisation uptake is slow; the burden of family planning largely lies with women. The use of condoms has increased but it is still low. The men need to step up,” she added.

Muttreja said, “We will not know the impact of pandemic in NFHS-5; the data for 17 states and five union territories came out in December 2020 and was collected before the pandemic. We know that fertility could have increased during Covid-19 because women did not have access to family planning services and sterilisation but there is currently no actual data on this. There was also large-scale migration and when migrant workers go back, pregnancy is an outcome often. According to the 2021 UN AIDS report, COVID-19 limited access to contraceptives for 26 million couples in India which will have long term consequences.”