India has administered 29.74 million doses, with 24.31 million people receiving at least one dose as of Saturday night, placing it at the second spot in the world, ahead of the UK.

The development, however, comes at a time when new infections have been rising for the past few weeks, with daily cases crossing the 26,000 mark on Sunday, the first time since December 19, or in 85 days, sparking fears of the start of a new wave of Covid-19 infections. India on Sunday reported 26,360 new Covid cases, taking the country’s total cases to 11,385,170, according to HT’s Covid-19 dashboard. 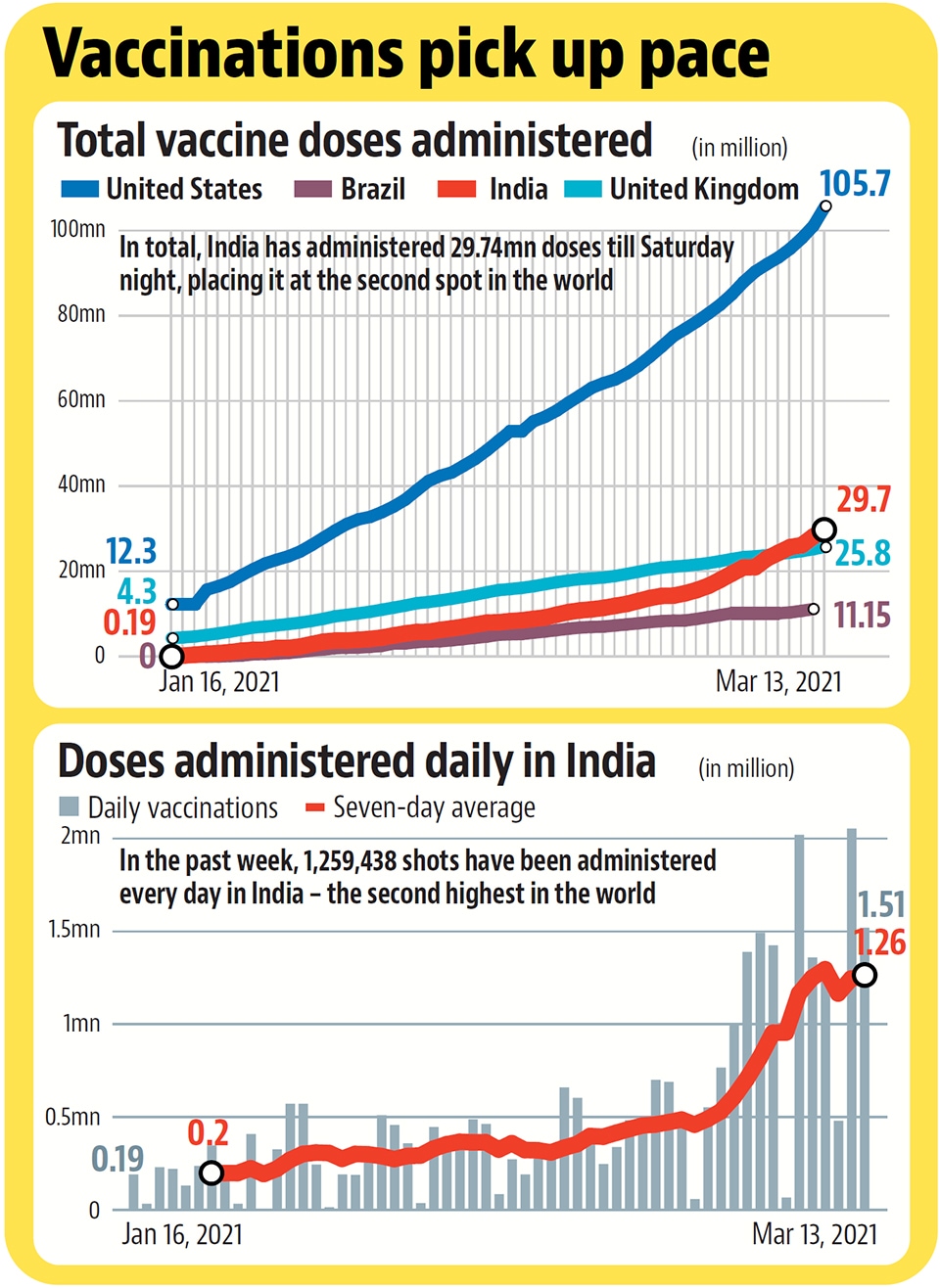 In the past week, 1,259,438 shots have been administered every day in India on average – also the second highest in the world. Much of this increase has come in the past few weeks — India’s daily dose rate has tripled in the last 20 days (it was 415,332 shots a day for week ending February 22). It is only behind the US, which has administered 2,541,597 doses a day in the last seven days. On the distant third spot, the UK has been administering 349,372 shots a day last week. The vaccination process, however, needs to be scaled up in India quickly to break the transmission cycle, experts say. “Although it is heartening to see an increase in pace, It is sort of an underaccomplishment to go at this rate as India has the capacity to cover 7 to 10 million per day,” Dr Giridhara R Babu, head, epidemiology, Indian Institute of Public Health, told HT on Saturday.

To be sure, due to the opaque nature of China’s data sharing on Covid-19 over the past year, numbers from Beijing have been excluded from global calculations, even though the country says it has administered 52.52 million doses as on February 28.

However, despite the rising vaccination, several nations including India are again trying to grapple with the start of a new wave of infections, which is threatening to thwart inoculation efforts.

Daily infections in India have been growing at an alarming rate again – from Wednesday (March 10) onwards, the country has set four consecutive records for the most single-day infections in 2021. The country has reported 21,168 new cases a day in the past week – the highest since December 27. While this is nowhere close to the peak the country has seen (over 96,000 average cases a day in mid-September), the worrying trend is that it is rising — the case rate dropped to 10,988 for the week ending February 11.

In Europe, many countries have either kicked off fresh lockdowns or are on the verge it.

In Italy, locals on Monday rushed to parks, shopping centres and to get haircuts before a majority of the country goes into lockdown on Monday to try to curb a surge in cases. Italian PM Mario Draghi backed the lockdown because infections are at three-month highs and the country’s vaccine programme has faced a spotty roll-out. Italy has suffered more than 100,000 deaths, the most in Europe after the UK.

Officials in France said the Paris region may be headed toward a new lockdown as a third wave of infections has started to fill up ICUs and low vaccine supplies have dragged down inoculation efforts.