It was meant to be a safe, ordinary and minimally invasive surgical procedure to fix a ligament tear, but medical negligence turned it into a life-altering amputation, a poignant battle with death, and, finally, a tragic demise – all in rapid succession.

It ended on Tuesday at 7.15am at Rajiv Gandhi Government General Hospital (RGGGH) in Chennai, with the death of R Priya, 17, a football player and first year student of B.Sc (Physical Education).

The immediate cause of death was organ failure, doctors said. 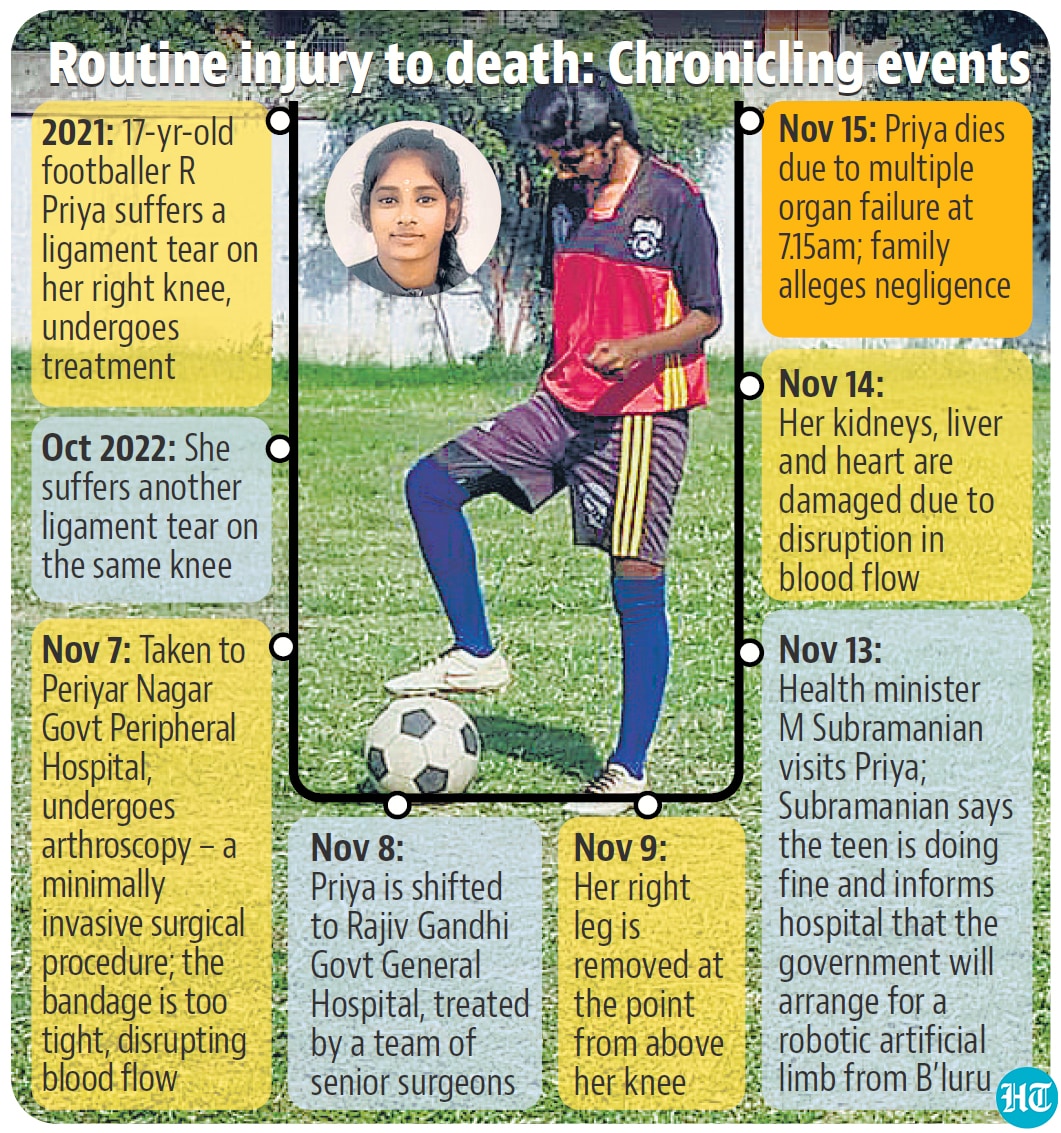 On November 7, Priya was admitted to Periyar Nagar Government Peripheral Hospital for an arthroscopy, a minimally invasive surgical procedure. The problem was a ligament tear on her right knee. It was a knee that had given the young footballer – she played at the national level – trouble previously. She had suffered a ligament tear in the same place a year ago.

This time, doctors at RGGGH recommended an arthroscopy but since her home was near Periyar Nagar Government Peripheral Hospital, her family decided to send her for the surgery there, her coach Joel Joshua said.

Arthroscopy is a procedure wherein a surgeon uses pencil-thin surgical instruments to make small incisions to diagnose and treat a variety of joint conditions, including knees and elbows. It is considered safe and can be accompanied by a few complications which surgeons say can be corrected. And it takes only around 30 minutes to treat a ligament injury and 1.5 hours for ligament reconstruction and is usually done under spinal or general anesthesia. It is especially common in sports medicine.

“In a case like this, one in a million may lose a limb but to lose life is definitely the worst-case scenario, orthopedic surgeon Dr A N Vivek said. “As a surgeon who has performed arthroscopy, I can say that the outcome is generally good. One possible complication is that during the surgery, there could have been an injury to the blood vessels. We know that is one of the complications. There is data to show that but that can be corrected,” Vivek added.

For sportspersons, there are various kinds of ligament surgeries which are done through arthroscopy, Dr Vivek Said, adding that it takes 1.5 hours for ligament reconstruction. “And in 24 hours, the patient can walk,” he said. “A ligament correction can be done in half-an hour and the patient can be mobile by the end of the day,” he added.

But things went wrong soon after the surgery.

“Due to carelessness of the doctors who performed the surgery, the compression bandage was too tight which caused extensive damage to blood flow and led to the death of blood vessels,” said a statement issued by the state health department on Tuesday. Priya was in unbearable pain.

According to Dr Vivek, a compression bandage stopping blood circulation is rare.

“The patient will be in so much pain that they will have to remove the bandage. Unless the person was insensate, a compression bandage stopping blood circulation is rate,” he said.

“And if the patient was in tremendous pain, it is the duty of the surgeon and the team to look into it. Losing circulation on the limb is a major problem. And it is the most routine protocol to check for circulation. It’s almost reflexive for a surgeon to do that. And if it was a possible injury to the blood vessel, the connection could have re-established had it been identified early, within seven hours, and the limb could have been saved. Both possibilities amount to some amount of negligence,” he said.

On November 8, Priya was shifted to the RGGGH on the advice of Periyar Nagar Government Peripheral Hospital. There doctors said that her leg had to be amputated to save her life.

On November 9, she underwent the amputation and her right leg was removed at the point from above her knee.

By then, her story had made the news. On November 13, following the furore, Tamil Nadu health minister M Subramanian visited her. They promised that a robotic prosthetic limb would be fitted onto her. On November 14, the state government transferred the two surgeons – Dr A Paul Ram Sankar, assistant professor, Orthopedics and Dr K Somasundar, casualty medical officer of Periyar Nagar Government Periphery Hospital.

But Priya did not recover.

“She was suffering from damage to her kidney, liver and heart because of her blood flow being affected,” the statement from the health department said. “An inquiry has found negligence on the doctors who performed the surgery.”

Doctors at RGGGH performed two surgeries on Priya – first an above knee amputation on November 8 and then a revision surgery to check if the dead tissues had progressed on November 14. “After the second surgery, she was on life support,” Dr Rajan said.

One by one her organs failed, Dr Rajan said. “It is not an infection which has spread. First, her kidney was affected after myoglobin (present in muscles got into the bloodstream) and she went into complete anuria (where kidneys don’t produce urine). This led to higher bilirubin affecting her liver and she developed jaundice. The contractility of her heart also began declining,” Dr Rajan said.

There was heavy police deployment in the hospital as Priya’s family protested demanding immediate action against the doctors. Her friends staged a protest outside of RGGGH.

“My child was only 17 years old. We trusted a government hospital and she is dead today,” said Priya’s mother. “The doctors said it was a small operation on her right knee ligament. My daughter suffered in pain after the surgery. Every time she cried, they gave her an injection and she’d sleep. The doctors have to be arrested.”

“It seems like there has been some amount of negligence in the first surgery but they have done the right things after that,” Dr Vivek said.

“They tried to save the limb with another surgery and when that did not work, they amputated the leg. Sudden death in such cases is caused when there is a blood clot which reaches the lung,” he said.

Subramanian admitted that there was “medical negligence”.

“When I came here the day before, she was fine. We had also informed the hospital (RGGGH) that we will arrange a robotic artificial limb from Bengaluru when she recovers. The child’s death has pained all of us.”