Home / Lifestyle / Art Culture / Mind your language: Here’s how you can stop being basic and learn Gen Z slang for a lit experience

Mind your language: Here’s how you can stop being basic and learn Gen Z slang for a lit experience

Does tea mean a beverage to you, and snack a light bite? You need to upgrade your vocabulary. Stop being basic, learn some Gen Z slang for a lit experience.

Saira Chowdhry is shook. The 16-year-old has recently joined school in the UK. The Delhi girl was excited at this lit opportunity, but there’s one experience she wasn’t prepared for – that is, not being able to understand much of what her contemporaries in the UK were saying.

It’s not as if Saira is out of her depth with the slang of her generation. Words like shook (to be amazed or shocked) and lit (something that’s fun and exciting) – part of the language of many English-speaking teens like her – come naturally to her. She can give her elders a tutorial, if needed, in Gen Z – that’s the post-millennial generation born in the mid-nineties to early 2000s – slang. 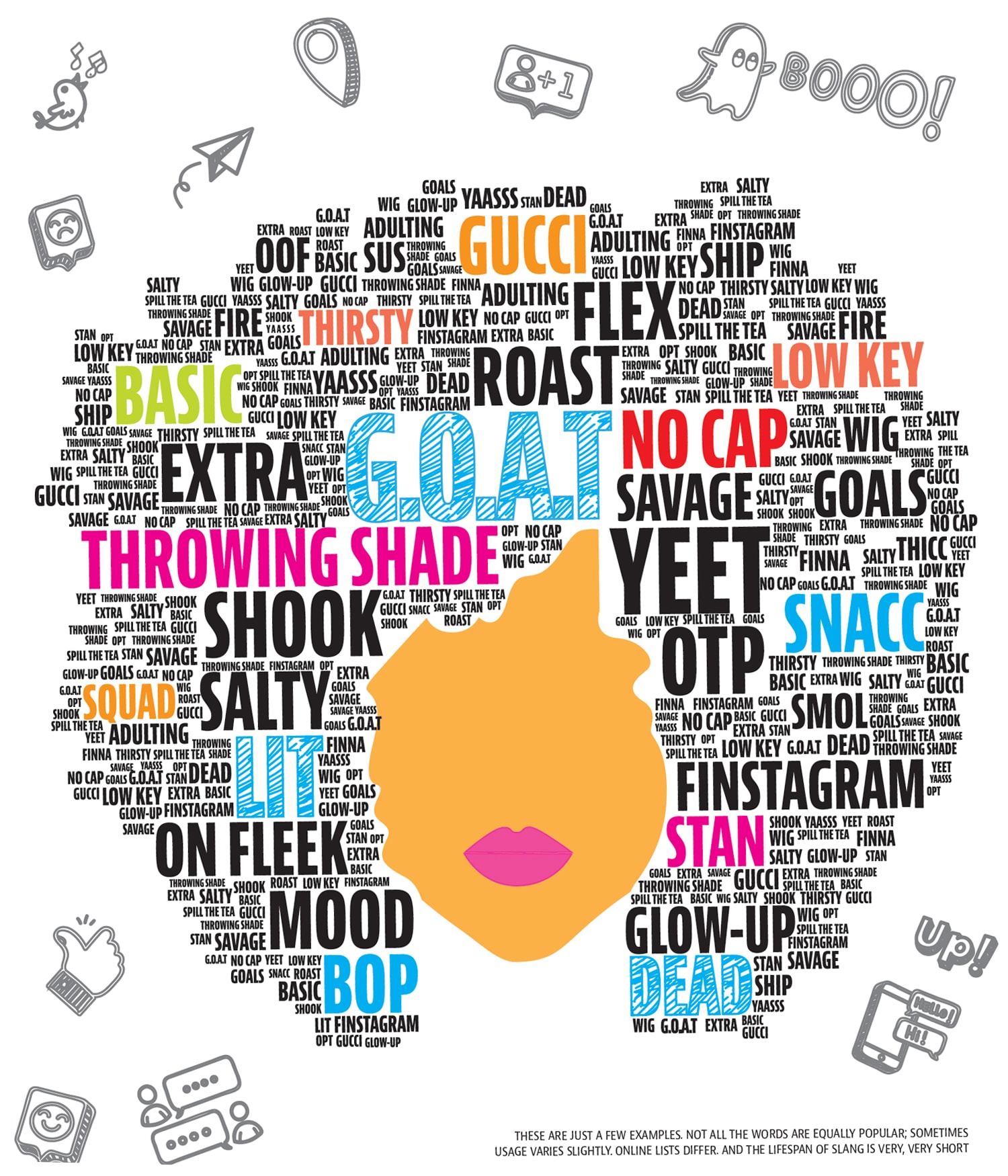 The reason for this may lie in what Aditi Ghosh, associate professor of linguistics at Calcutta University, has to say about the development of language and the way words are coined. “Languages are influenced by the dominant culture of the time and area,” she says. India’s first interaction with English happened through the British colonisation of the country, and for decades, even after Independence, it was that inheritance that marked our speech and writing of the language.

With the growing influence of American pop culture, however – films, shows, games and books – the younger generation moved away from that English. “American English is more informal. Youngsters connect to it more,” agrees Subhalakshmi Gupta, teacher of English at a school in Bengaluru.

And so their spellings and their slang are more American than British.

It’s not as if Gen Z is the first to have twisted words and their usage to suit their youthful fancies and ideas of cool. “There is no immutable meaning to a word. its the idea that we associate with them, and those idea can change,” says Ayesha Kidwai, professor of linguistics at Jawaharlal Nehru University, Delhi. “Every generation has, in its youth, subverted the conventional use of language to create its own variety. It can even be something like adding Hindi suffixes to English words.”

But perhaps at no other time has this creativity attracted so much attention, probably because at no other time has it spilled the borders of city, state and country, the way it has now. And for that we have social media to thank. “Certainly the exposure to Western cultures has increased since the nineties,” says Ghosh.

Now, when a teenager makes an exclamation of excitement or distress in Texas, it finds its way into the jargon of his peers not just in his town or country, but in places as far flung as Delhi and Mumbai.

To say that this teen jargon has the older generation shook, would be a low key (that’s kind of, by the way) underplaying of facts. No cap (which means we are being serious here). 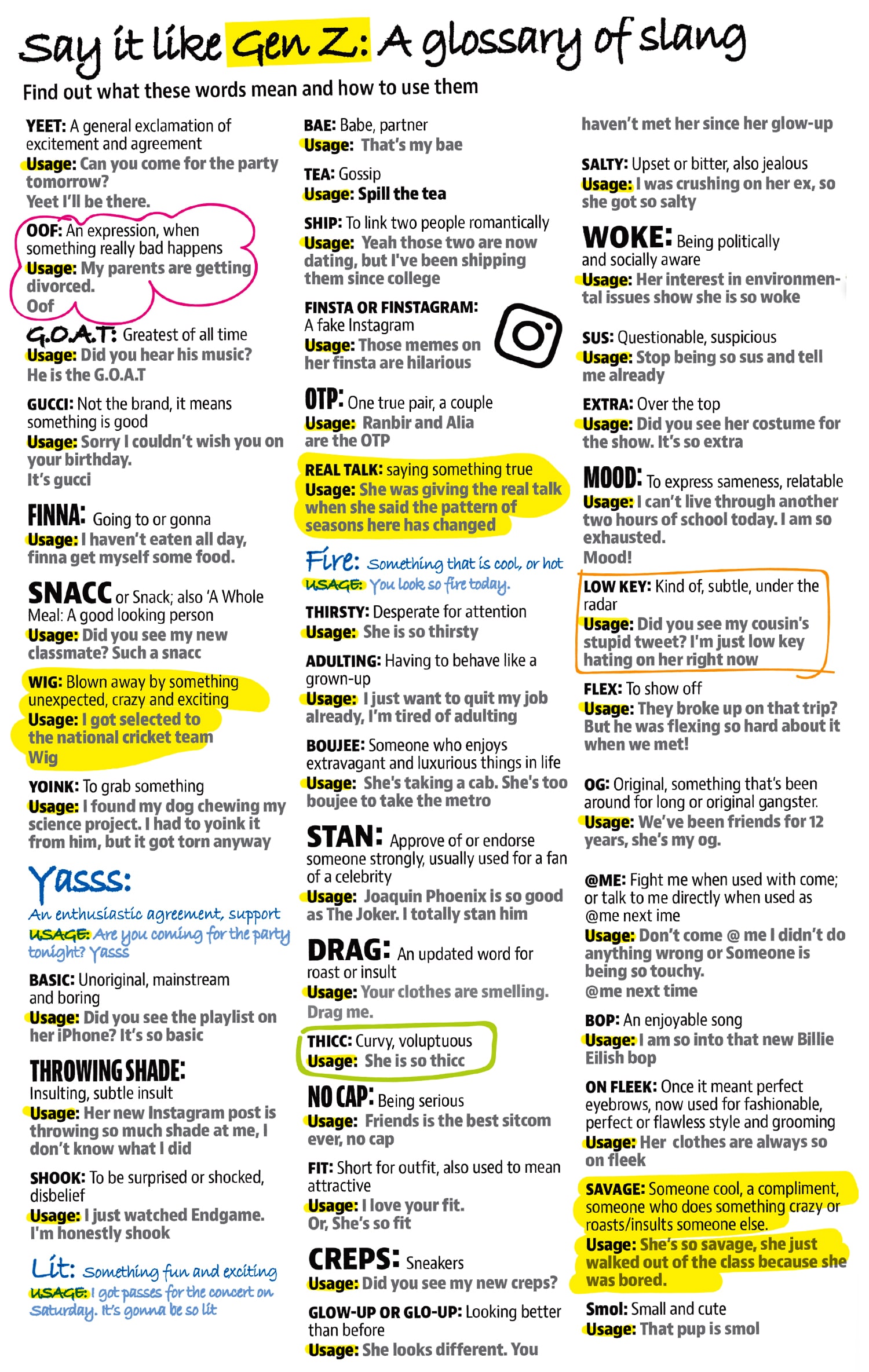 Recently, a high school teacher in Massachusetts became a sensation on the internet, when one of his students shared a list of Gen Z slang (African-American English phrases) that he had compiled. There are articles explaining slang words for those too basic (boring and unoriginal) to get it. On YouTube, millennials are trying to guess Gen Z slang.

No, that’s not making a mess. That’s an invitation for sharing gossip. It’s not an expression 16-year-old Bengaluru resident, Amrutha Varshini, is likely to use before her parents or teachers, however. “I have to be more careful of how I talk in front of the elders. They keep saying they can’t understand me if I talk to them the way I talk when among friends. I must have told my mother a thousand times that ‘bro’ is not short for brother. It can be anyone I am close to. But she will still keep asking me why I am referring to a girl as ‘bro’,” says Amrutha with a laugh.

The gender neutrality of word usage is something that Gupta has also noticed in her students. And it extends to their use of slangs. “Mostly girls and boys of our generation use the same expressions,” says 15-year-old Adnan Baig. There might be a few exceptions – words like spill the tea or bae or extra are more likely to be used by the girls, says Saira ­– but by and large, they speak a common language, exclusive to their generation.

The real talk (and that means the truth, by the way) about the origin of most of these expressions leads back to social media usage. Seventeen-year-old Megha agrees. “One person uses it on Instagram. Others pick it up and soon everyone starts using it. The more popular the person, the more quickly it spreads,” she says.

Of course not all the words are as widely used. The usage can vary. So if your inability to understand these words leaves you salty, you may either be feeling bitter or jealous, depending on how your Gen Z friends see the words.

The real catch, though, is how fast slang keeps changing. Expressions like “take a chill-pill”, chillax (that’s the combination of chill and relax), amazeballs, hella, OMG, WTF and YOLO, which were all part of millennial-speak in even a few years back, may now get you branded as outdated.

As for keeping up with Gen Z slang, on one of the lists of current teen jargon available on the internet, a youngster comments, “We just use the latest meme until it dies in a few weeks and then we move on to the next… If you are older than gen z don’t even try using our lingo...”.

So, if any of the words on our list are already out of favour with this generation, we can only say, don’t come @me (fight me, argue with me,).

Saira pegs the average age of those using this slang between 13 and 17 years. So anyone born before the mid-1990s would anyway feel ancient.

(The words listed in the story and graphic are just a few examples. Not all the words are equally popular; sometimes usage varies slightly. Online lists differ. And the lifespan of slang is very, very short.