In the land of cane: Sweet talk done, it’s time for a bitter battle

The NCP wants to retain its home ground, while the BJP plans to unseat it. Who will win?

By targeting National Congress Party (NCP) chief Sharad Pawar in his first campaign rally for NDA in Wardha in Vidarbha, Prime Minister Narendra Modi on Monday indirectly acknowledged the former as the main opponent in the poll battle for Maharashtra.

As the two main alliances clash for control of the 48 seats in Maharashtra, Pawar has indeed emerged as the central adversary for the Bharatiya Janata Party (BJP) in the upcoming elections. He has scripted a majority of the Opposition’s electoral moves in the poll season – from ensuring the Congress-NCP alliance to recently getting the Maharashtra Navnirman Sena (MNS) on board to campaign for their candidates.

Nowhere is the Pawar play more pronounced than in his backyard of western Maharashtra.

Spread across six districts and 12 parliamentary constituencies, this former NCP-Congress bastion is now set to witness a direct poll battle between the BJP and NCP. 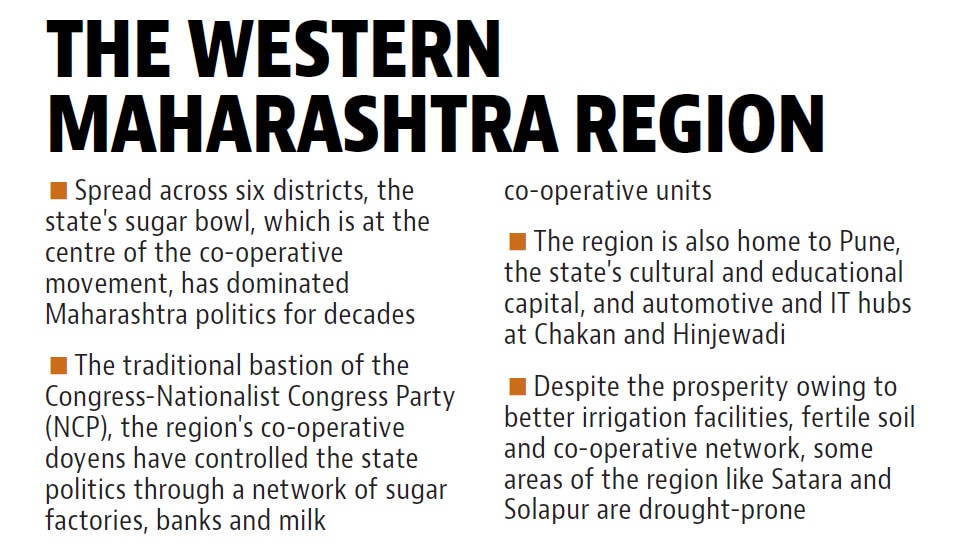 While the NCP hopes to retain the home ground by winning maximum seats in this region – it managed to win four seats here even during the 2014 Modi wave – the BJP is hoping to unseat the Opposition from its traditional bastion.

Besides four seats in Lok Sabha, nearly 19 of the 41 Assembly seats of the NCP come from this region.

Of the 12 seats, the NCP and BJP-Sena will see a direct poll battle in seven seats – Baramati, Madha, Ahmednagar, Shirur, Maval, Satara and Kolhapur. The Congress will contest only three seats here – Pune and Solapur against the BJP and Shirdi against the Sena. The allies have given two seats – Sangli and Hatkannagle – to former rival and now ally Raju Shetti’s Swabhimani Shetkari Paksha (SSP).

In Baramati, the BJP has tried to corner Pawar’s daughter and sitting MP Supriya Sule by putting up a local candidate, Kanchan Kul, wife of a sitting MLA, Rahul Kul from the region. In Satara, the BJP loaned its candidate Narendra Patil to take on NCP MP Udayanraje Bhosale.

“For a long time, seats such as Baramati were not even given strong candidates. This time around, it is not the case. The BJP wants to challenge the Pawars on the hometurf and there are several amongst us, including from the Congress, who are fed up of Pawar’s politics,” said MLA Kul. Despite the fierce poll battles, a majority of the contenders in the fray in western Maharashtra on both sides trace their origins to the Congress-NCP and are fighting the poll battle to protect their personal fiefdoms.

“In western Maharashtra, until 2014, the battle was between the Congress and NCP. The politics was run by a score or so of prominent families, who controlled power through co-operative networks. Over a decade, the NCP edged out Congress’ leaders. Now, the battle is between the NCP and BJP. The BJP has expanded its base by taking on members of these same families, who have shifted for opportunity or have lost clout owing to mismanagement of co-operative factories, banks and are trying to retain power,” said a senior NCP leader from the region.

“The generation next of Maratha leaders is comfortable with the BJP and are grouping under the saffron party for power,” he said.

Given that this may be one of the last polls where 78-year-old Pawar may play an active role, he has gone the extra mile to bring various warring factions of his party in the region together.

“It’s clear that if we lose now, we will be out of power again in the state in the Assembly polls. Not many of us are used to staying out of power for so long,” said another senior NCP leader.

“The BJP’s win in 2014 threatened Marathas, who were the power centre in the state and ruled from western Maharashtra for long. This is the dominant but subtle poll narrative by the NCP in the region and will be an important factor in the polls,” said Dr Nitin Birmal, a political analyst and associate professor of political science at Dr Ambedkar College, Pune.

A section of Marathas have been feeling disenfranchised after the BJP government came to power in 2014, although many in the community have also voted for saffron parties in 2014 and later in the 2017-18 civic polls.

The BJP government’s efforts in the past four-and-a-half years to reform or change the existing co-operative structures of factories, banks and milk co-operatives controlled by the Congress-NCP heavyweights have also been seen as attempts to weaken the Maratha power base.

Some of this loss of power was expressed through silent Maratha protests that demanded reservation for the community that accounts for 32% per cent of the state’s population.

The BJP’s counter to the opposition’s narrative is the 16% reservation offered by their government through a bill to the community in jobs and education. While BJP leaders believe the reservation bill will ensure support of a chunk of Maratha voters for the party in the region, not all political analysts think so.

“I don’t see the reservation bill granting BJP loyalty or votes for the Maratha community. On the other hand, several educated unemployed youth from the community, who earlier used to migrate to cities like Pune, Mumbai for jobs, seem dissatisfied with the kinds of jobs that are available today. This could also be tapped by the Opposition,” said Birmal.

The Other Backward Castes (OBC), traditional supporters of the BJP, are also irked with the Maratha reservation bill. Among the OBCs, the Dhangars or the shepherd community that has a significant presence in nearly four to five constituencies in the region, are upset with the government’s failure to grant them reservation on the lines of schedule tribes.

While the state has taken a cabinet decision to pass on majority of the benefits that scheduled tribes enjoy to Dhangars, the community is still feeling cheated.

There is no telling how this community or the Marathas will vote in the polls, whether they will vote en bloc or their votes will be fragmented, but as of now they are at the centrestage of poll politics in the region.

While the agrarian crisis in western Maharashtra is not pronounced owing to sugarcane cultivation here and the system of fixed prices for cane, the glut in production means farmers rarely get the fair and remunerative prices (FRP) they want from the millers. Even today, the arrears from millers to cane farmers stand at nearly ₹5,000 crore. In Hatkanangale and Sangli constituencies, where farmers’ leader Raju Shetti and one of his candidates will contest, this would be an election issue.

Beyond cane, farmers, like in the rest of the state, are hassled by rising input costs and falling prices of produce. They blame the ruling government for failing to deliver on their agrarian promises. In drought-prone areas of the region in Satara, Sangli, Solapur, Ahmednagar, the angst is visible.

“This government has not understood farmers’ issues. They promised, but nothing seems to have improved on ground. Loan waiver was given, but with so many conditions that only a few from our village were found to be eligible. Modi is a good PM, but the BJP has failed us,’’ said Gulabrao Dhokhe, from Baburdi village in Ahmednagar district.

Dhoke owns 50 acres of land, now split between three of his sons, but said agricultural income from even such a large tract of land is not enough for the family during years of adversity.

Ultimately, in western Maharashtra, the poll battle will be fought on local issues, local candidates and caste calculations, but what will also count is how the alliances work with each other. Both the BJP-Sena as well as the Congress-NCP leaders on ground since 2014 Assembly polls have been seeing each other as rivals.

The other factor is the internal rivalry within the different factions of the same party in a district.

For instance, in Maval, sitting MP Shrirang Barne’s biggest challenge is to ensure the BJP legislators in his area work and campaign for him. Barne’s competitor is Parth Pawar, son of former deputy chief minister Ajit Pawar, and there is speculation that the BJP legislators and local leaders may not want to take on the Pawars for a Sena candidate.

In Kolhapur, NCP’s Dhananjay Mahadik faces trouble with Congress leader and former minister Satej Patil not being keen on helping him out, after the former went against the Congress in local polls.

In Ahmednagar, while the BJP has given ticket to Sujay Vikhe Patil, there are doubts whether all BJP legislators in the region will support him. At least one of these legislators, Shivaji Kardile is the father-in-law of Vikhe’s opponent and NCP candidate, Sangram Jagtap.

In Satara, too, despite Pawar asking his party leaders to work together, not all legislators get along or want to support the party’s sitting MP and candidate Udayanraje Bhosale