The Congress will release its manifesto for the Lok Sabha polls on Tuesday.The manifesto document will be released by Congress president Rahul Gandhi and all top party leaders, including former prime minister Manmohan Singh, will be present at the party’s Akbar Road headquarters in Delhi.Prime Minister Narendra Modi will on Tuesday address a poll rally in Odisha, and will later head to Bihar to address two public meetings in Bihar. Taking forward BJP’s poll campaign, Amit Shah will address three public meetings in Tamil Nadu and a road show in Karnataka. :

Appears some that points drafted by Congress president’s friend in Tukde Tukde gang when it deals with J-K: Arun Jaitley

Even though there was a drafting committee, but it appears that some of the important points have been drafted by the Congress president's friend in Tukde Tukde gang when it deals with J&K: Shri @arunjaitley #BharatBoleModiModi

Cong does not deserve even single vote for promises like doing away with sedition law: Arun Jaitley

Congress does not deserve even single vote for promises like doing away with sedition law, says Arun Jaitley

‘Congress manifesto is about balkanisation of India’: Arun Jaitley

‘Congress manifesto is about balkanisation of India... The manifesto has agenda that will break the country, says Arun Jaitley

Will get minimum 30 seats in Tamil Nadu: Amit Shah

“We have formed a strong alliance in Tamil Nadu and will get a minimum of 30 seats in the sate.

DMK and Congress have fielded corrupt politicians like Kanimozhi, Karti Chidambaram and A Raja,” said Amit Shah while addressing a public meeting in Tamil Nadu.

“Last time we had not marked a big victory in Tamil Nadu. Only BJP’s Pon Radhakrishnan had won.

However, we made two people, Pon Radhakrishnan and Nirmala Sitharaman, from Tamil Nadu as union ministers,” said Amit Shah in Tamil Nadu.

BJP will not give Kashmir to others: Amit Shah

“We are making tough against terrorism. During the BJP government, the IAF destructed terrorist camps in Pakistan.

But,Congress government did not take any steps to contain terrorism. We should punish terrorists who killed our soldiers. However, the Congress is not ready for that.

The Congress party says it will review the Armed Forces (Special Powers) Act and the Disturbed Areas Act. Congress is not concerned about the nation’s security.

“We BJP will not give Kashmir to others. It is our terrain,” said Amit Shah while addressing a rally in Tamil Nadu.

“The way PM Modi’s government implemented GST and demonetization, in haste, that affected small businesses; that also led to increase in unemployment,” said BSP chief Mayawati while addressing a public meeting in Odisha.

Ahead of the Lok Sabha polls, Bahujan Samaj Party (BSP) supremo Mayawati is in Odisha has kickstarted her election campaign.

“Congress will radically simplify the GST regime with a single moderate rate of tax, zero rating of exports, and exemption for essential goods and services. We also promise panchayats and municipalities a share of GST revenues,” Congress said in manifesto.

Congress will reverse the trend of declining defence spending under the NDA government, and increase it to meet the requirements of the Armed Forces. We will expedite all modernisation programmes of the Armed Forces in a transparent manner. We will improve social security, education and health facilities for our Paramilitary Forces and families,” the manifesto adds.

“For farmers, Congress promises to put them on the path from “Karz Maafi”, to “Karz Mukti”. This will be done through remunerative prices, lower input costs, and assured access to institutional credit. We will present a separate “Kisan Budget” every year. We will also establish a permanent National Commission on Agricultural Development and Planning,” Congress said in its manifesto.

“Congress promises to enact the Right to Healthcare Act and guarantee every citizen free, diagnostics, out-patient care, free medicines and hospitalisation, through a network of public hospitals and enlisted private hospitals. We will double expenditure on healthcare to 3 per cent of GDP by 2023-24,” it adds.

“To the youth of India, Congress pledges to make jobs our no.1 priority, both in the public and private sector. We will ensure 34 lakh jobs in the public sector by;

a. Filling all 4 lakh central government vacancies before March 2020.

b. Persuading the state governments to fill their 20 lakh vacancies.

We will also provide a fillip to private sector jobs by;

a. Rewarding businesses for job creation and employing more women,

b. Requiring businesses with over 100 employees to implement an apprenticeship programme,” the manifesto adds.

7. Quality Education For Every Child

‘Chowkidar can hide but not run’ says Rahul Gandhi

‘Chowkidar can hide but not run. I don’ t understand why the PM doesn’t address you, why doesn’t he answer your questions like this, why is he scared of you,”says Rahul Gandhi.

“South India feels hostility from the PM, they feel they are not being included in the decision making in the country. This is why I am contesting from Wayanad,” said Rahul Gandhi.

NYAY and employment among 5 big ideas in Congress manifesto

Five big ideas in manifesto, the first being NYAY.

“PM Narendra Modi said Rs 15 lakh will be put. I asked manifesto committee to give me the truth. How much can we really put into bank accounts of poor people. They gave me a number. Rs 72,000. Garibi pe vaar, Rs 72,000. In five years, 3.6 lakh. This will put money into pockets of poor. 2nd PM modi jammed economy with notes ban. This will jumpstart economy by putting money in hands,” said Rahul Gandhi.

“Congress promises 150 days of MNREGA in its manifesto. We have also decided to bring a separate farmer’s budget and 6% of the GDP will be contributed to education, and will also make non-payment of loans by farmers civil offence instead of criminal one ” said Rahul Gandhi.

Didn’t want a single thing in this manifesto that is a lie: Rahul Gandhi

“This manifesto is a massive step for Congress. When we started process a year back, I spoke to Chidambaram and Rajeev Gowda, I said don’t want a single thing in this manifesto that is a lie. We are hearing large number of lies being spoken by PM,” said Rahul Gandhi.

“We took a year's time to cover all the objectives in the manifesto. We took opinions from the people and their wishes have been scripted in the manifesto,” said Rahul Gandhi at Congress’ manifesto launch.

Idea is to set narrative for 2019, says Chidambaram at Congress’ manifesto release

‘Our manifesto will script bright future for country’: Congress

‘Our manifesto will script bright future for country’, said Congress ahead of the release of party’s 2019 manifesto. 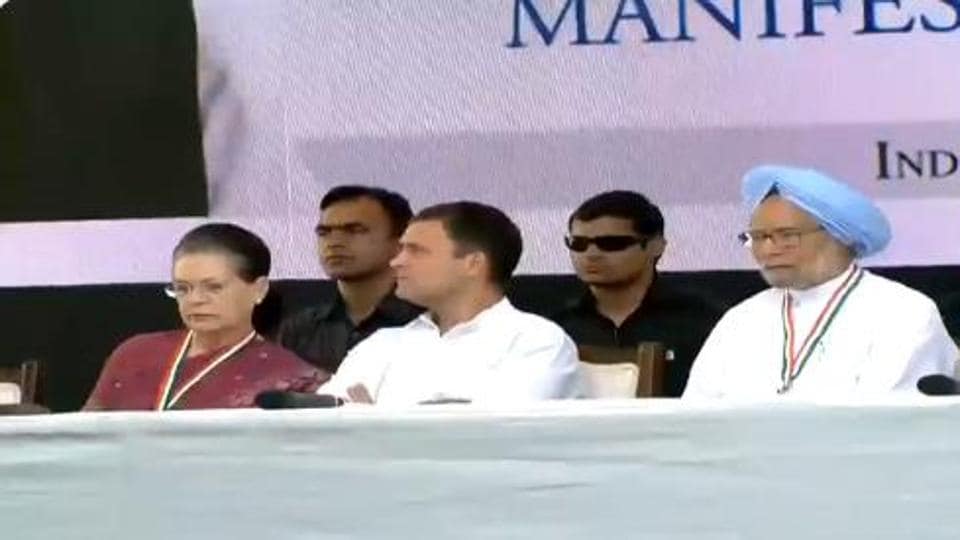 You trusted the BJD for 19 years, but it’s now time for transformation: PM

“You trusted the BJD for 19 years, but it’s now time for transformation and to bring BJP again at the Centre so as to facilitate double-engine growth,” said PM Modi in Odisha.

We identified 8 cr fake people who were availing subsidies: PM

“Parties like Congress and BJD conspired to keep the poor of the country poor, they deceived the poor. They treated them as vote-bank; and because of this don’t know how many Dana Manjhis don’t even get ambulance,” said PM Modi in Odisha.

Introduced a tribal ministry for the first time: PM Modi

“Tribal people have been in the country for a long time but none of the previous governments had a special ministry for them. For the first time, the Centre introduced a tribal ministry to work towards the welfare of the many tribes in the country,” said PM Modi in Odisha.

If BJP was in power in Odisha, development would have been faster: PM

“Had BJP been in power in Odisha, development in state would have been on a much faster pace, because the state government here doesn’t move. I have worked for you despite not getting from the state,” said PM Modi.

Credit for transformation in country goes to the people: PM Modi

“Ever since you elected me in Delhi, I didn’t take a single a leave in the last five years. I put in as much efforts that are possible by a human body,” said PM Modi in Odisha.

PM Narendra Modi is set to address a public meeting in Odisha’s Kalahandi.

A neck-and-neck electoral battle in on the cards in the assembly constituency of Pakke-Kesang, the newly created district in Arunachal Pradesh, where both contesting candidates of the ruling BJP and the Congress claim to enjoy equal popularity.

BJP candidate B R Waghe and Congress nominee Atum Welly will vie for the seat, which was earlier a part of the East Kameng district.

The Pakke-Kesang assembly constituency was in the news post the 2014 assembly polls, as former deputy chief minister Kameng Dolo, who won as a Congress nominee, had to give up the seat, following a Gauhati High Court order that declared his election null and void.

Putting an end to suspense, the Congress has announced Mohan Joshi as its candidate from Pune Lok Sabha constituency in Maharashtra.

The announcement was made late Monday night by the Congress in an official release, a day after its city unit started poll campaigning in the constituency though it had then not declared its candidate.

Joshi, popularly known as ‘dada’ in political circles, is considered a loyalist of the Congress since 1972.

Bahujan Samaj Party (BSP) supremo Mayawati is scheduled to visit Odisha on Tuesday to kick off her election campaign.

Mayawati will address a public rally at Baramunda Ground in Bhubaneswar, a statement from the party read.

The BSP is going solo in Odisha.

After Odisha, Mayawati will address poll rallies in Andhra Pradesh, Telangana and Maharashtra. She will be back to Lucknow on April 5.

‘Should be limit to lies’: Tejashwi Yadav’s tweet before PM’s Bihar rallies

Prime Minister Modi will address two back-to-back rallies in Gaya and Jamui, which have witnessed several violent Maoist incidents in the recent past, on Tuesday. Bihar chief minister and Janata Dal(United) chief Nitish Kumar will also campaign for the Lok Sabha election from Gaya with the Prime Minister.

“Modi ji is coming to Gaya once again. Prime Minister @narendramodi, listen to the speech that you gave the last time when you were in Gaya carefully. I am sure you will be embarrassed. Does one exaggerate so much? There should be some limit to the lies, Prime Minister,” Tejashwi Yadav tweeted in Hindi on Tuesday.

“Dear PM @narendramodi Ji, Just reminding what you had promised to Bihar & Bihari’s on 10-03-2014 in Purnea. You promised to give Bihar- * Special Status * Special Package *Special Attention Before visiting Bihar & to befool Bihari’s again first see the MIRROR & answer thyself,” he wrote.

The Congress party is likely to launch its crowdsourced manifesto for the seven-phase Lok Sabha elections on Tuesday.

Congress president Rahul Gandhi has been outlining the party’s agenda at election rallies and many of these are expected to be part of the manifesto including the much-hyped minimum income scheme.