Startups are seizing opportunities overlooked by global giants, though ops and funds are still major obstacles to growth in India

Globally the med-tech industry is humongous, but it serves mostly the needs of the Western world, ignoring countries like India. What does this mean to Indian players?

According to V Premnath, director, Venture Center these dismal figures are an opportunity. Says he , “India makes up for less than 1% of the global med-tech market valued at USD 400-500 billion. However this is an opportunity for entrepreneurs as global players are not very keen in the Indian market and the needs of Indians are underserved.”

Another observation by Premnath is that “med-tech industry is dominated by a few players and the margins are attractive. Also, the industry has a track record of mergers and acquisitions. The industry has space for both products with new performance and benefits and also for products that change the cost structure. Again perfect conditions for Indian med-tech entrepreneurs!”

“There are many opportunities present in the med-tech industry, but for startups there are plenty of challenges,” says Anuya Nisal, founder of Biolmed Innovations that has developed Serioss, a bone replacement material.

BiolMed works in the area of developing and manufacturing bioabsorbable implants (implants that dissolve in your body over time).

“Bones can develop defects (or voids) due to trauma, infection, cancer or ageing. Currently, doctors use auto graft that is they take the bone mostly from the pelvic region and graft it where required.

“This involves two surgeries and is very painful to the patient. The synthetic grafts made from ceramic, metals etc. are available, but do not perform as well as auto grafts.”

These med-tech startups are seizing the opportunity that is being overlooked by global giants. All startups do face obstacles in their paths, but how different is it to be a med-tech startup in the times of IT, e-comm, et al?

Tushar says, “An IT startup will be able to find plenty of guys with training in IT but for a startup like ours it is difficult to find people.” While money is always a challenge for startups, the problems is intensified for a med-tech company. Says Nisal, “The product development cycle is so long. Our polymer based on silkworms took us five years. This means that the money required is much more.” 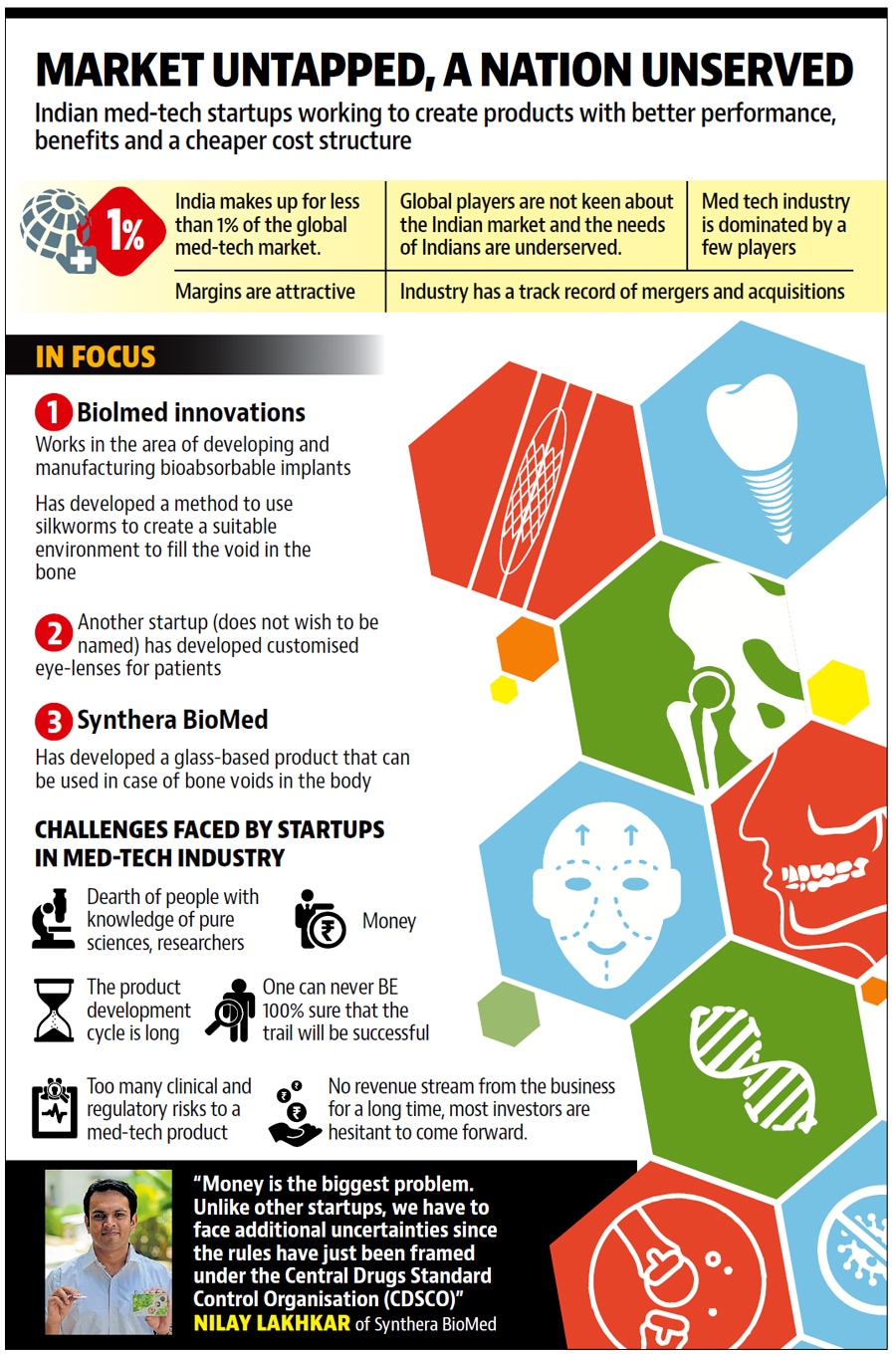 Tushar agrees. “Any other startup can develop a minimum viable product in a much shorter time compared to a startup like ours. We need specialized investors who understand the product and its development cycle,” he says.

Nilay Lakhkar of Synthera BioMed that has developed a glass based product to be used in case of bone voids in the body says “Money is the biggest problem. Unlike other startups, we have to face additional uncertainties since the rules have just been framed under the Central Drugs Standard Control Organisation (CDSCO).”

Nilay has developed a glass based bone graft material that can be customized depending on where it has to be used.

trials while Tushar has spent Rs 4 crore before even conducting clinical trials. Nilay had to postpone the setting up of his factory because he was not sure how long it would take for him to get the approvals.

regulations that govern medtech companies and startups in Jan 2018, there still needs more to be done. The other issue related to regulations is the ad hoc nature, given that the body has yet to get a deeper understanding of the devices business, they said.

Earlier all medical devices came under the Cosmetic and Drugs Act but since January 1 2018, the government has constituted the Central Drugs Standard Control Organization (CDSCO) to look into rules governing the devices industry.

THE ELEPHANT AND THE FLEA

After tackling the financial, human resources and regulatory hurdles peculiar to the industry, a startup has to sell the product. “Before CDSCO, startups made products that were not necessarily up to the mark and sold them cheap. The products failed and so the doctor fraternity does not trust made in India products. So we have to work against this perception that our customers have” says Nilay.

“How can a small startup match the marketing prowess of a giant like say Medtronics? I cannot employ thousands of sales representatives to cover the doctors across the country.It is too expensive, ”says Nilay

Given the challenges all three agree that the best way forward is to tie up with an industry giant.