Boris puts in papers after 59 resignations over three days

Months of defiance ended almost with a shrug as Johnson stood outside 10, Downing Street and announced his “painful” resignation, conceding that his party wanted him gone.

British Prime Minister Boris Johnson announced his resignation on Thursday amid a mass revolt by top members of his government, marking an end to three tumultuous years in power in which he brazenly bent and sometimes broke the rules of UK’s politics.

Months of defiance ended almost with a shrug as Johnson stood outside 10, Downing Street and announced his “painful” resignation, conceding that his party wanted him gone.

“In the last few days, I tried to persuade my colleagues that it would be eccentric to change governments when we’re delivering so much and when we have such a vast mandate,” he said. “I regret not to have been successful in those arguments, and of course it’s painful not to be able to see through so many ideas and projects myself.’’

He said he was “sad... to be giving up the best job in the world”, justifying his fight to stay on to deliver the mandate he won in the December 2019 general elections. He also promised support for Ukraine in the war against Russia “for as long as it takes”. He said it is “clearly now the will of the parliamentary Conservative Party that there should be a new leader of that party and therefore a new prime minister”, adding that “them’s the breaks”.

However, Johnson defied pressure to step down immediately, insisting he planned to stay on as prime minister while his party picks his successor.

The timetable for that process will be announced next week. The last leadership contest took six weeks. The brazen 58-year-old politician’s time in office was defined by Brexit, the Covid pandemic and controversy about his reputation for mendacity. He was finally brought down by one scandal too many — this one involving his appointment of a politician who had been accused of sexual misconduct.

The crisis began when Chris Pincher resigned as deputy chief whip amid accusations that he had groped two men at a club, triggering a series of reports about past allegations against Pincher. Johnson offered shifting explanations about what he knew and when he knew it, heightening the sense that the PM couldn’t be trusted.

The crisis came to a head on Tuesday when health secretary Sajid Javid and finance minister Rishi Sunak resigned within minutes of each other, setting off the wave with 59 cabinet secretaries, ministers and lower-level officials quitting the government. Johnson clung to power, defiantly telling lawmakers Wednesday that he had a “colossal mandate” from the voters and intended to get on with the business of governing. 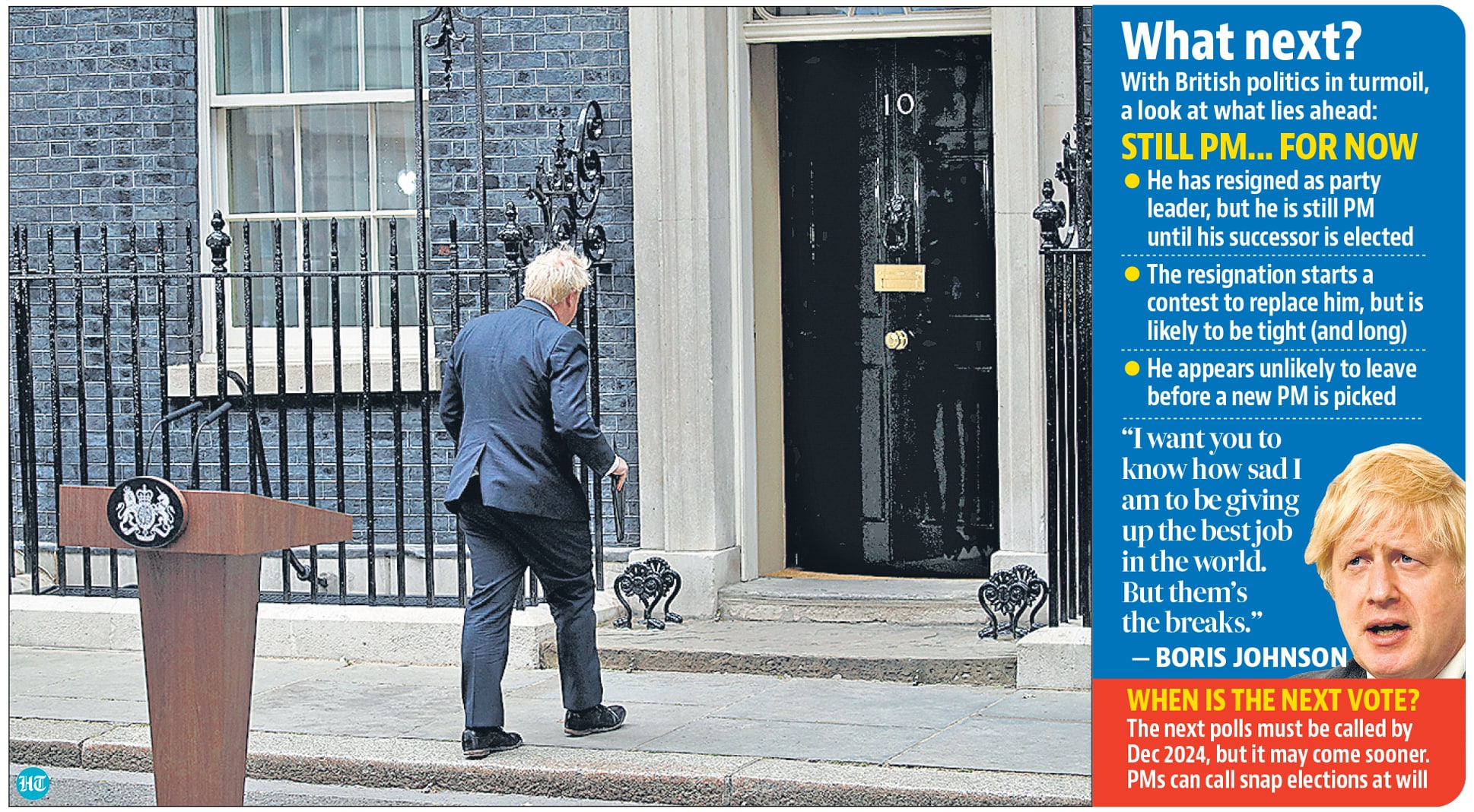 Brexit to exit: The rise and fall of Boris Johnson

In his rise to power, Johnson showed many of the same habits and abilities that would carry him far but also spell his downfall. He became known for his light regard for the truth and his glib and offensive marks.

Johnson’s popularity had already slumped over a series of lockdown-breaking parties in Downing Street, which saw him become the first PM to receive a police fine. Many Britons reacted to news of his departure with relief and surprise, given the way he had hung on before.

“To be honest, I think a lot of the public will want to see him gone straightaway,” said Tim Bale, a professor of politics at Queen Mary, University of London. “You know, they don’t want to see him hanging around like a bad smell in Downing Street.”

“About time, isn’t it? Seriously, I mean have you ever known anyone be so arrogant, ignorant, delusional?” Helen Dewdney, 53, who works in consumer rights, told AFP.

Get Latest World News along with Latest News from Indiaat Hindustan Times.
SHARE THIS ARTICLE ON
Topics
boris johnson
boris johnson
Subscribe to our best newsletters
Subscribed to newsletter successfully
Thank you for subscribing to our Daily News Capsule newsletter.