With cases soaring in all but eight of its 50 states, the US homeland security department announced that its land borders with Canada and Mexico will remain closed to all non-essential travel till November 21.

Countries are struggling to tackle the Covid-19 pandemic as global cases topped 40 million, with Wales ordering a two-week shutdown, Belgium warning of a virus tsunami, and Poland turning a national stadium into a field hospital.

With cases soaring in all but eight of its 50 states, the US homeland security department announced that its land borders with Canada and Mexico will remain closed to all non-essential travel till November 21.

Experts said that the new grim milestone in global cases is only the tip of the iceberg when it comes to the true impact of the pandemic that has upended life and work around the world. The actual worldwide tally is likely to be far higher as testing has been variable, many people have had no symptoms, and some governments have concealed the true number of cases. To date, over 1.1 million confirmed Covid-19 deaths have been reported. 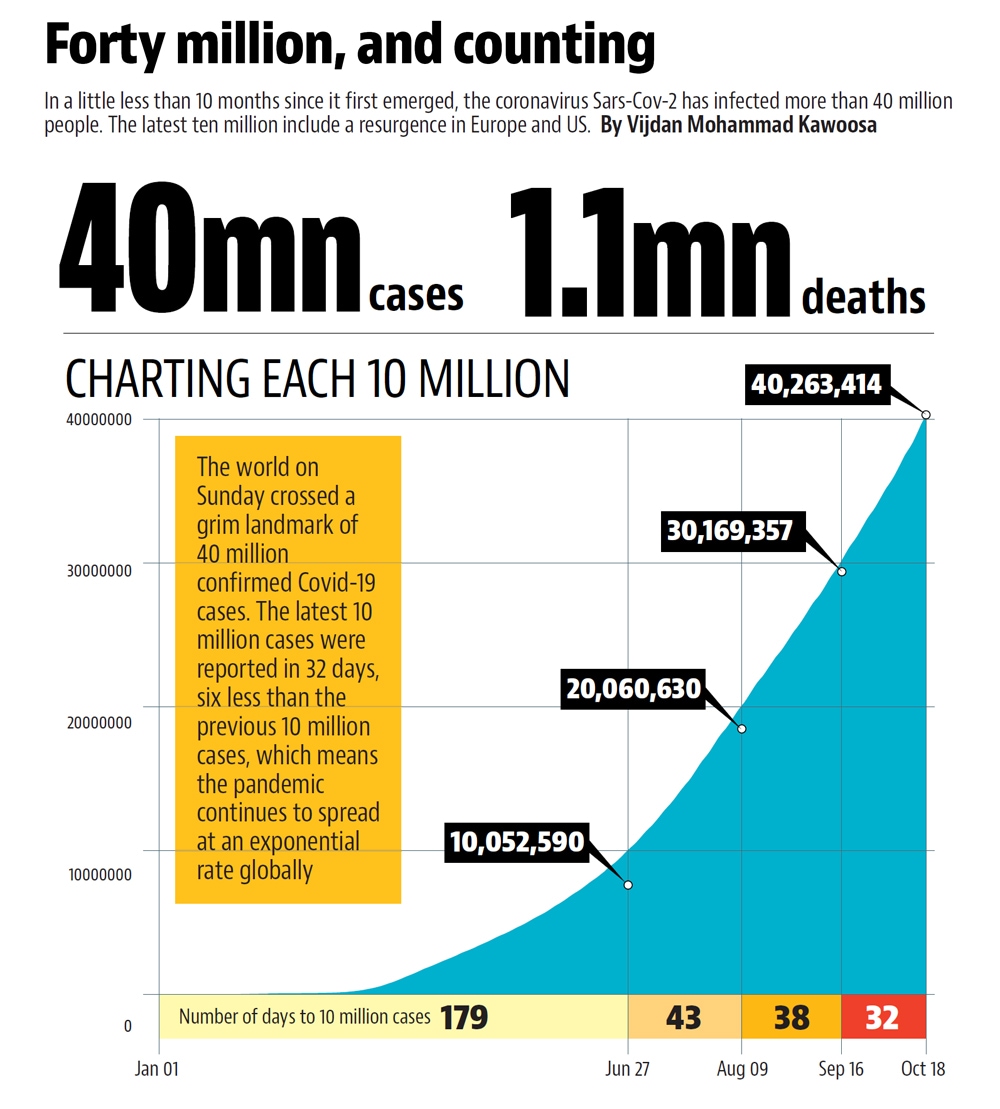 Wales announced a two-week “short, sharp” lockdown from Friday to break the cycle of transmission, as the number of new cases continued to surge in the United Kingdom.

Calling it a “firebreak”, first minister of the Labour-led Welsh government, Mark Drakeford, announced on Monday that for the two weeks, everyone will need to stay at home. All businesses will be shut.

Bars and restaurants across Belgium shut down for a month and a night-time curfew took effect on Monday as health authorities warned of a possible “tsunami” of new cases. “We are really very close to a tsunami,” Belgium’s health minister Frank Vandenbroucke said. Poland is opening a field hospital at Warsaw’s national stadium and will bring in the army to handle drive-through coronavirus testing facilities amid a surge in new infections that threatens to overwhelm the health care system.

Switzerland has made mask-wearing compulsory in indoor public spaces and put limits on public gatherings after infections doubled in a week.

South Africa’s health minister Zweli Mkhize and his wife have tested positive for Covid-19, as he warned of a possible resurgence of the disease in the country.

Palestinian chief negotiator Saeb Erekat, hospitalised in Israel with Covid-19, was placed on a ventilator on Monday after his condition deteriorated.

Russia reported almost 16,000 new cases on Monday, the highest single-day rise so far. For the fifth time in two weeks, Iran reported a record number of daily deaths linked to the virus, with 337 fatalities.

The UN said it would stockpile one billion syringes around the world by the end of 2021, to be used for the delivery of any future Covid-19 vaccine. Unicef said it aims to get 520 million syringes in its warehouses by the end of this year, to guarantee an initial supply in countries ahead of the vaccine

Farmers’ Protests Live Updates: No changes will be made to MSP, assures Tomar