Slowdown in growth has increased gap between North and South: The slowdown in growth in the non-OECD world has adversely affected their ability to catch up with the developed world in terms of per capita incomes.
Share Via
Copy Link
Hindustan Times, New Delhi | ByVineet Sachdev and Roshan Kishore

On 15 September 2008, Lehman Brothers filed for bankruptcy in the US. Lehman was brought down by its overexposure to financial products based on sub-prime (poor quality) housing mortgages. Its crash is seen as the event that set off the financial crisis in the US, leading to the worst global economic slowdown since the great depression of the 1930s. Eleven years after Lehman went down, what is the state of the global economy? The short answer: It’s not 2008 but the crisis is still not over.

Global growth has not recovered: The global economy was growing rapidly before 2008. Compound annual growth rate (CAGR) of world GDP between 1997 and 2007 was 3.4%. This has come down to 2.5% in the period between 2008 and 2018. While the financial crisis started in the developed world, it is the rest of the world that has suffered more in the post-crisis era. This can be seen from the bigger reversal of GDP growth trajectory — in BRICS (Brazil, Russia, India, China and South Africa) and rest of the world. The Organisation for Economic Cooperation and Development (OECD) countries, which includes developed economies, were not growing at a very high pace even before the crisis. 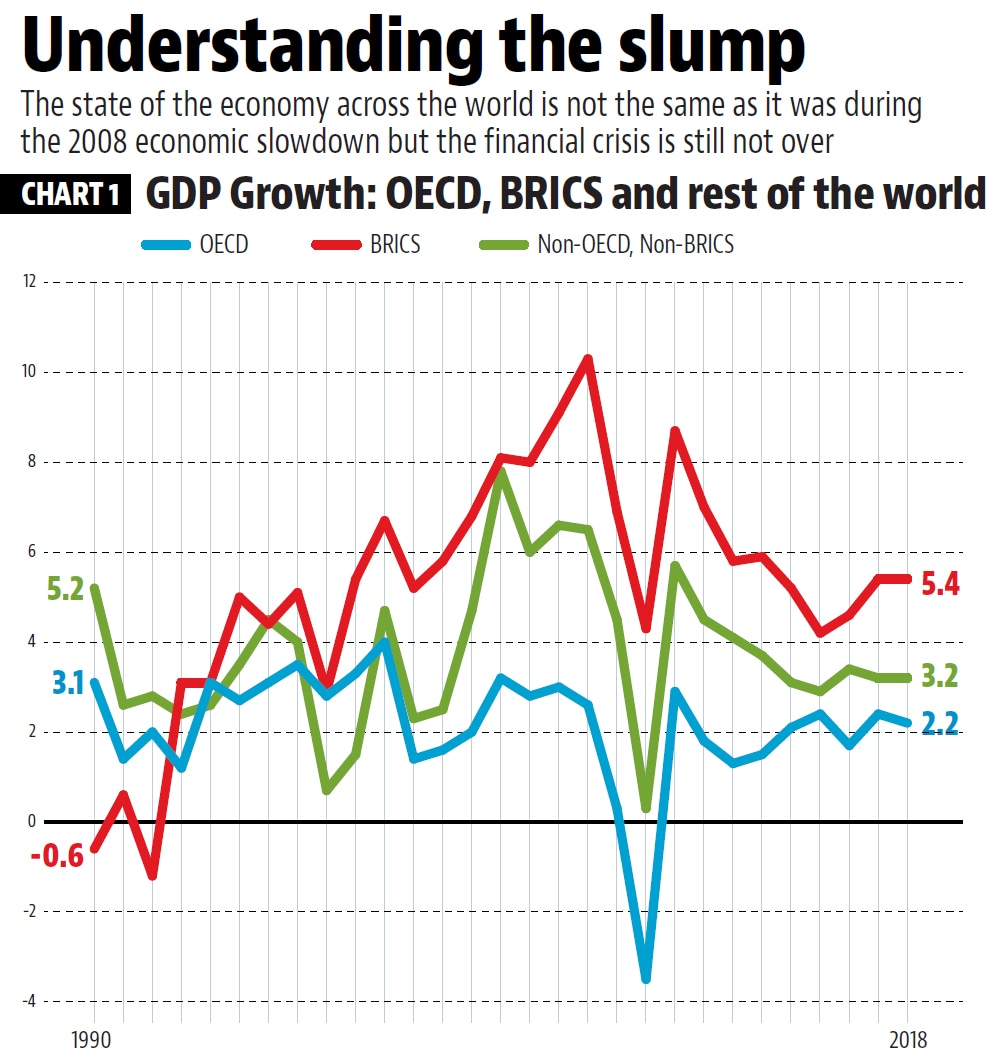 Slowdown in growth has increased gap between North and South: The slowdown in growth in the non-OECD world has adversely affected their ability to catch up with the developed world in terms of per capita incomes. While countries such as India and China are seen as high-growth success stories, they are still far behind OECD levels in terms of per capita incomes. Had the 2008 crisis not slowed down growth, the gap would probably be smaller today. Trade as an engine of growth has come under strain: Between the great recession of the 1930s and the 2008 crisis, exports were an important driver of growth for non-developed countries.

From Japan to the Asian Tigers to China, various countries and groups leveraged western markets to improve their economic fortunes at different points in time. This seems to have come under strain after the 2008 crisis.

With the global economy getting mired in trade wars, and protectionism becoming a big driver of domestic politics in developed countries, it is unlikely that non-OECD exporters will get better access to developed world markets in the near future.

This is a structural blow to growth prospects in the non-developed world. The 2008 crisis has also proved to be a watershed event as far as share of total merchandise trade in world GDP is concerned. In percentage terms this value had been increasing consistently since the 1960s. It suffered the biggest fall in 2008 and has not been able to regain its old trajectory after that.

With the multilateral trade system caught in an impasse – the World Trade Organisation has not been able to arrive at agreements in last two ministerial conferences – the future does not look very promising. Financial crisis also created an agrarian crisis: Global agricultural prices fell in the immediate aftermath of the 2008 crisis. However, this was followed by a commodity price shock which lasted until 2011. Since then, agricultural prices have been declining. This has put a squeeze on farm incomes across the world.

Farmers in third world countries have been especially affected, as they do not enjoy the protective cover of subsidies and income support available to the farmers in developed countries. The negative shock to agricultural prices has also played a role in intensifying rural distress in countries such as India. Stock markets have done better than the real economy: Stock markets suffered heavily across the world in the immediate aftermath of the global crisis. However, some of the important indices started recovering by 2011. In the US, NASDAQ and Dow Jones have made substantial gains since.

However the recovery was much slower in Japan and markets seem to have stagnated in Britain and Singapore. Among emerging market indices, India’s BSE has done really well, while markets have been relatively tepid in China. Income inequality has not improved despite political turmoil: While the pre-crisis phase was a high-growth period in the world, it was also accompanied by rising inequalities in both advanced and developing countries.

This is despite the fact that unemployment rates have come down significantly in the US in this decade. Inability to bring about fundamental changes in the economic structure despite some short term improvement in employment opportunities is likely keep political pressure high on politicians in developed countries. One such example is the continuing attack on the US Federal Reserve and flip-flops on trade negotiations with China by US President Donald Trump.

Such political volatility is bound to increase policy uncertainty and erode the possibility of a coordinated action when the next Lehman moment, which was a tipping point for the global economy, arrives.