Farhan Akhtar pens romantic post for Shibani Dandekar, calls her ‘a gift from the universe’

Actor-director Farhan Akhtar hasn’t announced his relationship with singer Shibani Dandekar, but that doesn’t stop him from acknowledging it. He took to Instagram recently to write an emotional post for his girlfriend. “I don’t know if you find love or love finds you,” he wrote, “Either way, it’s a gift from the universe.”

The picture, shared on his Instagram stories, shows him posing with Shibani. The couple made it Instagram official last year by posting pictures of each other on their respective accounts. 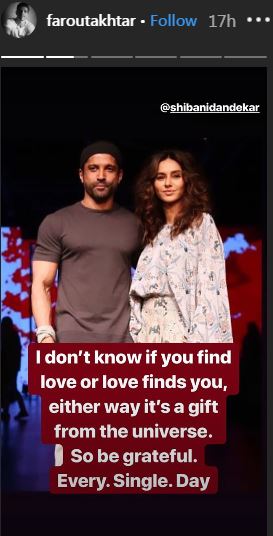 Farhan has often shared pictures of and with Shibani. He recently posted a picture of the two of them frolicking in a pool. He captioned it, “As long as I have you, As long as you are, I’ll never be lost, Shine on beautiful star @shibanidandekar love you loads.”

In an interview to Mid-Day, Shibani spoke about her relationship. “I am not secretive, but I don’t feel the need to say things out loud.”

Farhan had been married to celebrity hairstylist Adhuna Bhabani for 16 years and has two daughters with her. They divorced in 2016. In a joint statement, they said, “This is to announce that we, Adhuna and Farhan, have mutually and amicably decided to separate. Our children remain our priority and it is immensely important to us, as responsible parents, that they be protected from unwarranted speculation and public glare. We sincerely request that we are given the privacy that is required at this time to move forward in a dignified manner.”

Farhan will next be seen with Priyanka Chopra and Zaira Wasim in director Shonali Bose’s tentatively titled The Sky is Pink. Recent reports also suggest that a third entry in the Don franchise is being planned for Shah Rukh Khan to star in. It is unclear if Farhan, the director of the first two films, will return to helm. He recently produced the Amazon Prime Video series, Mirzapur, and is producing Gully Boy, directed by sister Zoya.