The company is tying up funds to make the purchase in a month.
Share Via
Copy Link
Livemint | By Deborshi Chaki, Mumbai

RIL is expected to make the offer within a month and has begun shortlisting lenders to fund the transaction, the people cited above said on the condition of anonymity as the discussions are private. Several top foreign banks are forming a syndicate for financing the acquisition, they said.

“RIL has been evaluating the deal for over three months now, and the discussions have progressed substantially since then,” said one of the two people. “Akash Ambani, who leads Reliance Jio, is personally managing the transaction.” 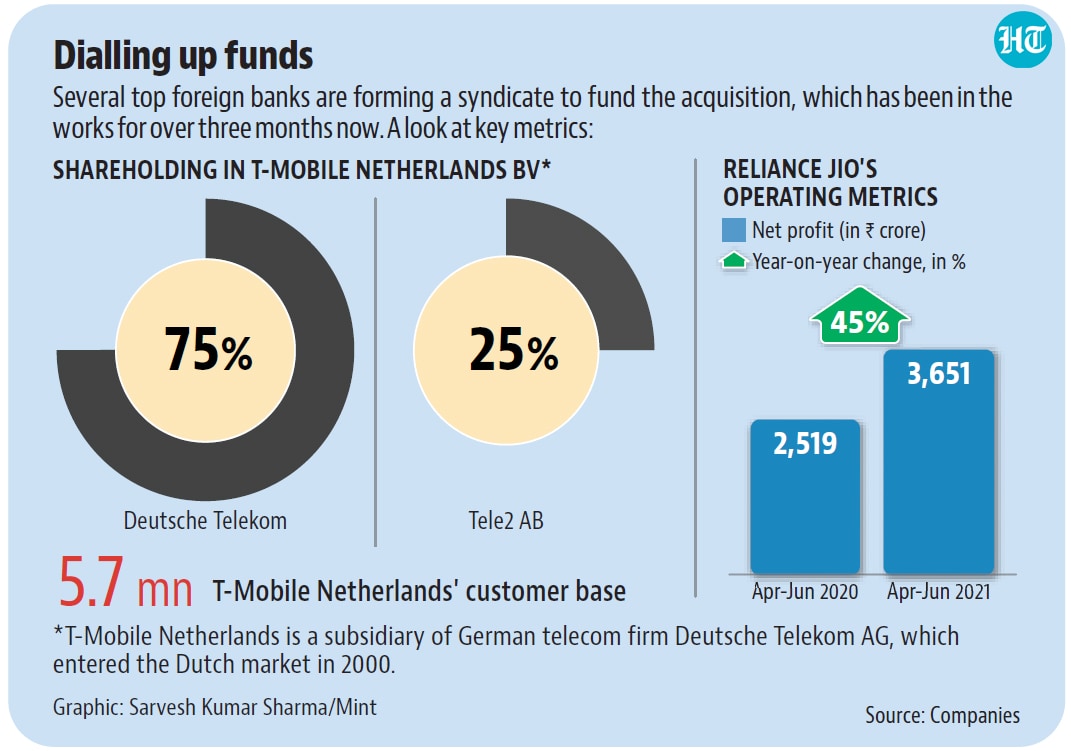 Mukesh Ambani, Asia’s richest man, is trying to build a global technology company that will rival Google and Amazon.com Inc., diversifying from an oil and refining business.

“The T-Mobile acquisition will give Jio a foothold in the European telecom market and help it de-risk the business by diversifying into other markets,’’ said the second person.

Bloomberg first reported the transaction on August 10. The Bloomberg report said RIL is working with an adviser to evaluate an offer for T-Mobile Netherlands, and Deutsche Telekom is seeking about €5 billion ($5.9 billion) for its stake.

It considered a sale of the unit in 2015 to raise funds to buy wireless frequencies in the US before deciding to keep the business. In 2019, T-Mobile Netherlands merged with Tele2 AB’s operations in the country to create one of the biggest local carriers.

T-Mobile Netherlands is 75% owned by Deutsche Telekom, with Tele2 owning the rest. It has 5.7 million customers.

T-Mobile also has a significant presence in the UK. In 2010, it merged with Orange UK to form a joint venture, Everything Everywhere, in 2010, which operated the T-Mobile and Orange brands until March 2015.

Through a separate subsidiary, Deutsche Telekom owns a substantial stake in T-Mobile US, the second-largest wireless carrier in the country, with 104.8 million subscribers.

Reliance Industries has identified the digital services business as its principal growth driver alongside retail. In fiscal 2021, the company sold a 33.52% stake in Jio Platforms to a clutch of financial and strategic investors for ₹1.52 lakh crore. They include Google, Facebook, Intel and Qualcomm and top global private equity funds such as TPG and General Atlantic.

Reliance Jio said net profit rose 45% to ₹3,651 crore in the first quarter of the current fiscal from ₹2,519 crore in the year earlier.