Reliance Industries Ltd (RIL) pledged to invest ₹75,000 crore in clean energy, becoming the latest oil company to announce a mega push into renewables as the environmental impact of fossil fuels comes under increasing scrutiny from investors and regulators. 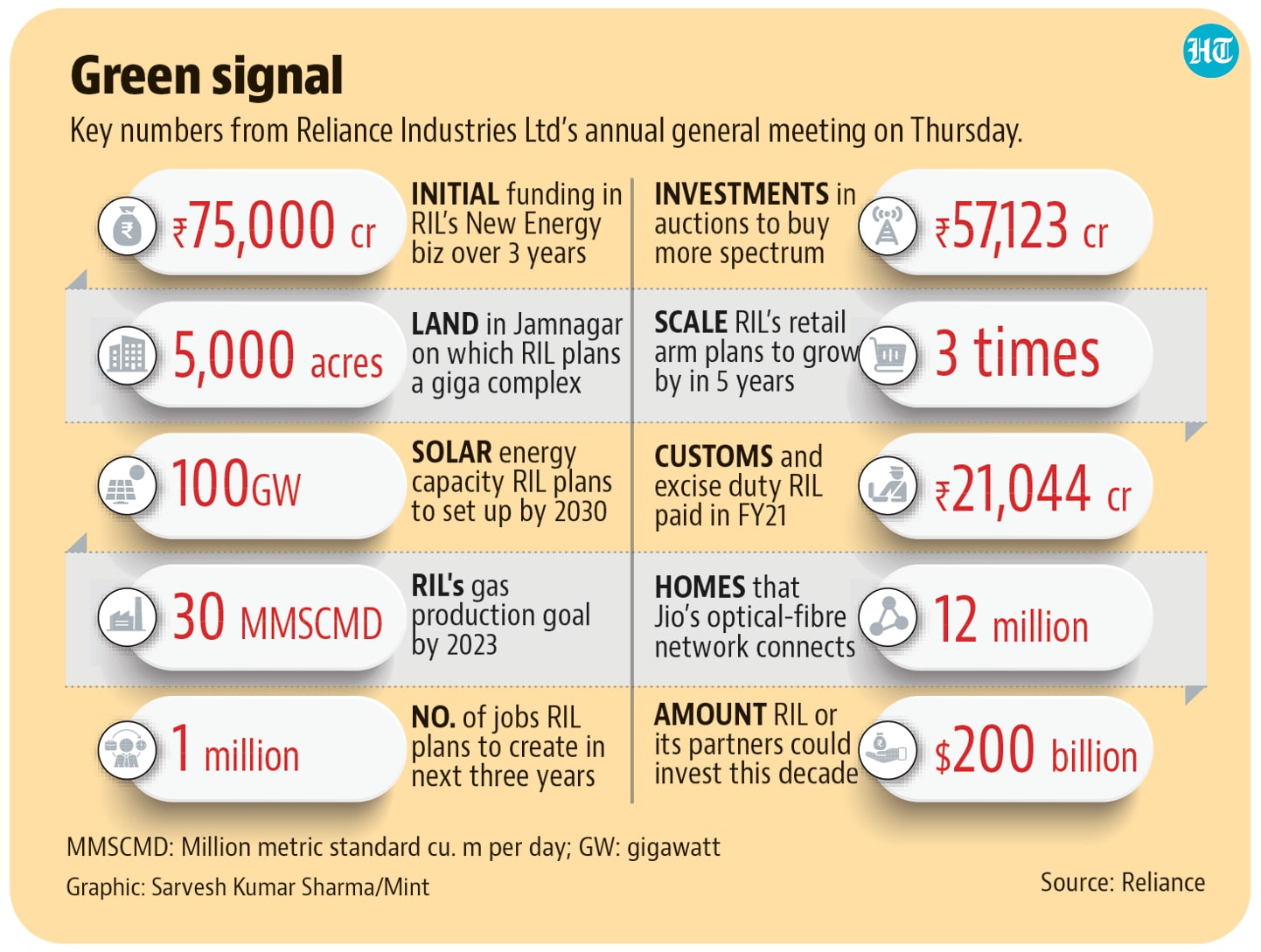 The company will spend the remaining ₹15,000 crore in developing a value chain, partnerships, and futuristic technologies, Ambani told shareholders at the company’s annual meeting on Thursday.

Oil companies, including Royal Dutch Shell, Chevron Corp., and Exxon Mobil Corp., are under pressure from shareholders and governments to slash their carbon footprint and transition to an environmentally sustainable model.

Plunging renewable energy tariffs and aggressive government and corporate targets to decarbonise are prompting investors to turn up the pressure on these companies to prepare for a post-fossil fuel world. At the previous year’s annual meeting, Ambani, Asia’s richest man, pledged to make Reliance Industries net carbon zero by 2035.

“We will transform our legacy business into sustainable, circular, and net-zero carbon materials business—one that will provide growing returns over several decades,” he said. As part of the firm’s latest investment plan, Reliance Industries will build an integrated solar photovoltaic module factory to establish and enable at least 100GW solar energy by 2030.

A significant part of this will come from rooftop solar and decentralized solar installations in villages. This would be supplemented by an advanced energy storage giga factory, an electrolyzer giga factory to manufacture modular electrolyzers used for captive production of green hydrogen for domestic use, as well as for global sale.

Reliance Industries’ fourth initiative will be the fuel cell giga factory. A fuel cell uses oxygen from the air and hydrogen to generate electricity. The only emission of this process is non-polluting water vapour.

Simultaneously, to derisk the company’s reliance on conventional oil refining business, Reliance Industries will conclude a long-pending deal to sell a 20% stake in its oil-to-chemicals (O2C) business to Saudi Aramco at about $15 billion by the end of 2021. In addition, Ambani told shareholders that Yasir Al-Rumayyan, chairman of Saudi Aramco and the governor of Public Investment Fund (PIF), will join the RIL board as an independent director. PIF has invested a combined $2.8 billion in Reliance Industries’ retail and digital assets units.

“As an important part of this vision of achieving accelerated growth, we look forward to welcoming Saudi Aramco as a strategic partner in our O2C business,” Ambani said.

Last fiscal, RIL carved out its O2C business into a separate entity to facilitate investments into the unit from companies such as Aramco. Ir comprises refining, chemicals, fuel retail and aviation fuel, and wholesale marketing businesses. O2C’s aim, RIL said, is to maximize crude to chemicals conversion while creating a sustainable growth business.