A detailed plan to build a 3km Metro loop corridor that will connect government offices being built along Rajpath as part of the Central Vista redevelopment project will be finalised by the end of this month, Delhi Metro Rail Corporation (DMRC) officials aware of the project said on Tuesday.

Besides preparing the detailed project report (DPR), the Metro rail body will appoint a design consultant for the station interiors.

“Work is in progress for preparation of DPR for the project and this is expected to be completed within this month,” said Anuj Dayal, principal executive director, corporate communications, DMRC.

“At the same time, a tender has been floated for the appointment of a detailed design consultant for the project,” Dayal said.

The loop corridor will begin and end at the Central Secretariat Metro station and have four stations. Timelines for the project have not been finalised yet, officials said.

Unlike the typical Metro stations, exits from the four stations are likely to provide direct access to the office buildings by using escalators, staircases and walkways. 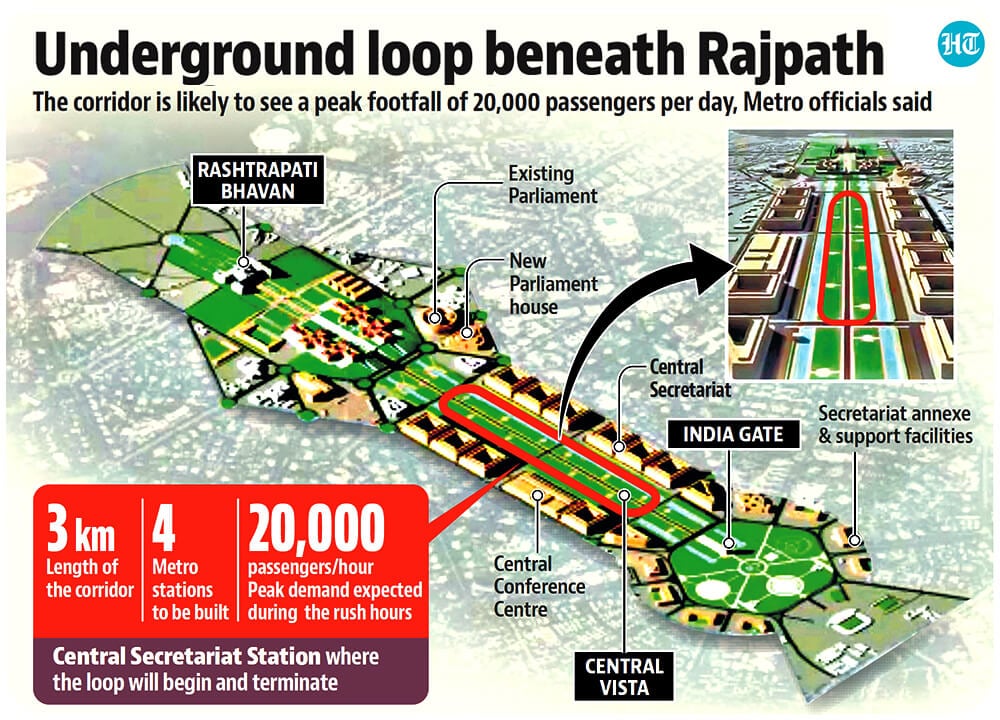 Metro officials said the design consultant’s work will be guided by the specifications of the DPR, which includes the dimensions of the Metro stations, their depth, the number of coaches to be deployed and the theme for the interior design.

According to the initial plans, the number of coaches deployed will not be 6 or 8, as used on DMRC’s normal corridors, with a smaller coach train of around 3-4 coaches likely to be utilised.

The trains are also likely to be smaller in size, allowing for swift movement and sharper turns, officials aware of the matter said.

DMRC said the names of the four stations on the loop corridor were yet to be finalised at, a process that will commence once the project report is complete.

Work on the corridor will proceed simultaneously with the Central Vista project, officials said.

The names of the four stations are yet to be finalised. The corridor is likely to see a peak footfall of 20,000 passengers per day.

The Central Secretariat metro station is an interchange station that connects the Yellow and Violet lines.

The new extended section will be built underground and parallel to Rajpath.

The redeveloped Central Vista Avenue is likely to be opened to the public this month, nearly 17 months after it was closed, a senior Central Public Works Department (CPWD) official earlier said.

The redeveloped 3km-long stretch from Vijay Chowk to India Gate was to be completed in December last year, but construction was delayed.

While Rajpath and the lawns were ready before Republic Day this year, the construction work of amenity blocks and the underpasses is almost complete.

SHARE THIS ARTICLE ON
Topics
central vista
central vista
Subscribe to our best newsletters
Subscribed to newsletter successfully
Thank you for subscribing to our Daily News Capsule newsletter.
Close Story
QUICKREADS
VIEW ALL