At least 244 bird species were recorded from Delhi and the National Capital Region on the Big Bird Day 2021 held on February 21, the result of which was released on Thursday.

Big Bird Day is an annual event, organised at the onset of spring when birders observe and record different species. The event started in 2004.

This year, the Grey-headed fish eagle was spotted at the Okhla Bird Sanctuary, making it the fourth sighting ever of this bird in NCR. According to the report, some other interesting sightings from NCR included Grey-winged blackbird, Tickell’s thrush, Great crested grebe, Greater White-fronted Goose and Spotted crake among others.

Speaking on the marginal decrease in the number of bird species recorded this year, Nikhil Devasar, founder of Delhi Bird Foundation which organised the Big Bird Day, said, “One of the reasons for the low count this year could be because we are still in a pandemic and lesser number of people were able to come out this year to record birds.” 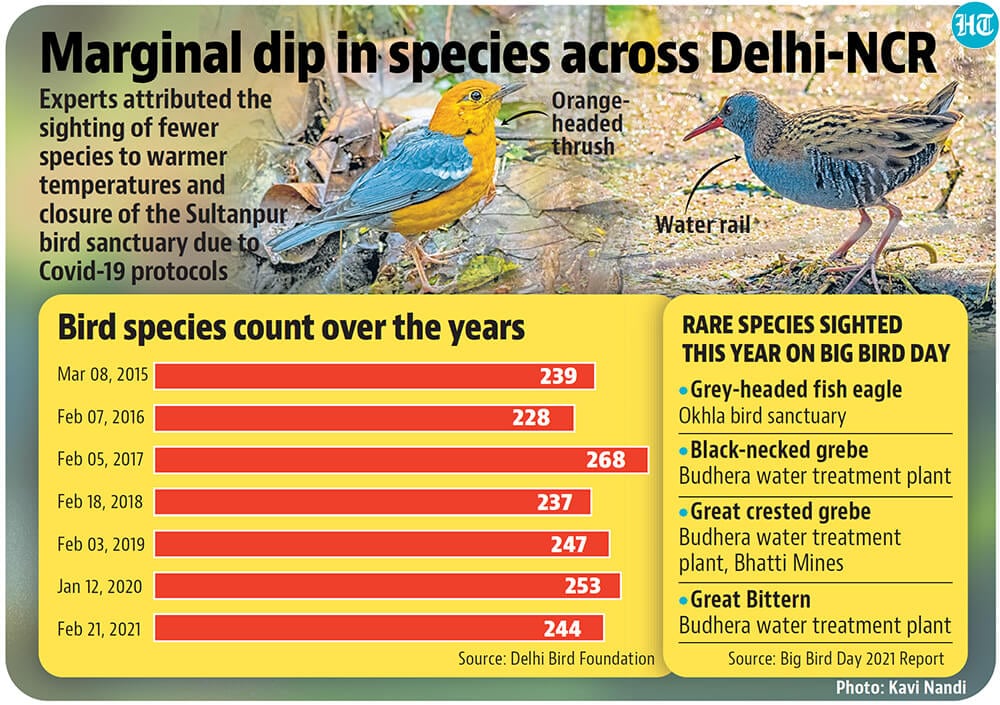 He added that unusually high temperatures during the past few days may also have caused the lower species count this year.

On Wednesday, Delhi recorded a maximum temperature of 32.5 degrees Celsius -- the warmest day in February in the past 15 years. On Thursday, it was 33 degrees with meteorological scientists predicting further increase on Friday.

Pankaj Gupta, a birder from Delhi Bird Group said, “We recorded fewer species of birds this year, but the number of birds was not less as compared to previous years. The dip in the number of species could be due to various reasons such as lack of water near Sultanpur and Nafajgarh, prime areas for bird sighting. This year, the Sultanpur Bird Sanctuary was also closed on the day of the count due to Covid-19 protocols, so we could not go there.”