In a blow to the Bharatiya Janata Party, the Opposition parties emerged victorious in 11 of 14 Lok Sabha and Assembly bypolls.

The results of the Kairana and Palghar Lok Sabha seats summarise the biggest takeaway from this round of bypolls. 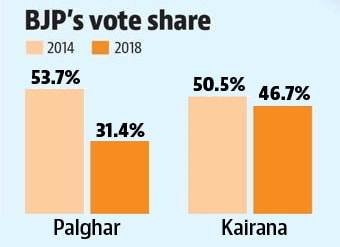 What is interesting is that the BJP’s vote share has fallen by more than 22 percentage points from the 2014 figure in Palaghar, while it has gone down by just 4 percentage points in Kairana. The difference in the degree of opposition unity explains the mismatch between vote share and victory/defeat for the BJP in these two seats. Had the opposition been united, it would have got an even bigger victory than Kairana in Palghar.

The writing on the wall is clear: a united opposition can inflict significant damage to the BJP’s 2014 seat tally in the next general elections.