The government said any interference by a court in the marital statute based on personal laws will create “havoc” in society and will run afoul of the intent of Parliament in framing the laws.

The Centre told the Delhi high court on Thursday that a marriage in India can be recognised only if it is between a “biological man” and a “biological woman” capable of producing children, strongly opposing the validation of same-sex marital unions.

The government said any interference by a court in the marital statute based on personal laws will create “havoc” in society and will run afoul of the intent of Parliament in framing the laws. It said a fundamental right cannot be an “untrammelled right” and can’t override other constitutional principles.

In an affidavit filed before a bench comprising justices Rajiv Sahai Endlaw and Amit Bansal, the government opposed pleas seeking legalisation of same-sex marriages and said the laws mandate that “marriage is a bond between a biological man and a biological woman”.

The institution of marriage has a sanctity attached to it and in major parts of the country it is regarded as a “sacrament”, the government argued. It said that in India, despite statutory recognition of the relationship of marriage between a biological man and a biological woman, marriage depends on age-old customs, rituals, practices, cultural ethos and societal values.

In a plea filed before the court, Abhijit Iyer Mitra, Gopi Shankar, Giti Thadani and G Oorvasi noted that a marriage between people of the same gender wasn’t still possible despite the Supreme Court decriminalising consensual homosexual acts in 2018 and sought a declaration recognising such unions under the Hindu Marriage Act (HMA).

Through counsel Raghav Awasthi, the petition contended that the HMA does not distinguish between heterosexual and homosexual marriages if one were to go by how it is worded. The act very clearly states that marriage can be solemnised between “any two Hindus,” the petition argued. 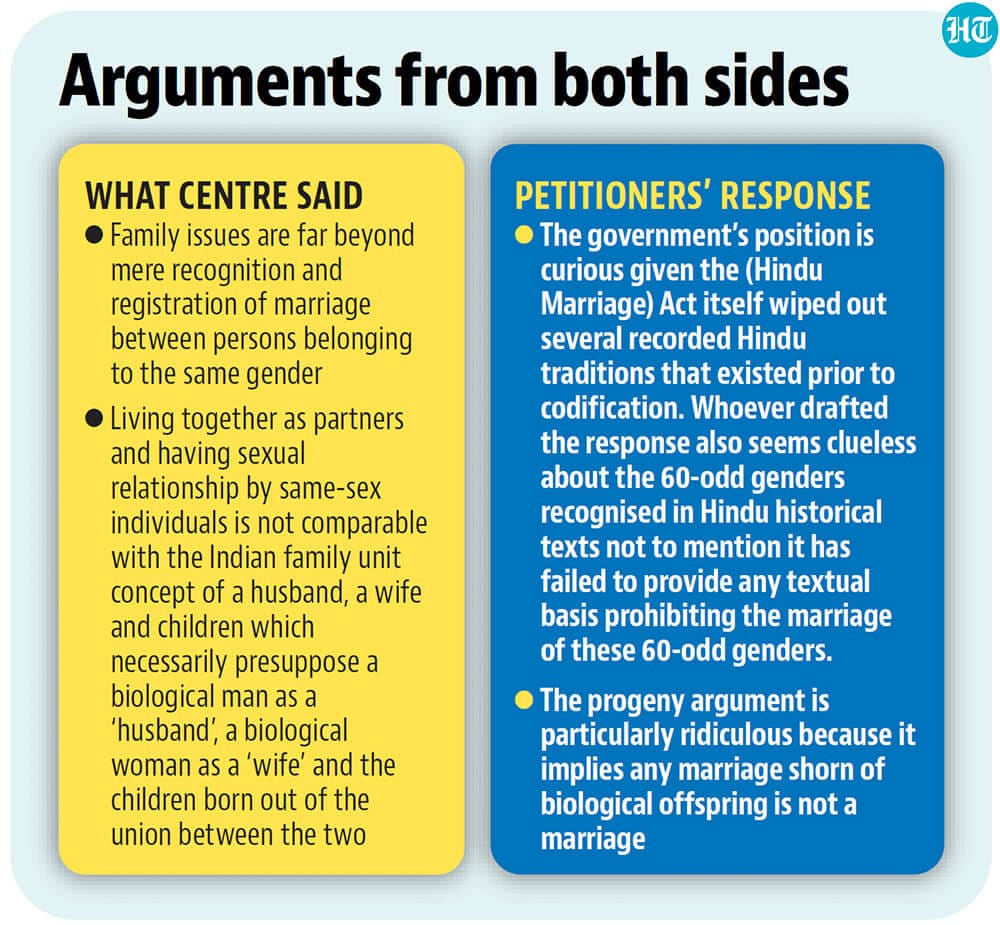 The third plea was filed by two men — Vaibhav Jain, an Indian citizen, and Parag Vijay Mehta, an overseas citizen of India — who got married in the United States, where same-sex marriage is legal, in 2017. They also sought the same relief as Arora and Khanna, stating that an Indian consulate had refused to register their union this year under the FMA.

The government said Western ideas cannot be imported to the Indian context, citing the Indian constitutional law and jurisprudence. It said that seeking the registration of such marriages has more ramifications than simple legal recognition, including family issues and “public significance”.

“Family issues are far beyond mere recognition and registration of marriage between persons belonging to the same gender. Living together as partners and having sexual relationship by same-sex individuals {which is decriminalised now] is not comparable with the Indian family unit concept of a husband, a wife and children which necessarily presuppose a biological man as a ‘husband’, a biological woman as a ‘wife’ and the children born out of the union between the two,” the Centre told the high court.

Expressing disappointment, Mitra said: “The government’s position is curious given the Act itself wiped out several recorded Hindu traditions that existed prior to codification. Whoever drafted the response also seems clueless about the 60-odd genders recognised in Hindu historical texts not to mention it has failed to provide any textual basis prohibiting the marriage of these 60-odd genders.”

“The progeny argument is particularly ridiculous because it implies any marriage shorn of biological offspring is not a marriage. In short this is a shoddy and poorly drafted response,” he added.

In its affidavit, the Centre said the “celebration of a marriage gives rise to not just legal but moral and social obligations, particularly the reciprocal duty of support placed upon spouses and their joint responsibility for supporting and raising children born of the marriage and to ensure their proper mental and psychological growth in the most natural way possible”.

“Relationship in marriage has more than personal significance at least in part because human beings are social beings whose humanity is expressed through their relationships with other. Entering into marriage therefore is to enter into a relationship that has public significance as well.”

“The institution of marriage and family are important social institutions that provide for the security, support and companionship of members of our society and bear an important role in the rearing of child and their mental and psychological upbringing,” the affidavit read.

It said the concept of marriage cannot be relegated to merely a concept within the domain of privacy of an individual. The government said that considering the larger statutory framework, it is clear that “there exists a legitimate state interest in limiting the legal recognition of marriage to persons of opposite sexes only”.

“In same sex marriage, it is neither possible nor feasible to term one a husband and the other one a wife... Resultantly the statutory scheme of many statutory enactments will become otiose,” it asserted.

Advocate Raghav Awasthi, who represented one of the petitioners, said: “With utmost respect, one is unable to bring oneself to agree with the point of view that has been put forth in the counter affidavit. Not only does the Hindu Marriage Act per se does not mention biological ‘sex’ or ‘gender’, Hindu religious texts are also rife with references to non-binary individuals and their conjugal rights.

“That marriage and/or sexual companionship must exist between heterosexual persons is an Abrahamic conception and has little to do with Hinduism. If our religion is to survive and thrive in the 21st century, we must not reduce ourselves to a pale imitation of the Abrahamic religious traditions and should reclaim our ancient tradition of tolerance as well as celebration of sexual diversity,” he said.

On Thursday, the court allowed the Delhi government to be impleaded as a party to the case and posted the matter for further hearing on April 20.

Get Latest India Newsalong with Latest Newsand Top Headlinesfrom India and around the world.
SHARE THIS ARTICLE ON
Topics
delhi high court
delhi high court
Subscribe to our best newsletters
Subscribed to newsletter successfully
Thank you for subscribing to our Daily News Capsule newsletter.