Despite the popular notion that an increase in voter turnout is bad news for serving governments, three decades of electoral data shows voter turnout is not necessarily pro- or anti-incumbent; the relationship between these two variables is likely shaped by the specific context at hand in elections

With voters in the southern state of Karnataka headed to the polls on May 12, Indians will soon be hit with a barrage of analyses suggesting that the extent of voter turnout in the assembly polls will give us a clear indication of whether the incumbent Congress or the opposition Bharatiya Janata Party (BJP) will emerge victorious on May 15, when the votes are finally counted.

Over the years, a widely-held belief has taken root among India’s election analysts that an increase in voter turnout is inherently bad news for incumbents. While the origins of this received wisdom are unclear, it is repeated ad nauseam nearly every election cycle. Proponents of this view argue that an increase in voter turnout in the current election relative to the previous election signals that an angry electorate is in the mood for change. Rising turnout is, therefore, an early indicator of trouble for the incumbent. For instance, when discussing the stark growth in voter turnout during India’s 2014 general election relative to the previous election in 2009, economist Surjit Bhalla claimed that “such a phenomena [sic] always goes against the incumbent. It is, if you will, bad news for the incumbent.” Similarly, after the 2016 state elections in Tamil Nadu, one election analyst proclaimed, “It is true that a huge voter turnout actually indicates an anti-incumbency wave. People turn up in huge numbers to vote out the government.”

Opinion | 2019 general election will be no cakewalk for Narendra Modi, BJP

Not everyone believes that this received wisdom reflects facts on the ground. To the contrary, many election experts claim that the purported relationship between anti-incumbency and turnout is non-existent. Psephologist Sanjay Kumar once remarked: “I don’t know how this idea that high turnout is associated with anti-incumbency has persisted from generation to generation. The relationship has never existed.” In fact, some have even argued in favour of the opposite—that is, that a spike in voter turnout is “pro-incumbent.” In 2012, the then-chief minister of Gujarat, Narendra Modi, attributed an increase in state voter turnout to a surge of support in favour of his incumbent BJP government. “This is the record polling after the formation of the state. We have a popular term in anti-incumbency but after this state election, political pundits will have to adapt and discuss the term pro-incumbency,” Modi said.

Recent electoral history presents a mixed picture; one can find examples linking a sharp rise in voter turnout to both incumbent defeats and victories. Consider two elections: the 2010 assembly elections in Bihar and the 2011 assembly polls in Tamil Nadu. In Bihar’s case, voter turnout grew by 6.8 percentage points between 2005 and 2010 as part of an underlying trend toward rising voter participation. Notwithstanding this increase in voter mobilisation, the incumbent National Democratic Alliance (NDA) coalition, headed by sitting chief minister Nitish Kumar of the Janata Dal (United), won a rousing re-election: the coalition grew its vote share by 3% and increased its share of seats in the Bihar assembly by nearly 26%.

Contrast this with Tamil Nadu’s 2011 polls, which saw a 7.2 percentage point increase in voter turnout over 2006. In this case, rising voter turnout coincided with an incumbent loss. In the 2011 election, the ruling Dravida Munnetra Kazhagam (DMK) alliance suffered a sharp defeat at the hands of its arch-rival All India Anna Dravida Munnetra Kazhagam (AIADMK), losing 3% of its vote share and more than 43% of its seat share. In the prior 2006 polls, which also saw a large increase in turnout, the incumbent AIADMK suffered a similar fate.

So who is right and who is wrong? In a recent article published in Studies in Indian Politics, we attempted to settle this debate. To do so, we scrutinised the link between turnout and electoral outcomes by examining 128 elections held across 18 major states of India that account for 93% of the population between 1980 and 2012.

Rather than focus on any one measure of incumbency in isolation, we looked at three different metrics: whether the incumbent was re-elected, the change in its seat share, and the change in its vote share. Re-election is a blunt measure of incumbent performance because it does not fully account for the vagaries of India’s first-past-the-post electoral rules, in which small changes in vote shares can have a dramatic impact on the number of seats won. Changes in votes and seats provide more granular assessments of the electorate’s preferences, since it is often the case that incumbents may win re-election despite losing votes, seats, or both.

Out of 128 total elections we examined, determining incumbency (due to messy political breakdowns) was impossible in five cases. Of the 123 remaining elections, incumbents were victorious in 36.6% of cases, seemingly confirming the longstanding proposition that incumbents are rather unusually disadvantaged in India—a situation that stands in stark contrast to many other longstanding democracies such as the United States. Indeed, the average change in an incumbent’s vote share (in our data) is a decrease of 7.3%, while their average change in seat share is a decline of 24.5 %. However, there is an interesting variation over time: while incumbents emerged victorious in 44.7 % of elections held in the 1980s, this number plummeted to just 21.1% in the 1990s, a period of significant political tumult and fragmentation in India. The incumbent re-election rate rebounded in the 2000s to 42.6%, slightly below where it stood in the 1980s.

The average change in turnout from one election to the next is 1 percentage point, but there is marked variation across states and over time. We had to set aside six state elections in which turnout rose or dropped by 20 percentage points or more from these previous election as outliers; all of these were in states with a checkered history of insurgency or wide-scale violence.

FIGURE 1
Relative Voter Turnout and Incumbent Performance
These plots represent the relationship between the change in turnout from the previous election (x-axis) and three measures of incumbent performance (y-axis). The latter is measured in terms of a binary indicator of re-election, the change in vote share, and the change in seat share, respectively. These plots do not include six outlier observations. 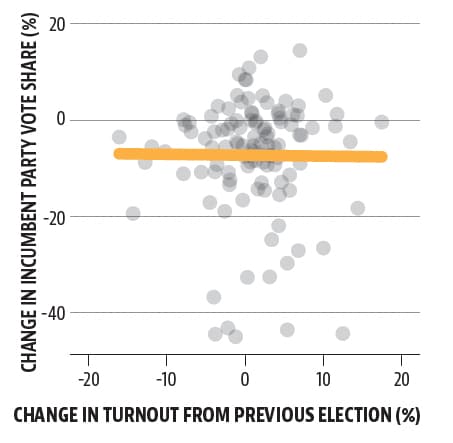 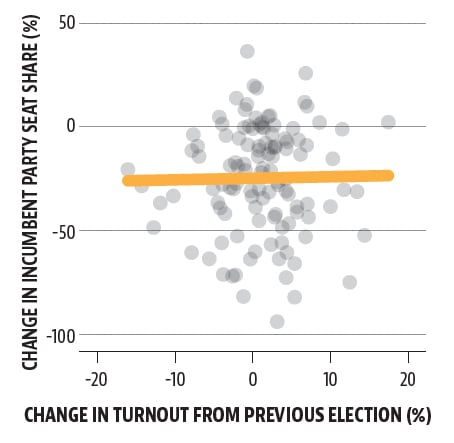 Source: Authors’ analyses based on Election Commission of India (ECI) data compiled by Vaishnav and Swanson (2015)

Another way of looking at this relationship is to create categories (or quintiles) of relative turnout—with the first category representing those cases where turnout change was smallest (or negative) and the last category representing where the change in turnout was the greatest. If higher turnout is really bad for incumbents, we should see a clear trend as we move from one end of the spectrum to the other. The data reveal an interesting pattern: extreme turnout changes (both positive and negative) appear to be bad for incumbents; the middle of the turnout distribution is the safest place for incumbents to find themselves. There is evidently no simple, linear relationship between the two.

More sophisticated regression analyses — those that account for other political factors like the invocation of President’s Rule, the partisan identity of the ruling party, or the incumbent’s coalition status — also fail to turn up a straightforward pattern between the change in turnout and how well an incumbent performs.

What our analyses do reveal is that, despite the popularity of the notion that citizens come out to the polls in greater numbers when they are motivated to punish the incumbent government, three decades of electoral data present a more ambiguous picture. Voter turnout, the data suggest, is not necessarily pro- or anti-incumbent; rather, the relationship between these two variables is likely shaped by the specific context at hand. Similar analyses using national election data conducted by other researchers tell a comparable story: changes in voter turnout are not highly informative of future electoral outcomes.

So why does this popular trope get repeated election after election? For starters, there are several cases where higher turnout does coincide with poor incumbent performance. Nearly every election expert can point to this or that anecdote to prove the point. Second, focusing on changes in turnout feeds pre-election chatter and punditry during the seemingly interminable period between the time votes are cast and counted. Third and finally, the idea that higher turnout reflects voter disenchantment intuitively “feels” right: after all, why would voters who previously stayed home show up, other than vote a particularly bad incumbent out? Unfortunately, hard election data leaves these explanations wanting.

Milan Vaishnav (@MilanV) is senior fellow and director of the South Asia program at the Carnegie Endowment for International Peace. Johnathan Guy (@johnathanjguy) is a graduate of the University of Chicago. This article is part of the “India Elects 2019” series, a collaboration between Carnegie and the Hindustan Times, and draws on a recent study by the authors (http://ceip.org/2KctU0v)