Opinion: 2019 general election will be no cakewalk for Narendra Modi, BJP

When it comes to elections, BJP’s Narendra Modi is still a clear favourite. However he isn’t as invulnerable as he was in 2014. The saffron party has four crucial stumbling blocks that will determine its fate in 2019 and how it moves forward.

In about 12 months, Indian voters will go to the polls to elect their next Parliament. While elections in India are notoriously difficult to predict, one need not go out on a limb to declare that the ruling Bharatiya Janata Party (BJP) of Prime Minister Narendra Modi would be the clear favourite if the elections were to be held today. Following the BJP’s decisive 2014 mandate, many analysts confidently proclaimed that Modi would remain in power for at least two terms. Opinion polls reveal that Modi remains highly popular after four years in office, and the BJP has managed to methodically expand its footprint in the numerous state elections since 2014. The BJP and its allies now run 21 of 29 states; prior to Modi’s election, the BJP-led National Democratic Alliance (NDA) controlled just eight. The Opposition has struggled to counter the BJP onslaught.

Yet the election’s clear front-runner is far from invulnerable. Although the intricacies of the upcoming race remain unknown, underlying structural conditions suggest far rockier terrain may lie ahead. In particular, four crucial objectives keep BJP strategists up at night: expanding beyond regional strongholds, recruiting new — and retaining old — coalition partners, withstanding a disappointing economic performance, and contending with fluctuations in voter mobilisation. The party’s performance in the 2019 election will hinge on its ability to address these potential vulnerabilities and the Opposition’s ability to exploit them.

Pulling off an encore of the BJP’s sweeping 2014 victory will be a tall order; to compensate for potential losses in its core areas, the party must venture into new territory. In 2014, the BJP swept areas where it traditionally enjoys strong support in northern and western India. Just eight states — Bihar, Chhattisgarh, Gujarat, Jharkhand, Madhya Pradesh, Maharashtra, Rajasthan, and Uttar Pradesh — accounted for over 75% of the BJP’s tally in Parliament. 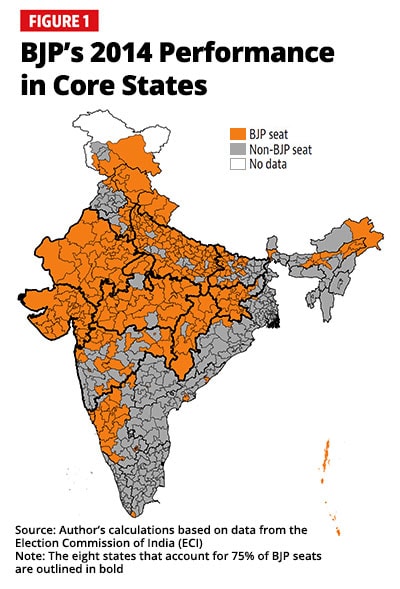 Replicating the performance will be difficult. After all, Indian voters are legendary for their tendency to harbour anti-incumbency sentiments; research suggests that members of Parliament (MPs) are just as likely to get thrown out of office at the end of their term as to get voted back in. There are also state-level anti-incumbency effects that have negative spillovers on national politics. Parliamentary candidates representing a given state’s ruling party enjoy an electoral advantage in national elections, but only when national elections are held early in the state government’s term. Once this honeymoon period is over, holding power in India’s states becomes a liability in general elections. This poses a problem for the BJP, which is the ruling party in all eight of these core states; in five of them, its governments are nearing the end of their terms.

Because Modi and BJP president Amit Shah know engineering another sweep of these core states will be difficult, they have focused on expanding the BJP’s footprint into parts of the country where it traditionally has been weak. Hence, the BJP’s painstaking devotion to breaking into India’s Northeast, which is often seen as inconsequential to the overall electoral picture given its sparse population. Yet the region boasts 25 parliamentary seats, a tempting prize for a party that covets new territory to compensate for losses likely to be sustained elsewhere. Thanks to a series of recent triumphs, the BJP now sits in government in seven of the eight northeastern states and is building up organisational and alliance networks across the region. Whereas the Congress retains the capacity to put up a fight in the Hindi heartland, its stature in the Northeast has diminished.

Having established a foothold in northeastern India, the BJP now aims to increase its strength along India’s eastern seaboard in Andhra Pradesh, Odisha, Tamil Nadu, Telangana, and West Bengal. With the exception of Andhra — where the BJP has worked primarily through its now estranged alliance partner, the Telugu Desam Party (TDP) — the aforementioned states serve as a firewall the BJP has struggled to penetrate in national elections. Together, these five states collectively account for 144 seats in parliament. Each is home to one — or more — powerful party with strong linguistic, regional, and cultural identities the BJP currently lacks.

However, this firewall may be fracturing. In West Bengal, the BJP trails the ruling Trinamool Congress in terms of statewide appeal. But it views the demise of the two principal opposition forces — the Left and the Congress — as providing a crucial opening. Odisha’s ruling Biju Janata Dal won 20 of 21 parliamentary seats in 2014, ceding just one to the BJP. But the latter won a quarter of the vote and has subsequently performed well in municipal elections. In Tamil Nadu, the BJP is a bit player on its own but sees the potential to make inroads through alliances. Fissures within the ruling All India Anna Dravida Munnetra Kazhagam have given the BJP hope that the party system might be ripe for realignment.

Sustaining previous hard-won gains and breaking new ground in pockets of the country outside BJP strongholds, however, will require partners. On this score, the BJP’s prognosis is mixed.

In three recent state elections — Goa, Manipur, and Meghalaya — the BJP failed to emerge as the single largest party. Nonetheless, the BJP formed government in all three by winning over smaller parties that decided to join a party gaining momentum rather than one losing it. However, traditional BJP allies are voicing concerns about the party’s methods, raising the possibility that its coalition could fracture. The Shiv Sena announced in January that it would contest the 2019 elections alone. In March, the TDP withdrew from the NDA over the denial of “special category status” for Andhra. These ruptures, while not fatal or irreversible, complicate the BJP’s electoral arithmetic.

Luckily for the BJP, the Opposition remains in disarray. While the Congress will likely gain seats in 2019, its leaders privately admit that a triple-digit figure would be a stretch. Left parties have seen a precipitous decline nearly everywhere save Kerala. The Aam Aadmi Party has struggled to extend its reach beyond the national Capital. Moreover, with the exception of the 2015 Bihar elections and recent Lok Sabha bypolls in Uttar Pradesh, parties opposed to the BJP have failed to forge a united front. Regional players could give the BJP a run for its money, but doing so will require them to work cooperatively — something that does not come naturally to bitter rivals.

But it is not only allies the BJP must worry about retaining; many voters who were swayed by Modi’s promise of ushering in ‘acche din’ by reenergising the Indian economy have also grown restive. As economic progress has fallen short of expectations, anxieties about the lack of jobs have led to massive popular protests in state after state.

BJP strategists once believed that economic renewal would be the hallmark of the 2019 campaign. Unfortunately for them, economic growth remains well below the country’s potential. A failure to deal quickly with a systemic banking crisis has plagued the investment cycle. Inflation, which has fallen from double-digit levels, remains a risk in an election year when the pressure to spend will be elevated. Furthermore, the Modi government’s demonetisation exercise and the sweeping Goods and Services Tax (GST) reform have hurt short-term growth. More importantly, job growth has been anaemic. According to the Reserve Bank of India, total employment actually shrank between 2014 and 2016.

The BJP is betting that its flagship welfare schemes might inoculate it against its patchy economic record. Stung by Rahul Gandhi’s ‘suit-boot ki sarkar’ jibe, Modi has doggedly tried to burnish his pro-poor credentials by doubling down on major welfare schemes — such as Jan Dhan Yojana, Ujjwala, and Pradhan Mantri Awas Yojana.

These efforts notwithstanding, economic travails are especially apparent in rural India. Although once the bailiwick of the Congress, many rural voters in 2014 switched their allegiance to the BJP. The rural shift toward the BJP could easily swing back to the Congress; despite Modi’s promises of doubling agrarian incomes by 2022, agriculture remains in a state of disrepair.

A clear warning shot was fired in December 2017’s Gujarat elections. Although it retained its majority in the state assembly, the BJP encountered serious rural opposition — especially in Saurashtra — where the Congress prevailed by capitalising on caste politics and the waning fortunes of farmers. In March 2018, as many as 50,000 farmers descended on Mumbai to demand the BJP-run Maharashtra government move swiftly to aid them. All eyes will be on upcoming state elections in Karnataka (in May) and Chhattisgarh, Madhya Pradesh, and Rajasthan (in December) to discern whether this drop-off in rural locales is sustained.

A final concern for the BJP is mobilisation. In 2014, the party successfully channelled popular disaffection with the Congress into a record voter turnout. Indeed, there was a strong association between the growth in voter turnout and the improved fortunes of the BJP in the 2014 election. A key source of strength came from young voters: states with the largest increases in the share of first-time voters in 2014 also experienced the biggest gains in BJP vote share. With the novelty of Modi and BJP rule in New Delhi wearing thin, there is a risk that voter turnout will return to ordinary levels, reducing the BJP’s enthusiasm advantage.

One key demographic the BJP believes it can energise is women. Although they do not vote as a bloc, the party believes several of its welfare schemes can influence their votes. This is significant because Indian women are voting in greater numbers than ever before. In 2014, women voted at higher rates than men in a majority of states. At the state level, the female turnout now regularly surpasses the male turnout.

The real challenge, however, is mobilising voters as the incumbent. One possibility is that the BJP will choose to invoke the Hindutva card more intensively to energise its base. Such a move toward polarisation would become even more likely if the Opposition successfully bands together to forge a common anti-BJP front. Yet such a risky strategy could turn off as many voters as it galvanises.

One year in advance, Modi and Shah are recalibrating their approach to mitigate the BJP’s unexpected challenges. The recent Budget was packed with pro-poor rhetoric and numerous sops meant to calm rural anger. As existing allies are growing wary of the BJP’s modus operandi, party leaders have stepped up their outreach to smoothen frayed relations.

The Opposition is making adjustments as well. Gandhi and the once-dithering Congress appear more focused and consistent. The Opposition, at least rhetorically, is embracing the need to forge a common anti-BJP front in 2019. Twelve months is an eternity in politics, but one thing has become evident: once thought to be a cakewalk, the 2019 election is turning into a contest.

Milan Vaishnav (@MilanV) is senior fellow and director of the South Asia program at the Carnegie Endowment for International Peace. This is the first in the “India Elects 2019” series, a collaboration between Carnegie and the Hindustan Times.