Till Wednesday night, India vaccinated a total of 949,147 people, or 712 per million in Phase 2, which covers the most vulnerable sections of the general public. The government hopes that drafting more private hospitals to administer vaccines and keeping facilities open 24x7 will help increase the numbers. The government has previously said its ultimate target in this phase is 5 million shots a day. 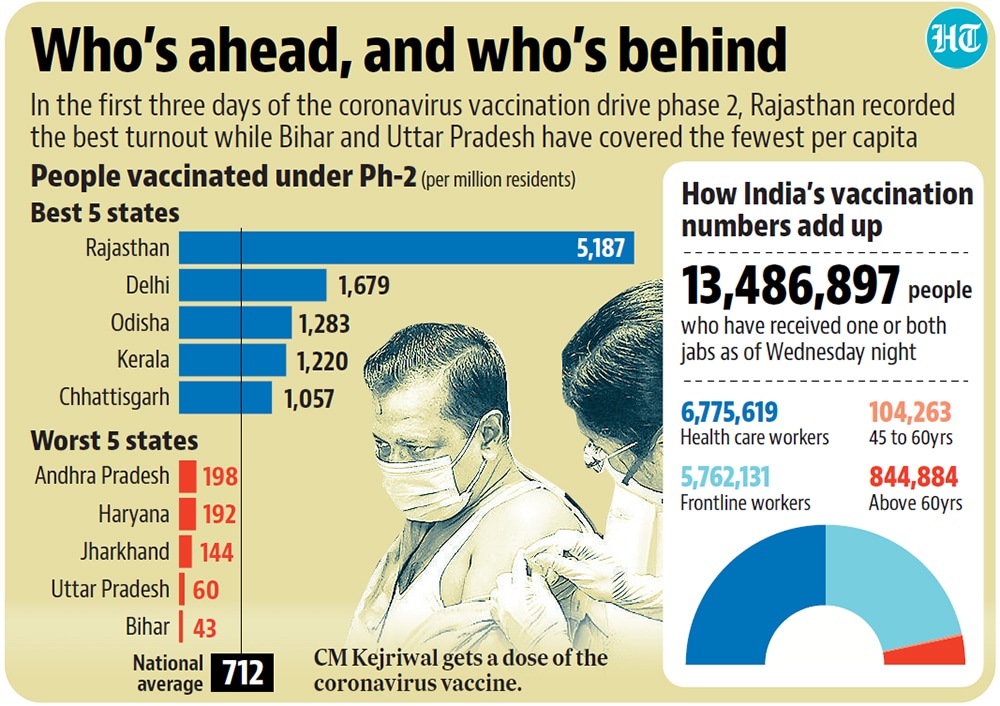 To be sure, the per-million metric provides an easy comparison, although a more accurate denominator is the number of people over the age of 60 and over 45 with co-morbidities – a number that wasn’t immediately available for all states and Union territories. In all, the second phase of the drive is expected to cover 270 million people.

HT collated and analysed data for India’s 20 most populated states. In the national capital, 33,259 people lined up to receive jabs in first three days of Phase 2 – an average of a little over 11,000 shots a day. In contrast, the three days before the start of the second phase, when only health care workers and front-line workers were getting jabs, the city averaged 19,176 shots a day. On average, 316,382 people have received shots every day across the country under Phase 2 — this has less than halved (653,565 doses administered per day) from the three days before the opening up of the drive.

In Bihar, the fewest people showed up to get shots in the first three days of Phase 2 — only 43 doses were administered per million residents in the state. Uttar Pradesh, with 60 shots per million, and Jharkhand (144 shots per million) accompanied it as the three worst-performing states. Bihar and Uttar Pradesh’s numbers were also skewed by their huge populations and the significant proportion of their population under the age of 18 (they are both among India’s youngest states).

The numbers account for those vaccinated in the Phase 2 of the vaccination drive, which includes persons above 60 years of age and those who are 45 years or more and suffering from certain medical conditions. Overall, 949,147 people received shots in this category across India till Wednesday evening. On the other hand, 13 times as many (13.5 million people, or 10,118 per million population) people have received at least one shot under the first phase of the drive, which started on January 16.

Experts say there is a need to speed up the drive at least six to 10 times if the country plans to achieve its target of immunising 300 million people most at risk of exposure or death by August.

“So far we have immunised only 1% of our population, while Israel has immunised 85% and the US 23%. At the current pace, we will not be able to achieve the target even by the end of the year. We have to speed up the vaccination drive at least six to 10 times,” said Dr SK Sarin, director of the Institute of Liver and Biliary Sciences, who headed the Delhi government’s first committee on managing Covid-19 infections.

The first phase of the drive, which is still on, included health care and front-line workers. Of these, 6.8 million health care workers were administered at least one dose of the vaccine, while 2.8 million received both doses till Wednesday. Overall, a total of 16.3 million doses of vaccines have been administered across the country as of Wednesday – the 47th day of India’s vaccination campaign.

The Union government, which was releasing daily vaccination bulletins that listed the break-up of state-wise figures for the first phase of the inoculation drive, has not done so in the first three days of Phase 2. In the absence of official data at the national level, HT’s vaccination data was collated numbers from respective state governments.

With the threat of mutant variants of Sars-CoV-2 and some parts of the country witnessing an uptick in cases, director of Centre of Cellular and Molecular Biology Dr Rakesh Mishra agreed that the drive needs to pick pace. “The vaccination drive needs to be sped up to reach as many as possible as more and more vaccines become available,” he said.

“I think, if we need to achieve our target we need to have vaccination in more places, we have to open it up in a manner that those who are willing to take the vaccine are allowed to come rather than calling people and them not turning up,” said Dr Randeep Guleria, director, All India Institute of Medical Sciences. He said that people in the high risk group residing in regions seeing a spurt in infections should be immunised quickly “as it will help in decreasing the mortality and hospitalisations.”

An editorial in HT recently called for more vaccines to be approved, that their sales in the open market be allowed, and that the drive be opened to anyone wanting to be vaccinated.

Dr Sarin said it’s also important to make sure everyone living in regions such as Maharashtra seeing a surge in cases should be immunised on priority basis.

There were teething troubles reported on the first day of the drive’s Phase 2. These issues appeared to be largely sorted by the second and third day, with very few problems reported.

“In the beginning there could have been issues as we are trying to vaccinate one-sixth of humanity, but it will all get streamlined as days progress. In fact, most issues faced on day one have already been sorted,” said RS Sharma, chairman empowered group on Covid vaccinations.

What is left is effective messaging to be able to overcome vaccine hesitancy among masses, say experts.

“In urban centres the turnout of individuals needing vaccination is usually not a problem; it is the semi-urban and rural areas that require more focus,” said Dr MC Misra, former AIIMS director.

Dr K Srinath Reddy, founder, Public Health Foundation of India, added: “As more people get vaccinated, it builds confidence among those sitting on the fence. In a month or so it will be clear whether India will meet the target or not.”

The Centre is looking at expanding coverage in coming weeks. “We currently have the capacity to vaccinate at least double of what we are doing now per day, and in coming weeks we will be scaling up. We are aiming at vaccinating 5 million individuals on a daily basis,” said Dr NK Arora, member, National Task Force on Covid-related matters.