The increasing recruitment by Consulting firms, at the expense of FMCGs and Consumer Durables is indicative of the economic downturn

One segment seems unaffected by the economic slowdown and sluggish growth in corporate earnings -- students graduating from the top tier of business schools in India. February saw placements across the premier business and management schools across the country, including the prestigious Indian Institutes of Management (IIMs). Initial data reported by IIM Ahmedabad show that this year’s placement season has been a huge success, building upon those of previous years.

The signs of the economic downturn, however, are visible elsewhere, with consulting firms ramping up recruitment, even as traditional recruiters such as FMCG (fast moving consumer goods) or consumer product companies, banks, automobile firms, and consumer durable makers cutting back on recruitment.

The data is from official placement reports published by IIM-A and audited by an independent agency. The reports comprise extensive details on placements, including particulars of the salary, the sectors, and roles. A review of these reports since 2011 shows that for domestic placements of the institute’s two-year Post Graduate Program (PGP), the median salary has increased consistently. However, the same cannot be said about the program’s international placements, which show a more erratic trend. Additionally, management consulting has emerged as the highest recruiting function over recent years, taking over from marketing and sales which predominated in the earlier part of the decade.

In 2011, there were 260 domestic placements with median compensation of Rs 15.15 lakh per annum. 2019 saw 375 domestic placements with a median salary of Rs 24 lakhs. After adjusting for inflation between 2011 and 2019, the salaries have still risen by nearly 50% in this period. In addition, the gap between the minimum and maximum salaries has increased considerably in this period, from a difference of Rs 29 lakh in 2011 to Rs 55 lakhs in 2019. (See Chart 1A) In terms of international recruitment, the number has fallen from a peak of 40 in 2012 to just 13 in 2019. The salary trend for international placements is also volatile, with median salaries showing fluctuations in this period. (See Chart 1B) 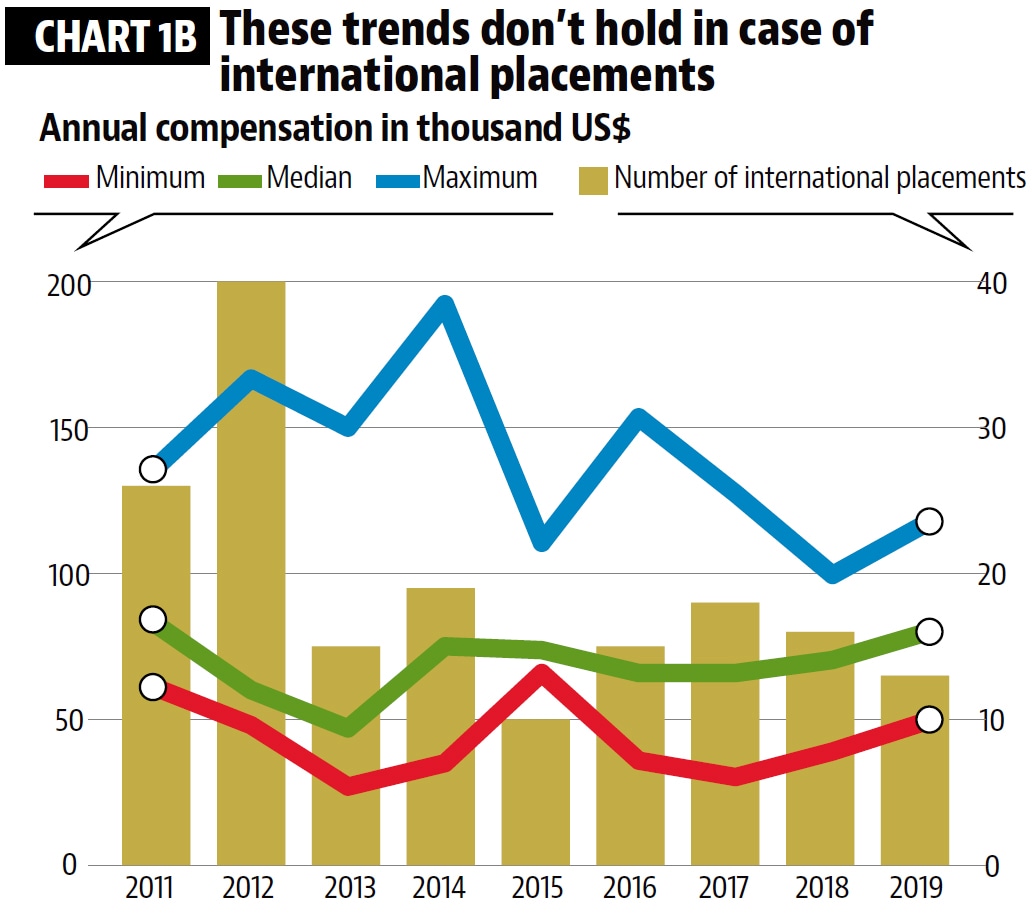 In most of the top B-schools this year, management consulting firms such as Mckinsey & Co, Boston Consulting Group (BCG), Bain and Accenture have dominated recruitment. Data for IIM-A shows that consulting firms have dominated recruitment over the past five years. In 2019, for instance, nearly 35% of the placements were from the management consulting domain. This is in stark contrast to 2011, where marketing and sales was the most dominant function, accounting for nearly 38% of recruitment.

FMCG firms such as ITC and Unilever accounted for only 12% of recruitments in 2019, down from at least 25% in 2011. This is revealing, since management consulting is a service that will be required irrespective of the situation of the economy. In an interview to the Economic Times earlier, Amit Karna, the chairperson of placements at IIM-Ahmedabad said: “Consulting firms are hiring more this year. Initial discussions with these firms indicate that their order books are full. Their clients are signing up for cost effectiveness.” (See Chart 2) While salaries might be increasing for IIM graduates, the changing composition of the recruitment holds clues regarding India’s economic slowdown.

(howindialives.com is a database and search engine for public data)
Get Latest India Newsalong with Latest Newsand Top Headlinesfrom India and around the world.
SHARE THIS ARTICLE ON
Topics
Salary India
Salary India
Subscribe to our best newsletters
Subscribed to newsletter successfully
Thank you for subscribing to our Daily News Capsule newsletter.