Number theory | The Indian economy is three economies combined into one

The Monetary Policy Committee (MPC) of RBI began its bimonthly meeting on August 3. One of the most awaited takeaways from the meeting will be the MPC’s GDP growth projection, which will be released in the MPC resolution on August 5.

The Monetary Policy Committee (MPC) of RBI began its bimonthly meeting on August 3. One of the most awaited takeaways from the meeting will be the MPC’s GDP growth projection, which will be released in the MPC resolution on August 5. In its World Economic Outlook (WEO) update issued last month, IMF now expects the Indian economy to grow at 7.4%, 80 basis points less than its April projection. One basis point is one hundredth of a percentage point. While RBI’s June 2022 growth projection of 7.2% is already lower than the revised IMF forecast, it remains to be seen whether MPC makes a further downward revision to this number. An HT analysis of some high frequency indicators, two of which were released on August 1, suggest that a multitude of trends are at play in the Indian economy at the moment. Here are four three charts which explain this argument in detail.

India’s Purchasing Managers’ Index (PMI) Manufacturing climbed to 56.4 in the month of July. Not only is this a significant jump from the June reading of 53.9, it is also the highest PMI manufacturing value since November 2021 which had a reading of 57.6. While PMI Services for July moderated to 55.5 from its 11 year peak of 59.2 in the month of June, it was still comfortably ahead the psychological threshold of 50. A PMI value above 50 signifies expansion in economic activity over last month.

Meanwhile, Goods and Services Tax (GST) collections for the month of July (they capture economic activity in the month of June) were reported to be ₹1.49 lakh crore, making it the fifth consecutive month when monthly GST collections have been in excess of ₹1.4 lakh crore. “Better reporting coupled with economic recovery has been having positive impact on the GST revenues on a consistent basis”, a press release from the Ministry of Finance said. … but a slightly broad based analysis paints a sombre picture as far as the informal sector is concerned…,

While an improvement in PMI values is good news for the economy, it needs to be kept in mind that PMI is more aligned to the formal sector in the economy. A look at other high frequency indicators, such as the index of eight core sector industries and the Index of Industrial Production (IIP) is illuminating. Latest available data for index of core sector industry and IIP is for the month of June and April 2022 respectively. While both indices have shown a robust growth in year on year terms due to base effect – core sector growth in June was 12.7% and IIP manufacturing growth in April 2022 was 6.3% -- a longer term view of the absolute numbers for these two series paints a different picture. Neither is yet to reach significantly above its pre-pandemic value, underlining the fact that the post-pandemic recovery is more statistical than tangible. To be sure, most economic indicators have reached pre-pandemic values now.

The fact that indices such as IIP also include informal sector activity unlike PMI numbers, suggests that the lag in informal sector numbers could have neutralised the buoyancy in the formal sector. Even on the question of healthy GST collections, HSBC’s Chief India Economist Pranjul Bhandari had pointed an important caveat in a research note dated June 24:L “As for GST revenue, true that it has risen recently. But, once we scale it with GDP, the rise is not dramatic – and, if the informal sector had not been as disrupted, GST revenue may have been higher.” 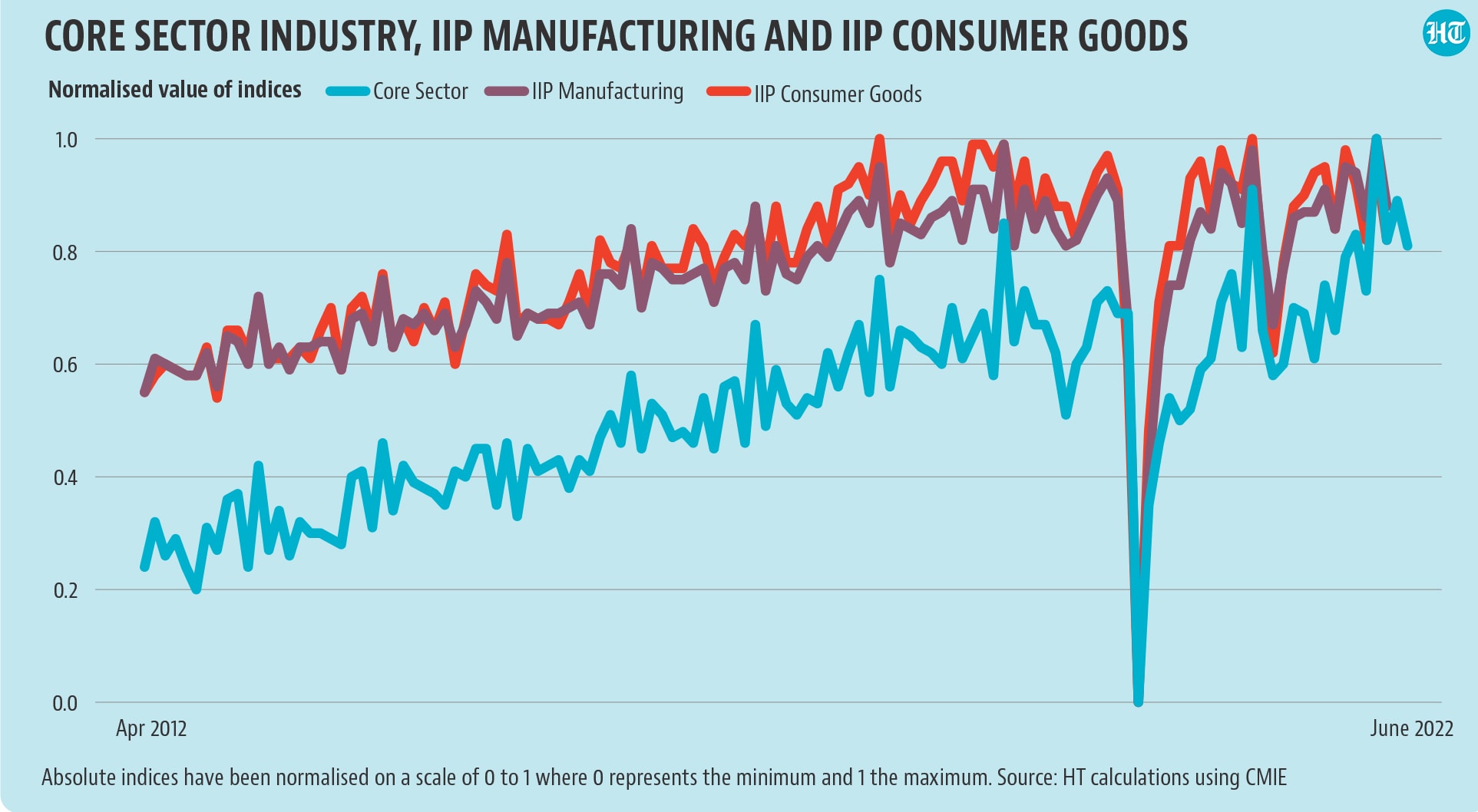 …and the labour income scenario continues to be grim.

If one were to deflate average rural wage data with the rural Consumer Price Index, it shows that real rural wages have been declining for seven consecutive months on a year-on-year basis. Even when real wages have not been contracting, the growth has been very tepid. Because India does not have official high frequency data on urban wages, rural wages are considered to a proxy for blue collar work in the Indian economy. The dull blue-collar wage environment, when seen with the continuing weakness in consumer confidence, as evident in RBI’s surveys, and the weakness in informal sector business activity, highlights the consumption demand headwinds to a sustained growth revival in the economy. 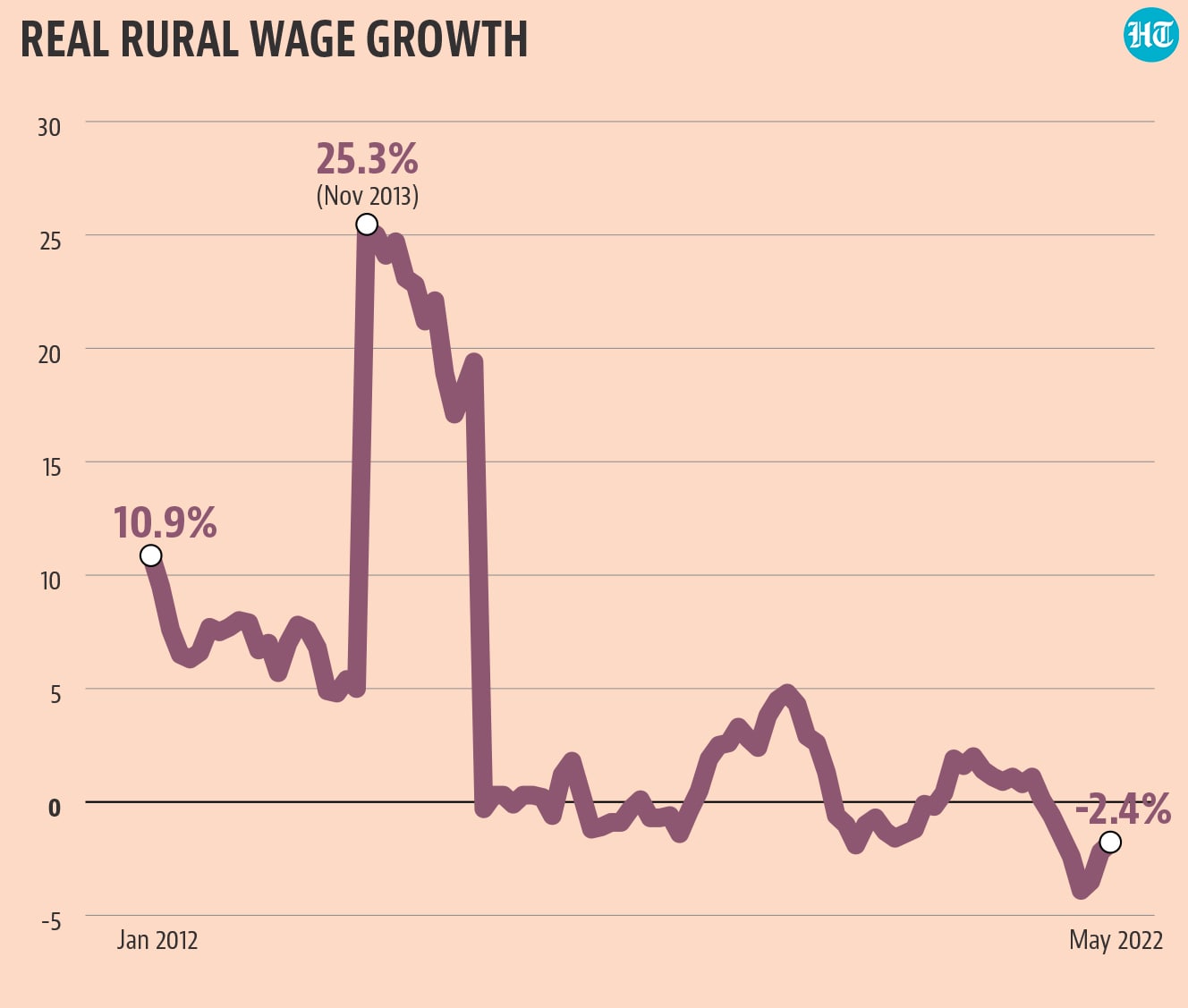 The overall direction of the Indian economy will not be determined by just one of these three conflicting trends, but the net result of their interplay. It is another matter that different narratives about the state of the economy tend to look at such trends in silos rather than together.

Get Latest India Newsalong with Latest Newsand Top Headlinesfrom India and around the world.
SHARE THIS ARTICLE ON
Topics
number theory
number theory
Subscribe to our best newsletters
Subscribed to newsletter successfully
Thank you for subscribing to our Daily News Capsule newsletter.