The judges said farmers must be given Rs 100 per quintal of paddy procured if they did not burn the residue, and asked the administrations to pay the cost of renting machinery that eliminates paddy stubble for farmers with less than five acres of land.
Share Via
Copy Link
Hindustan Times, New Delhi | ByBhadra Sinha

The Supreme Court took the Union government and the administrations of Punjab, Haryana and Uttar Pradesh to task on Wednesday for failing to stop the problem of farm fires, ordering officials to immediately offer cash incentives as well as foot the cost of hiring machines that can take care of crop residue for farmers with small and medium landholding.

The judges were hearing a suo motu matter – an issue they themselves took up -- three days after one of the worst spells of smog choked the capital with near-record levels of pollution. Most of it was due to smoke from farm fires, exacerbated by weather conditions.

“This is due to your failure. Pollution is pollution. It’s bad for everybody. How can you say there is no solution? We expect little more from the responsible democratic government of the day,” justice Arun Mishra, who was on the bench along with justice Deepak Gupta, said at a hearing that went on for two hours, during which the chief secretaries of three states and the top lawyer of the Union government were chastised. 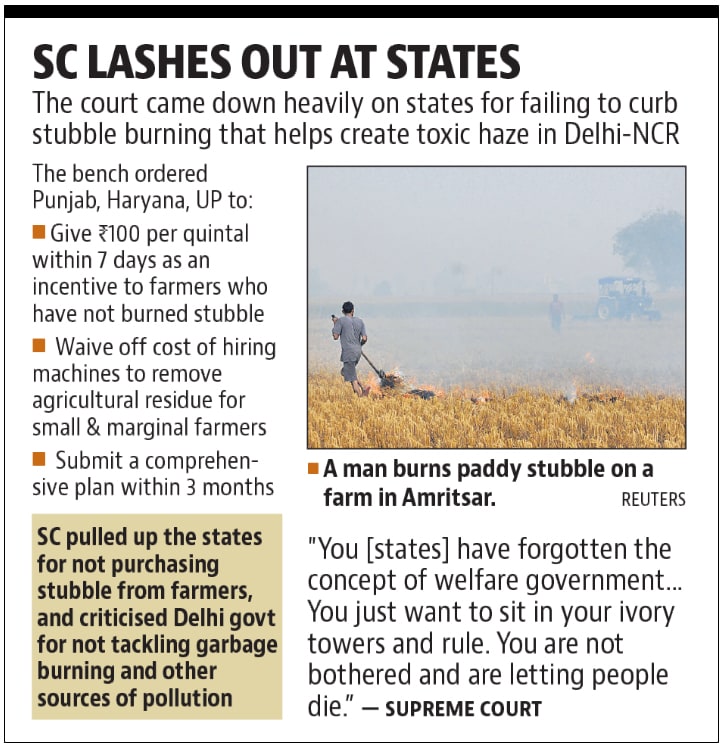 The judges said farmers must be given Rs 100 per quintal of paddy procured if they did not burn the residue, and asked the administrations to pay the cost of renting machinery that eliminates paddy stubble for farmers with less than five acres of land.

Between mid-October and mid-November, tens of thousands of farmers in the three states typically set fire to crop residue after harvesting as a quick and cheap way to turn the field around for sowing winter crops.

At present, farmers are entitled to hiring the requisite machinery at subsidised rates from cooperative societies, but the court was told that farmers still found the method inviable – prompting the court to order the charges to be waived entirely.

Through the hearing, the judges remarked on the gravity of the problem several times and rejected explanations by the representatives of the governments. “Pollution is bad. If attorney general says we have no suggestion, this cannot be the way a democratic government will function,” justice Mishra remarked.

At one point, when informed that farm fires were lower in Haryana than Punjab, the judges summoned Punjab’s chief secretary sternly. “You think only poor farmers should be penalised. And officers should go free? Is this the way you people are acting? This is sheer inaction. Call the chief secretary. We have several questions,” the judges said.

The chief secretary of Punjab, where the maximum number of instances has taken place, told the court that the state had asked the federal government for financial help to pay farmers an incentive, which would require about Rs 1,800 crore – an expenditure the state could not make since, he added, the administration was short of funds and was struggling to even pay salaries.

“Then you have to vacate. If you can’t provide funds, you have no right to rule,” justice Mishra said to the chief secretary, Karan Avtar Singh. The bench later assured the government that it will look into the issue of funding.

Attorney general KK Venugopal too faced strong remarks. “What’s the use of all this development if we can’t control stubble burning... It’s a question of life and death of millions of people. How many people will have to suffer cancer, asthma...” justice Mishra said.

The Delhi government, too, faced criticism from the judges. “You have not found any solution to garbage burning or unpaved roads, but you have found only one solution,” the judges told the Delhi chief secretary.

The bench ordered the government to take measures to address the sources of pollution, ordered pits and potholes on the Capital’s roads to be cleared within three weeks and a comprehensive plan drawn up to tackle garbage burning, traffic congestion and other sources of pollution.

“This is complete apathy on the administration’s part. Delhi is saved only because there is a monitoring committee (set-up by the top court to look into the unauthorised construction),” the bench said.

The bench told the chief secretary that as the top bureaucrat he was responsible to maintain Delhi. When the officer attempted to explain the role of civic bodies, the bench said the corporations in Delhi were “corrupt.”

“The corporation is full of corruption. They do not act against anything. The problem in this country is that the law of torts is not developed and we are not holding erring officials responsible,” Justice Mishra said.

Environment minister Kailash Gahlot said taking action against garbage burning and controlling road and construction dust are primarily the tasks of the municipal corporations of Delhi.

“The onus to curb garbage burning and road dust primarily is with the MCDs. Teams of DPCC and environment department, which are way fewer in numbers compared to that of the MCDs, are doing a lot of inspections and fining violators. Also, I hope the other neighbouring states also take proactive measures after the SC’s hearing,” he said.

Punjab chief minister Captain Amarinder Singh on Wednesday said his government will implement the Supreme Court order to provide the financial incentive and added that the centre would have to come to the rescue of the states, which were facing serious fiscal constraints.

While the GST regime stifled the financial resources of all states, Punjab, in particular, was in dire straits due to its massive debt burden, he said.

Representatives of UP and Haryana, too, said they would follow the order and take required steps .