Lok Sabha elections 2019 Rally Highlights| ‘U-turn babu an expert in claiming Centre schemes as his own’: PM Modi in Andhra

Up to Priyanka to decide if she wants to contest election or not: Rahul Gandhi

Referring to demands from party leaders that his sister Priyanka Gandhi Vadra should contest, Gandhi told PTI in an interview that she will have to take a call on whether to fight the polls or not.

Speculation about the newly appointed Congress general secretary contesting grew after she asked people in Varanasi on Thursday whether she should fight the polls from the temple town, the constituency from where Prime Minister Narendra Modi will seek a re-election.

If the party tells me, I will fight from anywhere: Priyanka Gandhi

A day after hinting that she is not averse to contesting against Prime Minister Narendra Modi in the Lok Sabha polls, Congress general secretary Priyanka Gandhi Vadra attacked him for “ignoring” his own Varanasi constituency.

On Thursday night, reacting to a suggestion from a party worker that she should fight the elections from her mother Sonia Gandhi’s Rae Bareli constituency, Priyanka Gandhi had quipped, “Shouldn’t I fight from Varanasi?”She fuelled more speculation on this possibility on Friday by targeting Modi over the state of the constituency that sent him to Parliament in 2014.

But when reporters asked her a direct question, she said, “If the party tells me, I will fight from anywhere.”At a “nukkad sabha” – street corner meeting -- in Ayodhya, she lashed out at the Bharatiya Janata Party, calling it “pro-rich”, “anti-farmer” and against the interests of the armed forces.

Referring to her own recent visit to Varanasi, Priyanka Gandhi said she was told about the road from the airport to the city when she asked about “development” in the area.

The Central Election Committee of the Bharatiya Janata Party has released the twelfth list of 11 candidates for the ensuing General Elections to the Parliamentary Constituency of different states.

U-turn babu is an expert in claiming Centre’s schemes as his own: PM Modi

“And now, this U-turn babu has found such friends who move on “bail-gadi”, those who are out on bail. Now he’s on a track where Pakistan is looking at him as its hero.

To satisfy his own ego, to hide his inabilities, the people running the govt in the state are telling all kinds of lies. The U-turn babu is an expert in telling lies and is also an expert in claiming centre’s schemes as his own. That is why people call him “sticker babu”,” said PM Modi.

Andhra govt schemes are scams in themselves: PM Modi

“In Andhra, people say that there are no scams in government schemes. Instead, those schemes themselves are the scam.

From new capital to different schemes, the people of Andhra know whose pockets are being lined.

When your chowkidar raised questions, the U-Turn babu took a u-turn from Andhra’s development and broke away from the NDA,” said PM Modi.

Your vote will ensure the double-engined development: PM Modi

“Your vote will ensure the double-engined development. Double engine meaning BJP government at Centre and in the state also,” said PM Modi in Andhra Pradesh.

‘No permission will be needed from any dept to open a new business’: Rahul

“Right, if the youth wants to start a new business, they need to go and take permission from various departments and agencies, and then corruption plays a role in those departments. However, if Congress is voted to power, no youth will have to take permission from any department. Instead, the govt will stand by their side in starting their business and also creating employment,” said Rahul Gandhi in Kurukshetra.

“PM Modi promised ₹15 lakh to the poor. I’m not going to lie, giving Rs. 15 lakh is not possible. However, the Congress has come up with the NYAY scheme for those who earn less ₹72,000 per year. We promise to give money to those who earn less than ₹12,000 per month,” said Rahul Gandhi in Haryana.

“There’s no shortage of money, which is why Congress has decided that if PM Modi doesn’t give justice to the farmers, small businessmen, and the poor, we will serve justice to them,”said Rahul Gandhi .

The CPI Friday announced that it would give a minimum pension of ₹9,000 per month, grant full statehood to Delhi and Puducherry and a one-time comprehensive loan waiver for farmers as part of its manifesto for the Lok Sabha polls. The Communist Party of India (CPI) also proposed a law for agricultural workers and a separate budget for agriculture.

The party said it would increase the number of guaranteed employment days under the MNREGA scheme to 200 days per family and ensure wage payment within the period of guaranteed statute and at par with legal minimum wages for unskilled farm labour.

Centre alloted 1.50 crore pucca houses to the poor of this country: PM

“We gave 1.50 crore pucca houses to the poor of this country but the govt here said they would allot them flats. How many did actually get the flats,” asked PM Naredra Modi.

Election in April or May -- TRS would have lost its glory: PM Modi

KCR was responsible for wastage of so much money by going in for separate elections for assembly and Lok Sabha. Who is bearing this burden? Then, too, some astrologers might have advised him to go in for early polls. Because, you will be outshone in the glory of Modi. Election in April or May -- TRS would have lost its glory.: PM Modi

Was astrology behind delay in cabinet formation: PM Modi

In the last assembly elections, you gave the verdict. But what has happened? The hastiness shown in conducting the elections was not shown in expanding the cabinet. Three months to form government. Astrologers advised for early elections. Were same astrologers responsible for stalling the formation of cabinet?: PM Modi hits out at Telangana govt

You are not going to elect just one MP or one MP but a new India: PM Modi

From protecting the country to farmers’ welfare, I never left any field. On April 11, you are not going to elect just one MP or one MP but a new India to fulfil every needs of Telangana people. Entire world is acknowledging our progress, our commitment, self-reliance, self-respect. Next five years, this will sustain. New India will be heralded. We shall go together hand in hand: PM Modi

You saw the previous governments of Congress and other parties. You have also seen five years of this Chowkidar. There are many programmes that I have taken up and are in progress. From Swarch Bharat; basic needs of people to testing of anti-satellite missile. This goverment has done. We have done wonders. I could run a decisive government: PM Modi

I toiled day and night to improve your living standards.. braved all the attacks from my rivals.. I could succeed only because of your blessings.. I did not deviate my sankalp: PM Modi

With your blessings, I ran the government for five years: PM Modi

Your chowkidar has come to you to seek your blessings once again, PM Modi says Modi in Mahabubnagar.

With your blessings, your support, I ran the government for five years with commitment and dedication

“I listened to Narendra Modi’s speech in which he promised to give ₹15 lakh to every Indian. He said it three-four times. I got the idea that money must go the bank accounts of the poor,” Gandhi said at a public rally in Haryana’s Yamunanagar.

BJP govt doesn’t have courage to listen to your voices, says Priyanka Gandhi

I don’t think there has been a weaker government than the current one: Priyanka Gandhi

This govt doesn’t have courage to hear your voice. It doesn’t go to villages because it doesn’t want to hear discordant voices… Because this government has failed to deliver on its promises,” she said. This politics that seeks to keep you disempowered, negates you, what should we call it: Priyanka Gandhi

PM Modi has ignored his own constituency: Priyanka Gandhi

PM Modi has ignored his own constituency: Priyanka Gandhi

Priyanka Gandhi during campaigning in Ayodhya 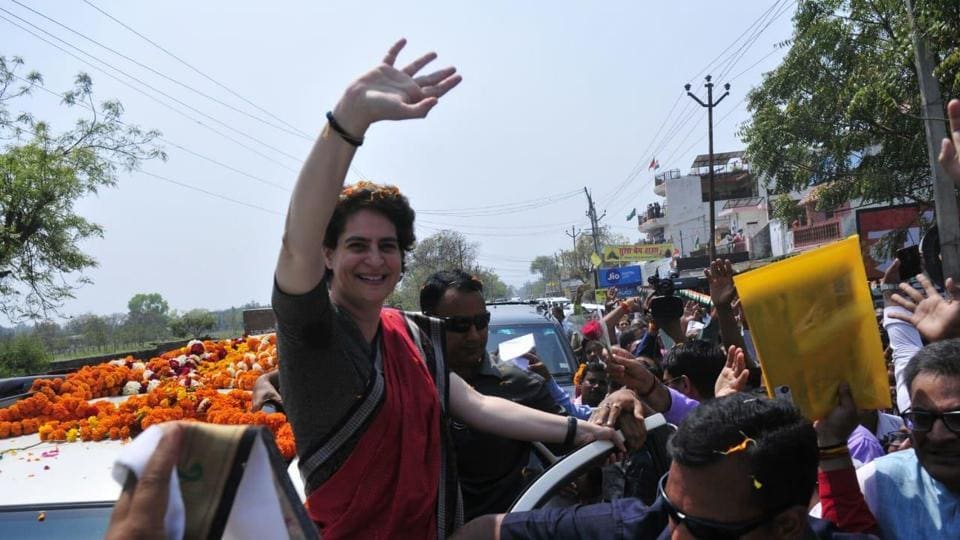 Union Finance Minister Arun Jaitley on Friday attacked the Congress-led UPA government blaming it for the clean chit given to all the accused in the 2007 Samjhauta blast case. Jaitley said the trial in court happened on the basis of evidence collected during the UPA regime.

He said the previous regime floated the theory of Hindu terror to gain political mileage and caught the wrong persons while letting the real culprits remain at large.

When India takes action against terrorists, some here ask for proof: PM

“It has been one month, Pakistan is still counting the dead bodies and our rivals are seeking proof for Balakot strike,” said PM Modi adding, “When India takes action against terrorists, enters their home and kills them then some here ask for proof.”

Shouldn’t we teach a lesson to those who insult out army, scientists: PM Modi

Shouldn’t we teach a lesson to those who insult out army, out scientists: PM Modi

India is capable of watching over space too: PM Modi

India is capable of watching over space too: PM Modi

Those people who think this achievement is small, India is watching over the words and actions of those peole too: PM Modi taunts opposition.

People deserve the credit for my govt’s success in five years: PM Modi

I could do whatever I could for Odisha because of your support....If there is someone who deserves the credit for my government’s five years success, it’s the people: PM Modi

Country exists because of people like you: PM Modi

This chowkidar has come among you to seek your blessings: PM Modi

This chowkidar has come among you to seek your blessings : PM Modi at Koraput