The India Meteorological Department (IMD) has predicted ‘intense heavy rainfall’ in Mumbai over the next two days. BMC’s disaster management cell has appealed citizens to not venture near sea as IMD has predicted high tide measuring 4.90 metres today at around 1.44 pm along with heavy rainfall. Today’s high tide is the highest high tide of this year’s monsoon.Train services in the city have been disrupted due to waterlogged rail tracks. Road traffic is also slow moving due to heavy showers, Mumbai police said.Highlights:

In a notification issued at 11:45 pm on Saturday, the Met department has said intense spells of rain very likely to continue with gutsy winds reaching 30-40 kmph in the districts of Mumbai, Palghar, Thane, Raigad, Ratnagiri and Sindhudurg during the next four hours.

‘Flight operations are normal, delays of 15 minutes in arrivals and 30 minutes in departures’: MIAL

‘Flight operations are normal with delays of 15 minutes in arrivals and 30 minutes in departures,’ Mumbai International Airport Pvt. Ltd..

Due to rains coinciding with high tide resulting in back flow of water in Kurla/Sion/Chunabhati section, services have been temporarily suspended between CSMT-Vashi on harbour line and CSMT-Thane on mainline in Mumbai, says Chief Public Relations Officer,Central Railway.

Water has receded at Andheri Subway

“Water has receded at the Andheri Subway. We request citizens to not believe in any rumours. We will be sharing all live pictures on this handle for updates,” the BMC tweeted on its official Twitter handle.

“Overflow from Tulsi lake and Dahisar river led to waterlogging across several areas of the park forcing us to close it for tourists on Saturday,” said Dinesh Singh, assistant conservator of forest, SGNP. “Minimal flooding happened at our offices. However, as of now no damage has been reported.”

IMD has issued a ‘red alert’ warning directing citizens to avoid leaving their home unless necessary owing to unfavourable weather conditions. A high tide of 4.9m is expected at 1.44pm.

Stay away from sea: Mumbai police

“Along with heavy rainfall forecast by IMD today, there is a high tide of 4.90 meters at 1:44 PM.

We request Mumbaikars to please stay away from the sea & venture out with care & caution. Please #Dial100 for any help & support in an emergency,” the Mumbai police tweeted.

Owing to heavy rains, the Mumbai education department has extended the deadline for third round of addmissions to first year junior college until August 6.

Earlier, the last date was August 5.

As heavy rains continue to lash the city, several schools remained shut while students in many others were picked up by their parents early.

Several people were seen stuck at Mumbai’s Mulund station due to waterlogging. 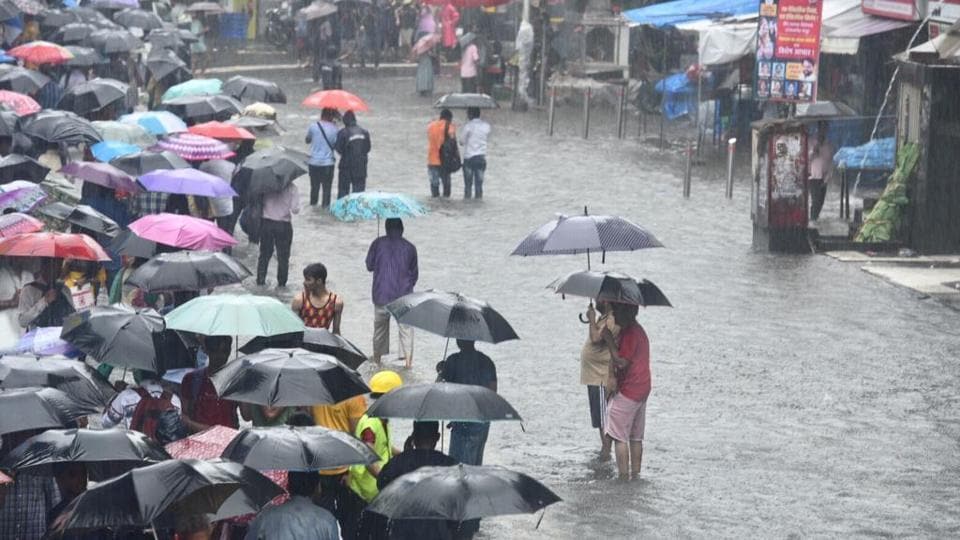 Due to waterlogging across the city, traffic has been diverted at following locations

Travel only if necessary: Mumbai police

The Mumbai earlier today tweeted and advised the people to ensure safety and take adequate precautions as the intense heavy rainfall is likely to continue over the next 24 hours.

The police is also tweeting about the waterlogged areas in the city at regular intervals.

The disaster management cell of Brihanmumbai Municipal Corporation has requested the citizens to stay away from beaches as the weather department has forecasted a high tide measuring 4.90 metres today at around 1.44 pm.

This willl be the highest high tide of this year’s monsoon.

Train servies in Mumbai and Thane were hit owing to waterlogged rail tracks.

As of now, trains in the Central railway network are functional with a delay of about 20 minutes or more.

At Mumbai’s Sion railway station, trains are operating with a restrictive speed whereas at Kalyan station, platform number two and three have been shut due to water logging, however, this has not impacted the train movements.

Severalroads are waterlogged due to heavy showers in Mumbai and that has led to slow moving traffic across the city.

Intense heavy rainfall is expected in Mumbai over the next two days, the India Met Department has said.

Rainfall updates.
Mumbai, Thane & Navy Mumbai including entire north kolkata is very likely to receive intense rainfall in next 24 to 36 hours.
Warnings are in place for heavy rainfall, gusty winds, for fishermen too
Avoid going to sea beaches for next 2 days & please take care. pic.twitter.com/cil9LvBBHy