On Friday, the Central Statistics Office (CSO) released India’s GDP figures for the quarter ending June 2019. At 5% this value is the lowest since March 2013.

The June quarter is not an aberration. India’s GDP growth rate has been slowing for five consecutive quarters now. This is only the second instance since December 1999 that the GDP growth rate has fallen for five straight quarters. Between March 2018 and June 2019, the Indian economy has lost 3.1 percentage points in terms of GDP growth. Anybody who thinks that the Indian economy is not in a serious crisis right now is being economical with the truth.

Finance minister Nirmala Sitharaman announced a number of measures on August 23 to boost economic growth. Exactly a week later, she announced a big-bang merger of 10 public sector banks into four. There has also been a promise of more measures to come, some leveraging the ₹1.76 lakh crore windfall that the government has received from the central bank. Will such measures yield results?

The measures announced in the conference held on 23 August can be classified into three broad categories and also listed in order of importance: boosting business sentiment in the economy, removing supply-side hurdles to the flow of credit (or simply making credit more easily available) and working capital, and boosting demand for new houses and cars.

To improve sentiment, the government scrapped a tax on foreign portfolio investors and an angel-tax that was irking start-ups and their investors; reiterated the launch of randomised and faceless income tax assessments and centralisation of income tax notices to address concerns of tax terrorism; and made slippages in mandatory Corporate Social Responsibility spending a civil offence rather than a criminal one.

To boost credit availability, the government said that it was frontloading the ~70,000 crore it promised to invest in state-owned banks this year; announced online tracking of various kinds of retail loans, achieving some sort of a synergy between state-owned banks and Non-Banking Financial Companies (NBFCs) to improve credit supply; and allowed Aadhar based KYC Norms for several financial sector activities. It also said it would expedite Goods and Services Tax (GST) refunds, streamline ongoing tax disputes and resolve them in a time-bound manner, and clear pending contract payments to private companies by government and other state-owned firms. These measures are expected to provide both capital and liquidity.

The measures to boost demand were primarily focused on the auto sector. Carmakers have been allowed an extra 15 percentage point depreciation until March 2020 on unsold inventories. This will encourage them against drastic cuts in production. The government has also announced an unfreezing of car purchases for its departments. The government also allayed fears that it could ban the sale of internal combustion engine (petrol and diesel) vehicles, or tax them more, as it promotes electric vehicles.

The measures to boost business sentiment are welcome. A well-functioning market economy should focus on achieving compliance through systemic reforms rather than by encouraging the tax department to vilify and persecute businesses and businesspeople. This is even more important at a time when movement of capital across national boundaries is easy; any perception of a regime being anti-business could trigger capital flight.

Stock markets seem to have pre-empted the decision to roll back the capital gains tax and closed 0.6% higher than their opening mark on 23 August itself. They gained even more when they opened on 26 August. Still, while announcements to boost investor sentiment will have a limited positive impact by assuaging stock market sentiment and preventing a potential balance of payment crisis, if there were to be a sudden capital outflow, they won’t be of much use in boosting greenfield economic activity. Indeed, the stock markets were doing very well until the budget in July, even though the Indian economy has been losing its growth momentum for a year. An analysis of BSE S&P index returns and GDP growth shows that there’s hardly any correlation between the two. Is liquidity (availability of money, especially for businesses to invest and grow) the problem then? Some of the government’s moves — frontloading the recapitalization of banks, for instance — seem to suggest so. But Reserve Bank of India (RBI) governor Shaktikanta Das suggested otherwise in the latest monetary policy committee meeting held last month, when he said that “liquidity in the system has been in surplus since June 2019”. If there is no shortage of liquidity in the Indian economy and the economic slowdown seems to be worsening, then steps to boost liquidity are unlikely to address the problem.

Steps such as time-bound GST refunds and expediting payment for government contracts are healthy governance practices. However, to believe that they will give a boost to growth suggests that the lack of working capital, which was stuck with the government, has been holding back production in the Indian economy. That doesn’t seem to be the case. If enterprises were not able to meet orders or demand due to working capital being stuck with the government, it would have resulted in a scarcity in the market and triggered high inflation. That hasn’t happened. Core inflation, or non-food, non-fuel inflation, has actually been falling for almost a year. To be sure, overall retail inflation has gone up marginally due to an increase in urban food prices, but it is still below 4% -- the central bank’s comfort level. Neither of these suggests an inability on the part of producers to meet existing market demand. 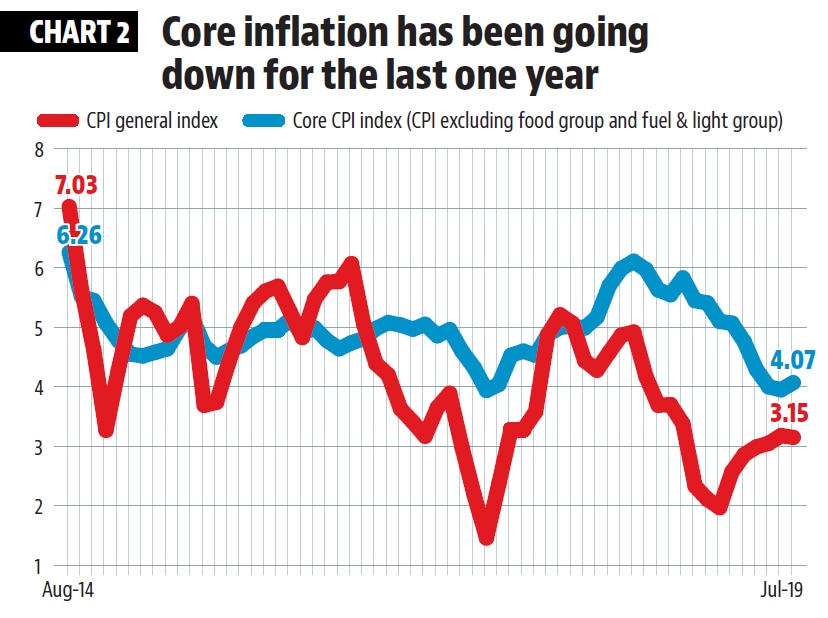 As for expediting GST refunds, this may actually end up increasing the government’s problems. If there is an element of truth to the claim that some part of the stated GST collections is what should be refunded to taxpayers, then the reported numbers are clearly inflated. The government faced a shortfall of ~1 lakh crore in GST collections in the previous fiscal year. Things could get even worse on the fiscal front if these GST collections included some amount of unpaid refunds. If the amount isn’t significant, then it won’t matter anyway. Still, streamlining this process is welcome – it’s just that it may not have the desired economic impact.

This leaves the measures to boost demand. Attempts to clear policy uncertainty facing sale of petrol and diesel vehicles are welcome, but the government buying cars or hiking permissible depreciation is not going to, on its own, solve the demand problem for either carmakers or the rest of the economy.

Growth is a function of consumption, investment, government demand, and net exports. Growing credit and improving business sentiment work almost exclusively at the level of investment. They do nothing for private consumption, government consumption or exports. Indeed, these three should grow to justify the investment.

A slowdown in global growth has adversely affected export demand, and given ongoing trade wars, the situation looks unlikely to change. There is a limit to what the government can do to boost consumption demand, unless it decides to deviate from its emphasis on fiscal consolidation (there are many, including some respected economists who believe it should). This leaves the question of private consumption demand, which has been the mainstay of economic growth in India. Private final consumption expenditure growth slowed to 3% in the June quarter. Why did this happen?

The government’s own policies may be to blame. A sharp fall in food inflation under the present government has shifted the terms of trade against agriculture. This may have created a big squeeze on farm incomes. Aggressive attempts to formalise the economy through policies such as demonetisation and GST may have simultaneously dealt a blow to the demand generated by unaccounted incomes in the Indian economy. Meanwhile, household savings have been coming down in the recent period, which suggests that either income levels are falling or people are dipping into savings to finance their consumption.

Such circumstances call for drastic measures that are different from what the government has announced. This is because the government does not seem to believe that the roots of the current slowdown lie in deficient demand. By now, there is ample evidence that demand is the problem. One such is a comparison of annual growth in domestic sales of passenger cars and net share of respondents who think their non-essential spending will increase from the RBI’s consumer confidence survey. Since last year, the two have been going down – a clear indication that falling car sales are more a result of real or perceived concerns about purchasing ability It is time the National Democratic Alliance realises the Indian economy is facing a problem of demand, not a scarcity of liquidity or policy uncertainty. As John Maynard Keynes, the greatest economist of the 20th century, wrote in his path-breaking work The General Theory of Employment, Interest and Money : “It may well be that the classical theory (of economics) represents the way in which we should like our economy to behave. But to assume that it actually does so is to assume our difficulties away”.