After a high-voltage campaign that saw war of words among contending parties, Telangana is set for Assembly polls on Friday with the Congress-led alliance challenging the ruling TRS, and the BJP seeking to make it a triangular contest. According to Telangana’s Chief Electoral Officer Rajat Kumar, polling will be held from 7 am to 5 pm in 106 constituencies while in 13 Left Wing Extremism affected constituencies polling will conclude at 4 pm.In the five hours of polling, 41.96% had voted in Telangana in assembly elections that could set the tone for the 2019 Lok Sabha polls.Campaigning by political parties came to an end at 5 pm on Wednesday. The assembly polls in Telangana were originally scheduled to be held simultaneously with the Lok Sabha elections next year, but the House was dissolved on September 6 as per a recommendation by the state cabinet. (Click here to follow live updates of Rajasthan assembly polls)It is to be seen if KCR’s gamble to opt for early elections pays off.The Congress has stitched together “Prajakutami” (People’s Front) along with the Telugu Desam Party (TDP), the Telangana Jana Samiti (TJS) and the CPI to take on the ruling TRS, led by caretaker chief minister K Chandrasekhar Rao (KCR).The TRS, seeking a second term in office, is going alone, as also the BJP.

Rajasthan has recorded an interim voter turnout of 73 % till now.

Polling ends in Telangana. Figures of final poll percentage will be announced shortly

As per the tentative estimates, the 13 constituencies recorded 65-70 % polling till the closing hours.

“Polling went on peacefully without any law and order problem. Those who are already in the queue will be allowed to cast their vote,” Director General of Police M Mahender Reddy said.

Polling comes to an end at 4 pm in 13 constituencies which were identified as sensitive in view of their proximity to Maoist-affected areas in the borders of Maharashtra and Chhattisgarh.

With hundreds of people from Hyderabad heading to their native places to cast their votes in the Telangana Assembly elections on Friday, the state government decided to exempt them from toll tax.

Will come back to power with huge majority: KCR

TRS president K Chandrasekhar Rao Friday exuded confidence that his party would come back to power in Telangana with a “huge majority.” There is a “very, very positive” mood among voters towards the party, KCR, as Rao is popularly known as, told reporters at his native village Chintamadaka where he cast his vote in the Assembly polls. 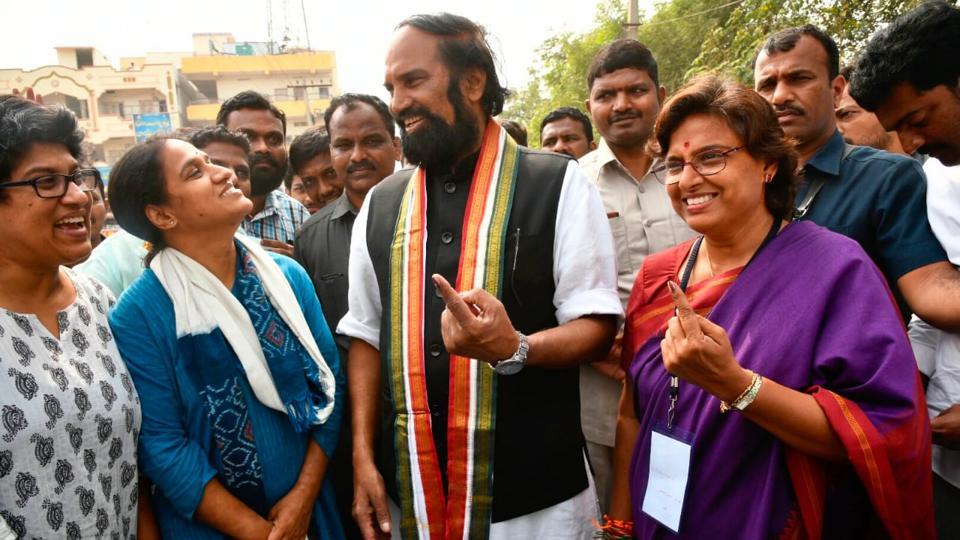 BJP MP Bandaru Dattatreya casts his vote at booth no.229 in Ramnagar of Musheerabad constituency in Hyderabad. 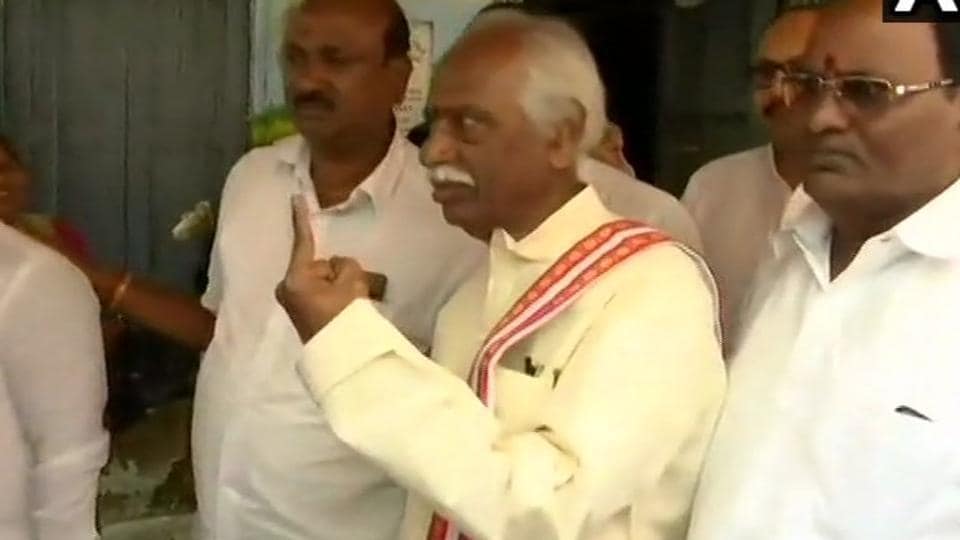 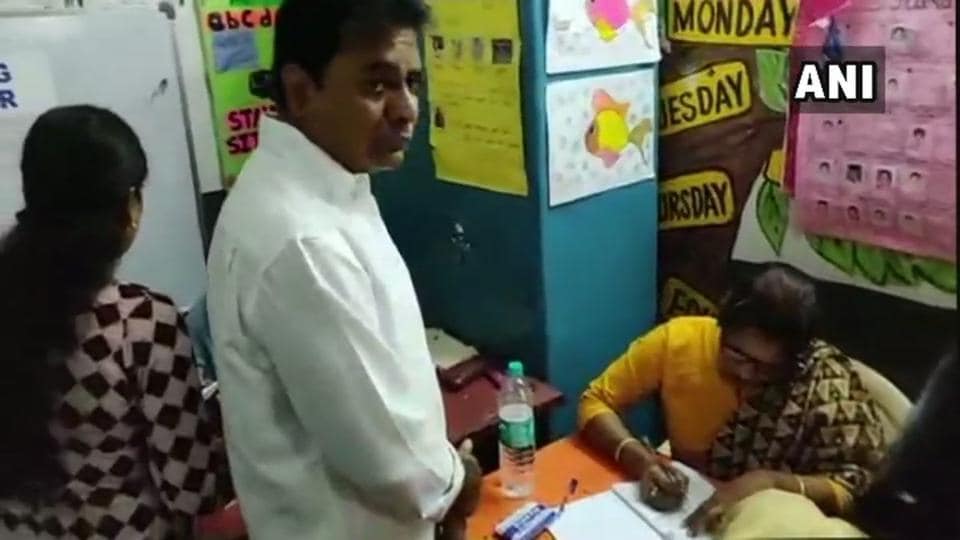 Be a part of your democracy ..
Right and duty to Vote..
🇮🇳 pic.twitter.com/Gix011IVgZ

Vote, a weapon to fight against system: Former Maoist ideologue

Former Maoist ideologue and balladeer 70-year-old Gaddar cast his vote in Alwal for the first time in his life. He registered himself as voter in April last. He now says that vote is also a weapon to fight against the system. 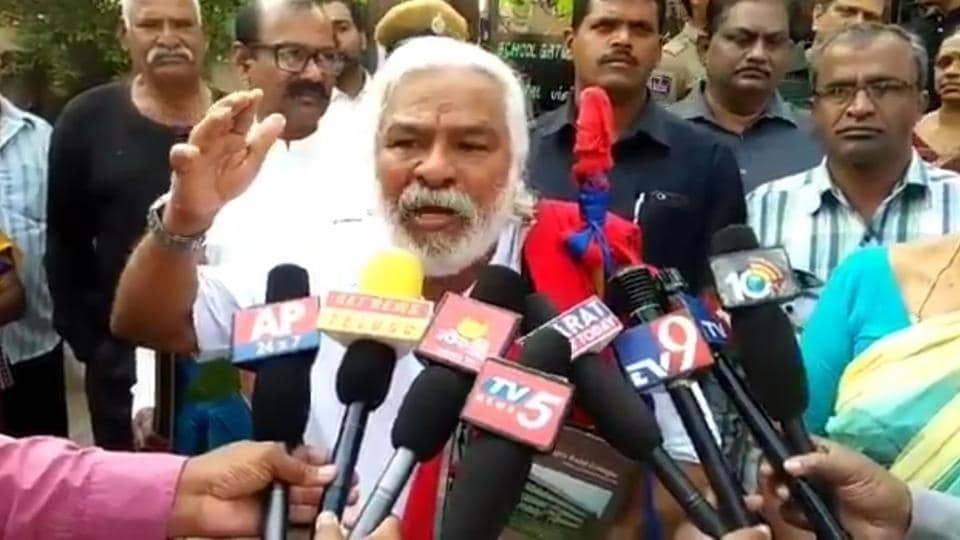 A 60-year old man Perumandla Swamy died of heart attack while standing in the queue for casting his vote at a polling station in Paidipalli village of Warangal district. 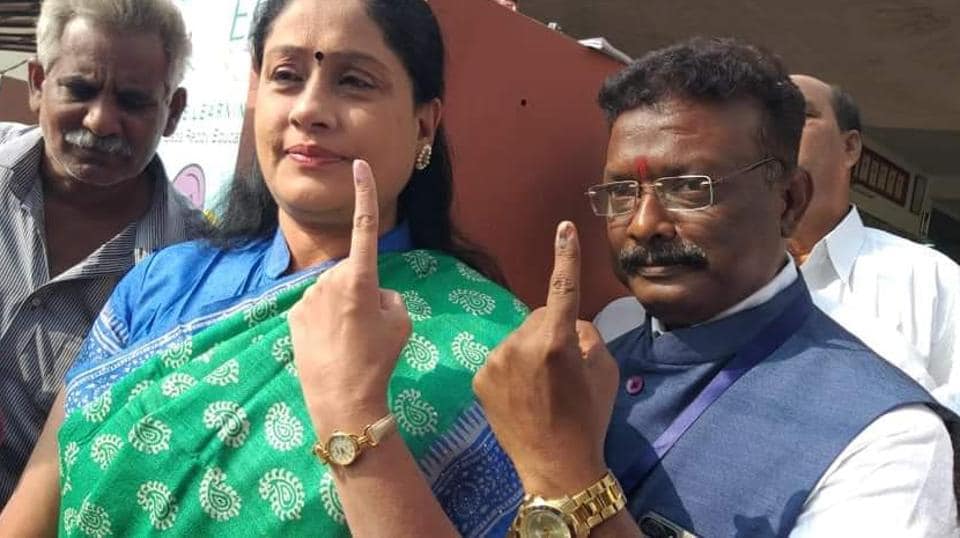 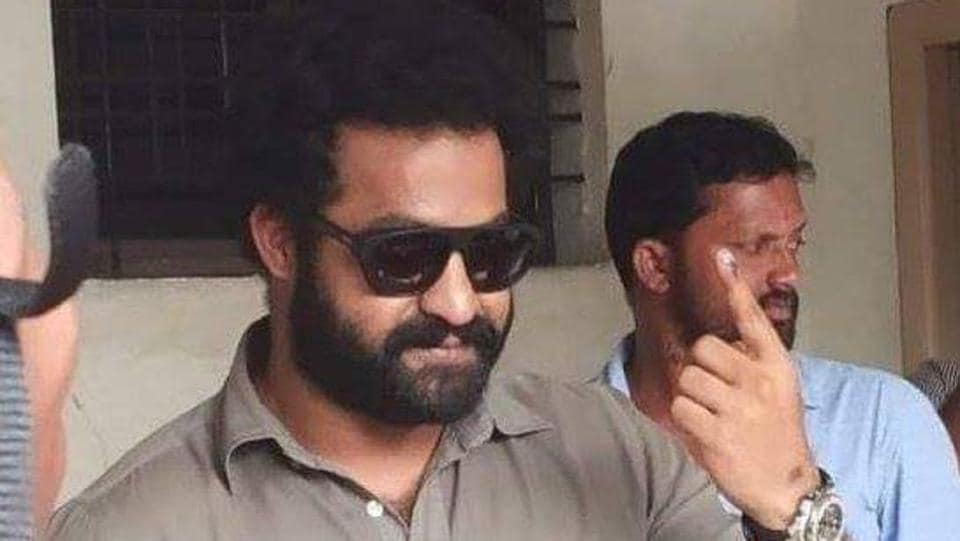 Voter turnout in Telangana till 10 am stood at 11%. 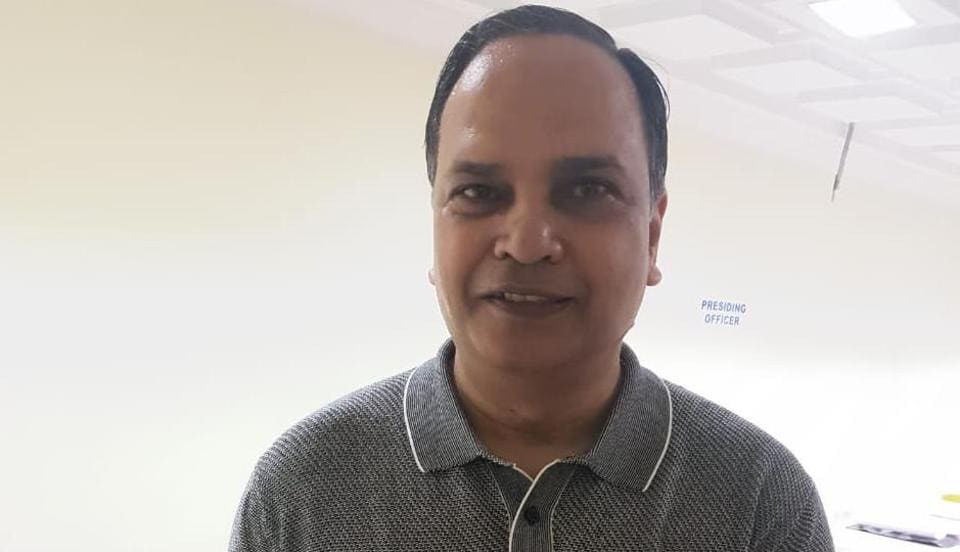 TRS MP K Kavitha stood in a queue to cast her vote at polling booth no. 177 in Pothangal, Nizamabad. 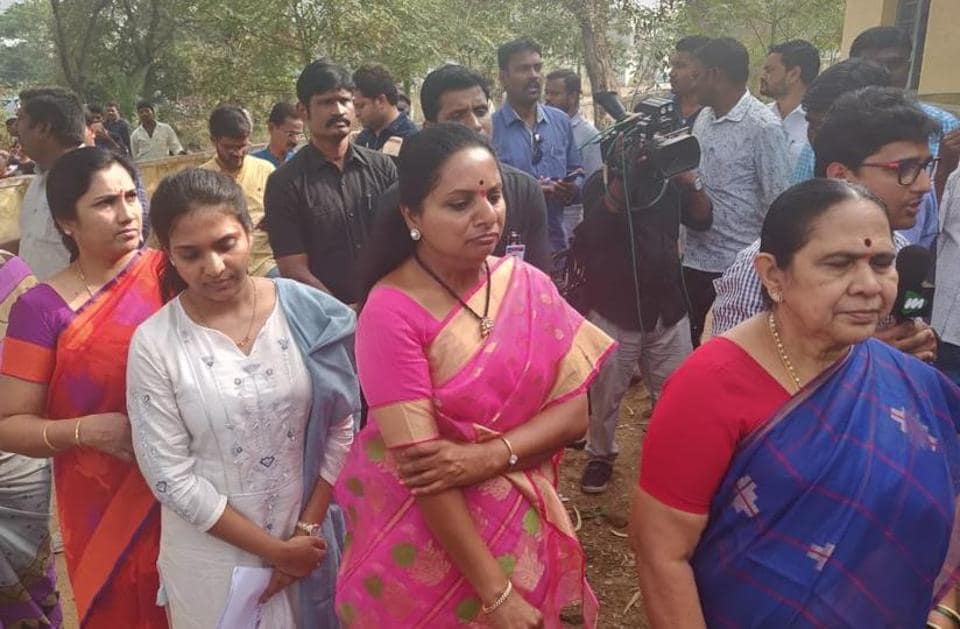 Actor Chiranjeevi in queue at polling booth in Hyderabad

Actor Chiranjeevi stood in a queue to cast his vote at polling booth no. 148 in Jubilee Hills, Hyderabad. 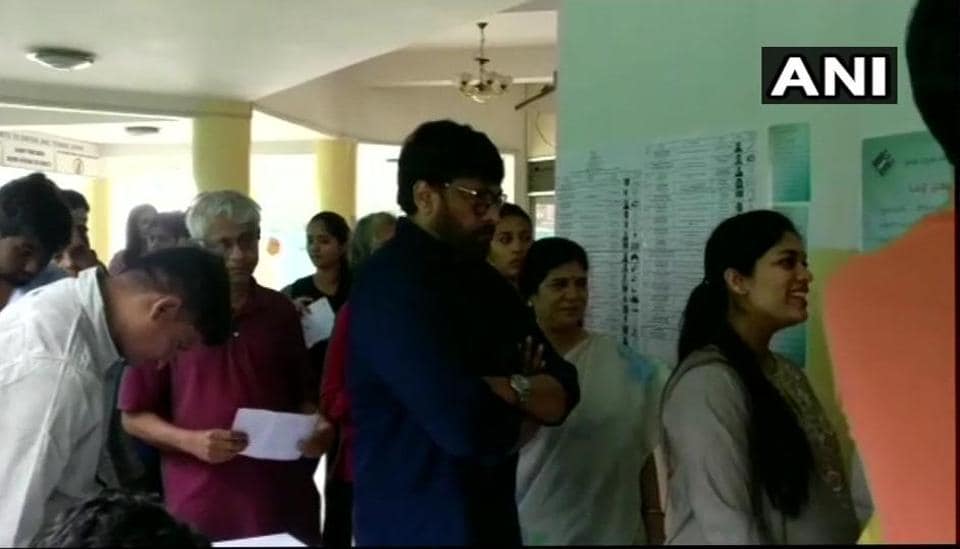 Badminton player Jwala Gutta took to Twitter and said that her name disappeared from the voters list after she had checked it online.

“I checked my name online 2-3 weeks ago, my mother’s and my names were there, my father’s and my sister’s were missing. Today we went to cast vote but my name was also missing. I don’t understand this happened. I’ve been living here for 12 years,” said Jwala Gutta, according to ANI.

Surprised to see my name disappear from the voting list after checking online!! #whereismyvote

“It is the day of polling in Rajasthan today. I request all the voters of the state to take part in this celebration of democracy with full excitement and cast votes in large numbers,” Prime Minister Narendra Modi tweeted. 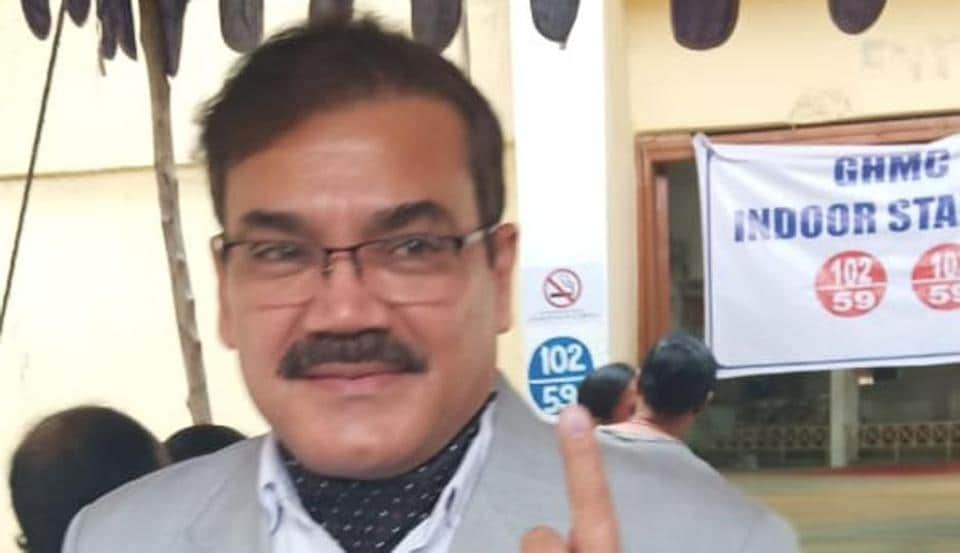 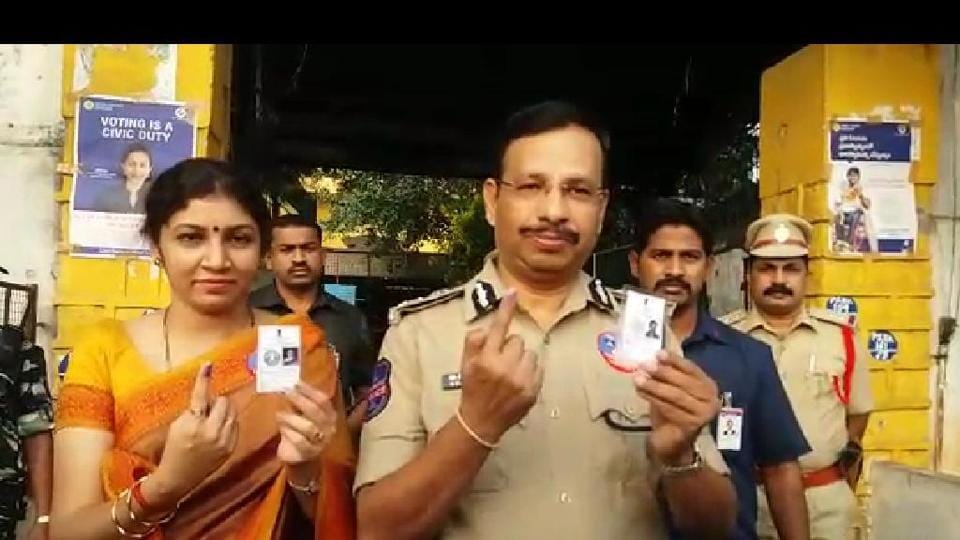 At one of the polling stations at Hayathnagar in Ranga Reddy district, voters were sent back as polling could not be commences due to malfunctioning of EVMs. 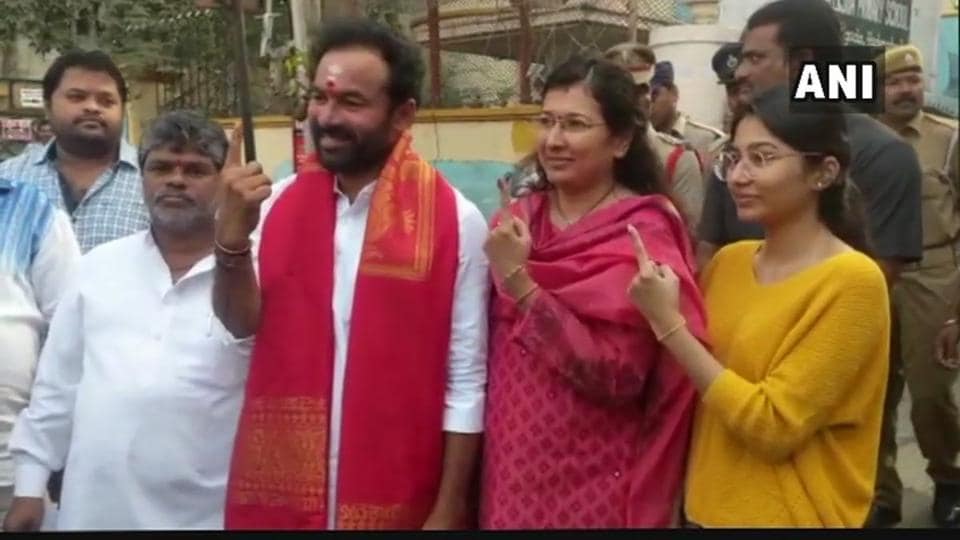 Andhra Pradesh government declared a holiday for secretariat employees and those attached to heads of departments who shifted from Hyderabad to Amaravati after capital location to participate in Telangana polls.

Over 3,000 employees are expected to exercise their franchise.

Former minister and Bahujan Left Front candidate Mothkupalli Narsimhulu from Alair constituency suffered a heart attack, and has been shifted to Hyderabad after initial treatment at Bhongir government hospital.

Polling begins at Kodangal late by an hour

Due to technical glitch polling in Kodangal booth began an hour late.

Telangana: Actor Allu Arjun stands in a queue to cast his vote at booth no. 152 in Jubilee Hills, Hyderabad. #TelanganaElections2018 pic.twitter.com/5kuui5v5Wy

Actor Akkineni Nagarjuna and his wife actor Amala Akkineni stand in a queue to cast their votes at booth no. 151 in Jubilee Hills, Hyderabad.

Telangana: Actor Akkineni Nagarjuna and his wife & actor Amala Akkineni stand in a queue to cast their votes at booth no. 151 in Jubilee Hills, Hyderabad. #TelanganaElections2018 pic.twitter.com/IZpOhBmyTU

Over 1.50 lakh polling officials on duty

Over 2.80 crore electorate are eligible to exercise their franchise in the state, which has a total of 32,815 polling stations. More than 1.50 lakh polling officials, including reserve staff, are on duty.

As polling begins, voters have formed queues outside polling station in Warangal. 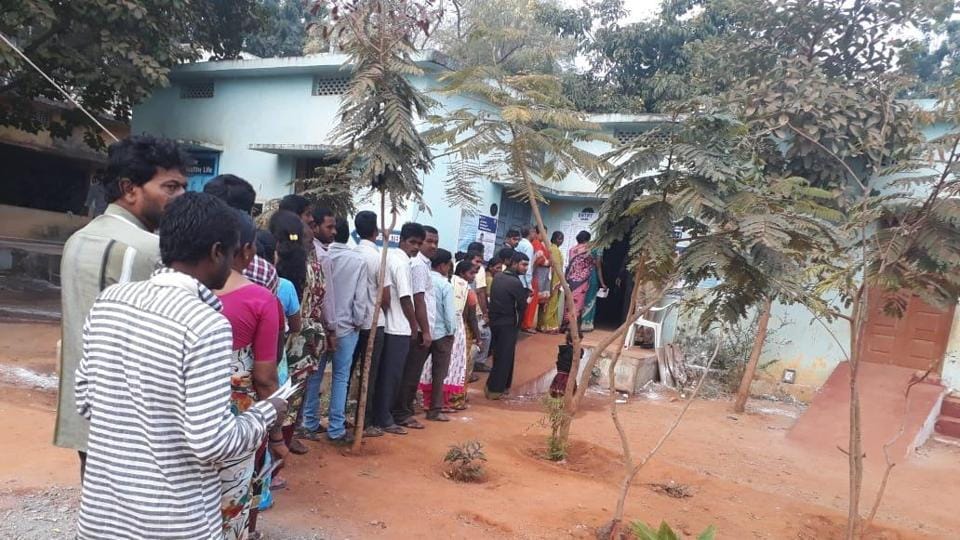 Polling yet to commence in Kodangal due to technical problems

In Kodangal, from where Telangana PCC chief A Revanth Reddy is contesting, polling is yet to commence due to technical problems.

“Voting is yet to begin at the polling station at GHMC Indoor Stadium, Amberpet due to a technical problem. Voting in the state began at 7 am today.

People queue outside a polling station in Jubilee Hills, Hyderabad to cast their votes. 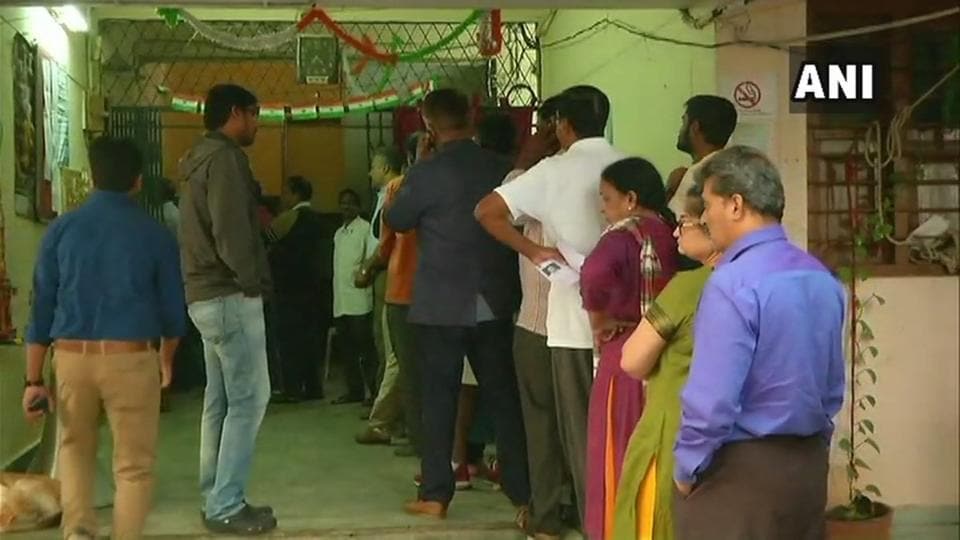 People outside a polling station in Hyderabad ( ANI Photo )
7:21 am IST 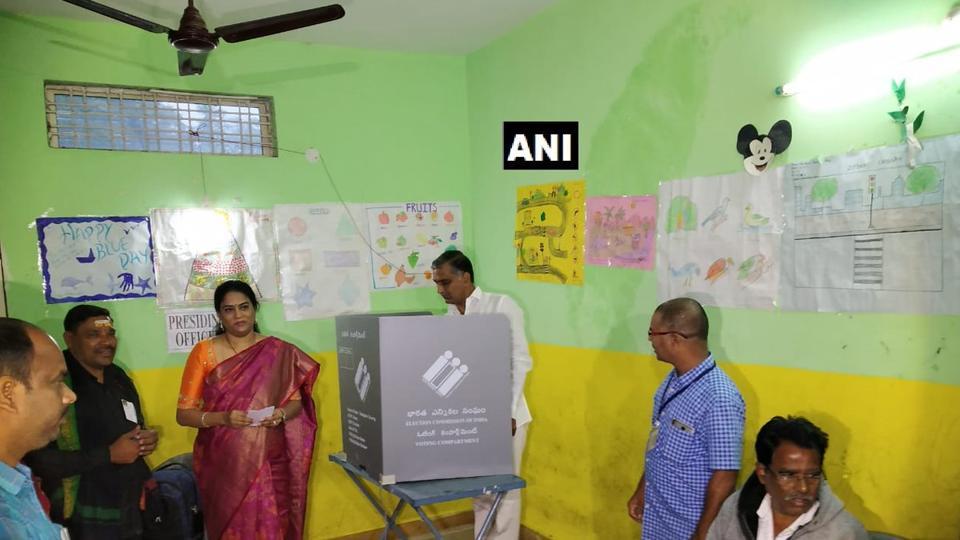 In all, 1,821 candidates of different political parties are in fray along with a few independents. Malkajgiri constituency has the highest number of 42 contestants and Banswada the least, 6.

As polling begins in Telangana, 32,815 polling stations have been set up for the people to cast their vote.

Polling officers are conducting mock polling for agents of contestants to demonstrate functioning of EVMs.

Voters form queues outside a polling station in Pothangal

Voting to begin shortly in Telangana

#TelanganaElections2018: #Visuals from a polling booth in Siddipet; voting will start at 7 am pic.twitter.com/HbEzQspQWK

Telangana Chief Minister and TRS President K. Chandrashekhar Rao, his 14 cabinet colleagues including a son and a nephew and state presidents of the Congress and the BJP are among 1,821 candidates in the fray for Telangana Assembly elections.

Huge sums of unaccounted cash and illegal liquor and other goods were seized since the Model Code of Conduct came into effect on September 27.

As per the last count, the total seizures stood at nearly ₹135 crore including unaccounted cash, illegal liquor and other goods, Rajat Kumar said adding that the total seizures was 90 per cent more than that of during 2014 polls.

For the first time, VVPAT to be used in Telangana

As many as 1,821 candidates including a transgender are in the fray in the election.

Tight security in Telangana for a smooth election

Additional DG ( Law and order) Jitender told PTI that about one lakh police personnel including 25,000 central paramilitary forces and 20,000 from other states are engaged in poll duties.

A senior police official said security was beefed up at bordering areas which were identified as Left Wing Extremist-affected regions.

Over 2.80 crore electorate are eligible to exercise their franchise in the State, which has a total of 32,815 polling stations across.