ADVERTISEMENT
Home / Bollywood / Alia Bhatt wishes Neetu Singh on her birthday with cuddly new pic but where is Ranbir Kapoor?

Alia Bhatt wishes Neetu Singh on her birthday with cuddly new pic but where is Ranbir Kapoor?

Alia Bhatt has shared a picture and a special message for boyfriend Ranbir Singh’s mother Neetu Singh on her birthday. Check it out:

Alia shared a picture of the two posing together and wrote a message for her: “Happy happy birthday to the most beautiful soul @neetu54!! May you have the best day full of love, laughter and CAKE. Sending you the biggest and tightest hug possible.” 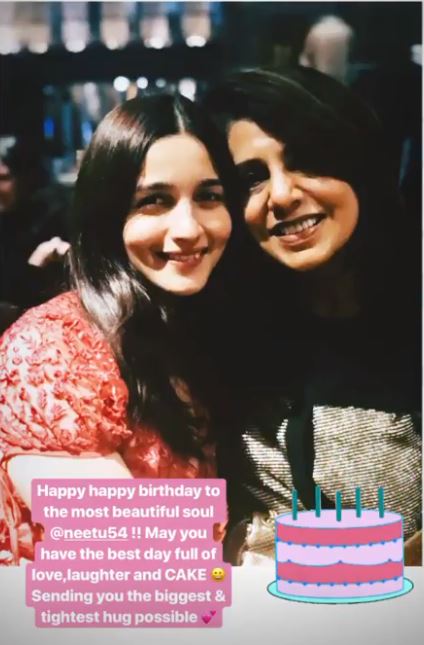 Neetu is currently in New York with husband Rishi Kapoor where he is receiving treatment for cancer since September last year. The couple is often visited by Ranbir, Alia and daughter Riddhima Kapoor Sahni. Over the past few months, several celebrities including Vicky Kaushal, Boman Irani, Deepika Padukone, Aamir Khan, Alia Bhatt, Anupam Kher, Priyanka Chopra, Sonali Bendre, Javed Akhtar, among others have paid a visit to the veteran actor.

Rishi had previously said that both he and Neetu approve of Alia’s relationship with Ranbir. Neetu oftens shares picture of Alia with the whole family whenever she visits them in New York. She recently shared one featuring herself, Rishi, Ranbir, Riddhima and Alia after a dinner with Abhishek Bachchan, Aishwarya Rai and their daughter Aaradhya.

Alia and Ranbir will soon be seen together on the big screen for the first time in Ayan Mukherji’s Brahmastra. The film is a fantasy epic told in three parts. The first part will release next year and also stars Amitabh Bachchan and Mouni Roy.

Apart from this, Alia will also begin shooting for her father Mahesh Bhatt’s Sadak 2, Sanjay Leela Bhansali’s Inshallah with Salman Khan and later, Karan Johar’s Takht with Ranveer Singh, Kareena Kapoor, Vicky Kaushal and others. She was last seen in Kalank with Varun Dhawan, which failed to perform at the box office.

Kangana Ranaut gets into an argument with journalists at Judgemental Hai Kya song launch. Watch video