Anushka Sharma shares post on ‘false appearances’. Is it aimed at Rohit Sharma and his rumoured fallout with Virat Kohli?

Anushka Sharma’s latest post on Instagram is making fans wonder if it is aimed at Rohit Sharma after his rumoured fallout with her husband Virat Kohli.
READ FULL STORY
Hindustan Times, New Delhi | By HT Correspondent

Actor Anushka Sharma appears to have wedged her foot into the rumoured tiff between her cricketer husband Virat Kohli and his team mate Rohit Sharma. If her Instagram stories offer any hint, she, too, appears to have been hurt by the fallout and ‘false appearances’.

Anushka shared a quote on Instagram stories on Thursday. “A wise man once said nothing,’ it read. Anushka added, “Only truth can shake hands with silence in a mess of false appearances.’ 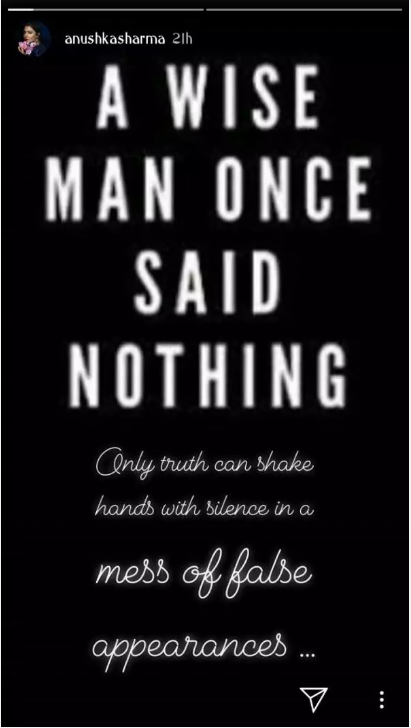 Rumours about a rift have been in news ever since Team India failed to win the recent ICC World Cup 2019 in England. From talks of issues between the senior players to rumours that some senior members of the team were not happy with one cricketer breaking the ‘family clause’, there have been stories making headlines every other day since July 9 when India lost to New Zealand in the semifinals.

Supreme Court-appointed Committee of Administrators (CoA) said that the matter will not be taken into consideration unless the same is brought to them by the players themselves. Neither Rohit, nor Virat have said anything on the matter.

Even Rohit’s social media activity has added fuel to fire. The 32-year-old, who has not been following Virat for quite some time now, has apparently “unfollowed” Anushka on Instagram. However, Virat still follows Rohit but not his wife Ritika Sajdeh.

Anushka follows neither Rohit, nor his wife and Ritika doesn’t follow Anushka or Virat.There have been reports that there are two lobbies within the Indian dressing room -- one of Kohli and the other of Rohit.