PC to rescue after Parineeta sprained her ankle

Not that she was ever unpopular. But Priyanka Chopra is making a huge effort to appease her enemies in Bollywood. While wooing Salman Khan and his entire family, and that includes Helen Aunty, Priyanka is now making all efforts to be in Karan Johar's good books.

Not that she was ever unpopular. But Priyanka Chopra is making a huge effort to appease her enemies in Bollywood. While wooing Salman Khan and his entire family, and that includes Helen Aunty, Priyanka is now making all efforts to be in Karan Johar's good books. On Monday night at Shabana Azmi's

fashion show at the Grand Hyatt which was nearly wash-out before the stars descended on the crowds and decided to eclipse the clouds, Priyanka hung around with Karan Johar non-stop.

Priyanka is also actively supporting her cousin Parineeti Chopra. Apparently, the younger Chopra star sprained her ankle just minutes before she was to walk the ramp.

Says the source, "Parineeti somehow went through the act, and then collapsed backstage. Priyanka rushed with Karan Johar to her side, attended to her ankle made sure she was comfortable. It was an amazing visual of sisterly concern."

To cheer the ramp walkers there was Shabana's buddy Urmila Matondkar, and many others. Those who finally walked the ramp in spite of the torrential rains included Priyanka Chopra, Sonakshi Sinha, Imran Khan, Chitrangda Singh, Prabhu Deva (who did a jig on the ramp), Prateik, Kalki Koechlin, Parineeti Chopra (in spite of the badly sprained ankle) and Arjun Kapoor. 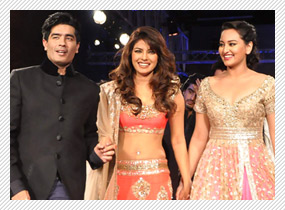 There were three debutants on the ramp at the show. Clearly they were the scenestealers of the evening.

Says an onlooker at the show, "When Mary Kom walked into the lounge where all the stars had assembled before the show, everyone gave her a standing ovation. She blushed and carried herself like true star on the ramp"

The second debutante on the ramp was Neeta Ambani who was most reluctant to do the needful. She had never walked the stage before but was persuaded by Shabana who requested Mukesh Ambani to do

, which he did wholeheartedly and enthusiastically.

On the ramp the little scene stealer said, "My

Kaifi Azmi taught me that girls are equal to boys. My brother Viraj is still to learn the lesson but I am trying to teach him!"

There were many Kodak moments on the ramp. And one of them eventuated when Prabhu Deva met Mary Kom backstage. Apparently the two have a mutual admiration society going. Though they had never met before, there was instant camaraderie between them.

Prankster of the evening was Prateik. Prateik kept platefuls of fries in front of Dia Mirza, Shahana Goswani, Kalki Koechlin and Shazahn Padamsee to tempt them. Even though the girls were ravenous they ate only fruit looking heartbrokenly at the fries.

Shabana jubilantly said after the show, "Thankfully it went all right eventually, in spite of the rains. We started very late. But the house was 80 percent full. Many of my friends who were supposed to be part of the audience couldn't make it."