The capital’s air quality index was recorded at 312. The last time the air was this bad was between February 10-12, according to the Central Pollution Control Board (CPCB) AQI bulletin.
READ FULL STORY
Hindustan Times, New Delhi | By Soumya Pillai

Delhi’s air plunged into the ‘very poor’ zone for the first time this year since February on Thursday, the day when the winter segment of the Supreme Court-approved Graded Response Action Plan (Grap) — a set of anti-pollution restrictions that include pre-emptive measures to stop the air quality from deteriorating to emergency levels — kicked in.

The capital’s air quality index was recorded at 312. The last time the air was this bad was between February 10-12, according to the Central Pollution Control Board (CPCB) AQI bulletin. Air is categorised as very poor when the ambient PM2.5 or PM10 concentration value is between 121-250µg/m3 or 351-430 µg/m3 respectively. According to the CPCB, prolonged exposure to very poor air may cause respiratory illnesses.

Also Read| Delhi pollution: What AAP government has done so far in 2020

At 7am, the hourly average AQI of the city was recorded 308. As the day progressed, the levels increased and touched 320 at 11am. After noon, the air quality started showing marginal improvement, before it settled at 312 in the 4pm bulletin of the CPCB. 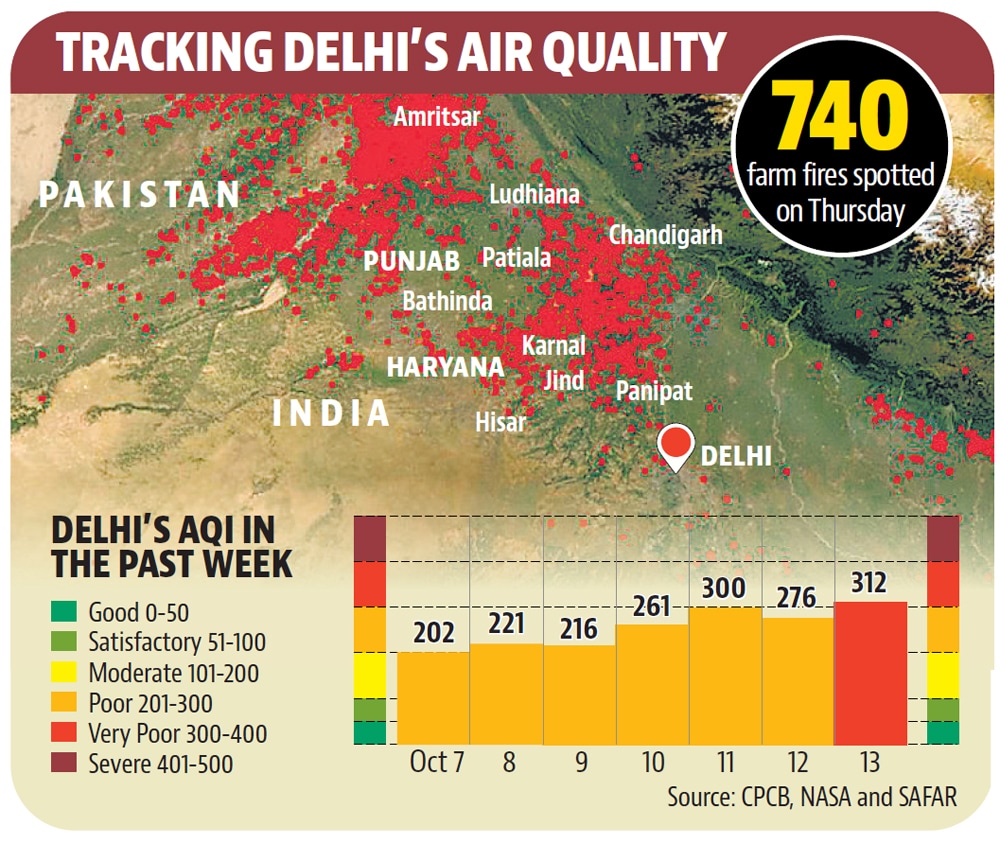 Kuldeep Srivastava, head of IMD’s regional weather forecasting centre, said that from Wednesday night to early Thursday morning, the winds over Delhi were calm, but it picked up around 9am. The impact of this improvement in wind speed was seen on the air quality by noon.

“While Delhi received wind speed ranging from 6-8kmph through most of the day, this wind was northwesterly, coming from the states of Punjab and Haryana. This means that the impact of stubble burning activities here was more on Thursday. This caused the air quality to slip into the very poor zone,” Srivastava said.

Wind speed picked up again in the evening, bringing down the AQI to 297 at 8pm, according to the data posed on CPCB’s Sameer app.

Data from System of Air Quality and Weather Forecasting and Research (Safar), the air quality monitoring centre of Union ministry of earth sciences, also showed that the major reason behind Delhi’s foul air on Thursday was crop residue burning in Punjab and Haryana. Data showed that on Wednesday, 740 such fire counts were recorded from the neighbouring states.

As per the Safar forecast, there will be no significant respite in the pollution levels in the coming days.

“The conditions are likely to be similar in the coming three to four days. The only breather is that the wind direction is expected to change from north-westerly to south-easterly and easterly from tomorrow (Friday), which will somewhat reduce the pollutant load because of stubble burning,” Srivastava said.

Delhi chief minister Arvind Kejriwal said stubble is causing huge pollution across north India. “Let’s accept that stubble burning causes huge pollution every year in north India during this time. And let’s all get together to find a solution sincerely. Blame game and politics hasn’t helped anyone. People are suffering. I’m extremely worried that pollution will play havoc coupled with Covid-19.”

Environment experts said the only solution to controlling pollution in Delhi which spikes to hazardous levels every winter in the national capital is a “coordinated” effort.

“Winter action plan is an emergency plan, this is basically a result of all the work that is done to control pollution levels throughout the year. The way forward to control the pollution levels in Delhi has to be with all the agencies coming together with a common purpose. This winter, the biggest challenge that Delhi is likely to face is to control waste dumping and burning and vehicular pollution. Considering the limitations of public transport modes under the Covid-19 scenario, the government needs to find ways to control private trips,” said Anumita Roychowdhury, executive director (research and advocacy), Centre for Science and Environment.