While the base fee will be revised every year, the civic agencies have been asked to determine the rates for its surface and off-site parking lots in multiples of the BPF.

Parking illegally in public spaces or using on-street parking for more than an hour is going to cost Delhi residents dearly as the Delhi government notified the long-delayed ‘Delhi Maintenance and Management of Parking Places Rules, 2019’ on Wednesday.

According to the policy, first ideated by Lieutenant Governor Anil Baijal in 2017, parking fees in most parking lots across the city is going to be hiked soon, the minimum rate of which will be fixed by a special committee, ‘Base Parking Fee (BPF) Committee’, that will be headed by the commissioner (transport). Short duration parking (up to one hour) will be encouraged, while fee for parking for long hours would increase exponentially.

While the base fee will be revised every year, the civic agencies have been asked to determine the rates for its surface and off-site parking lots in multiples of the BPF. 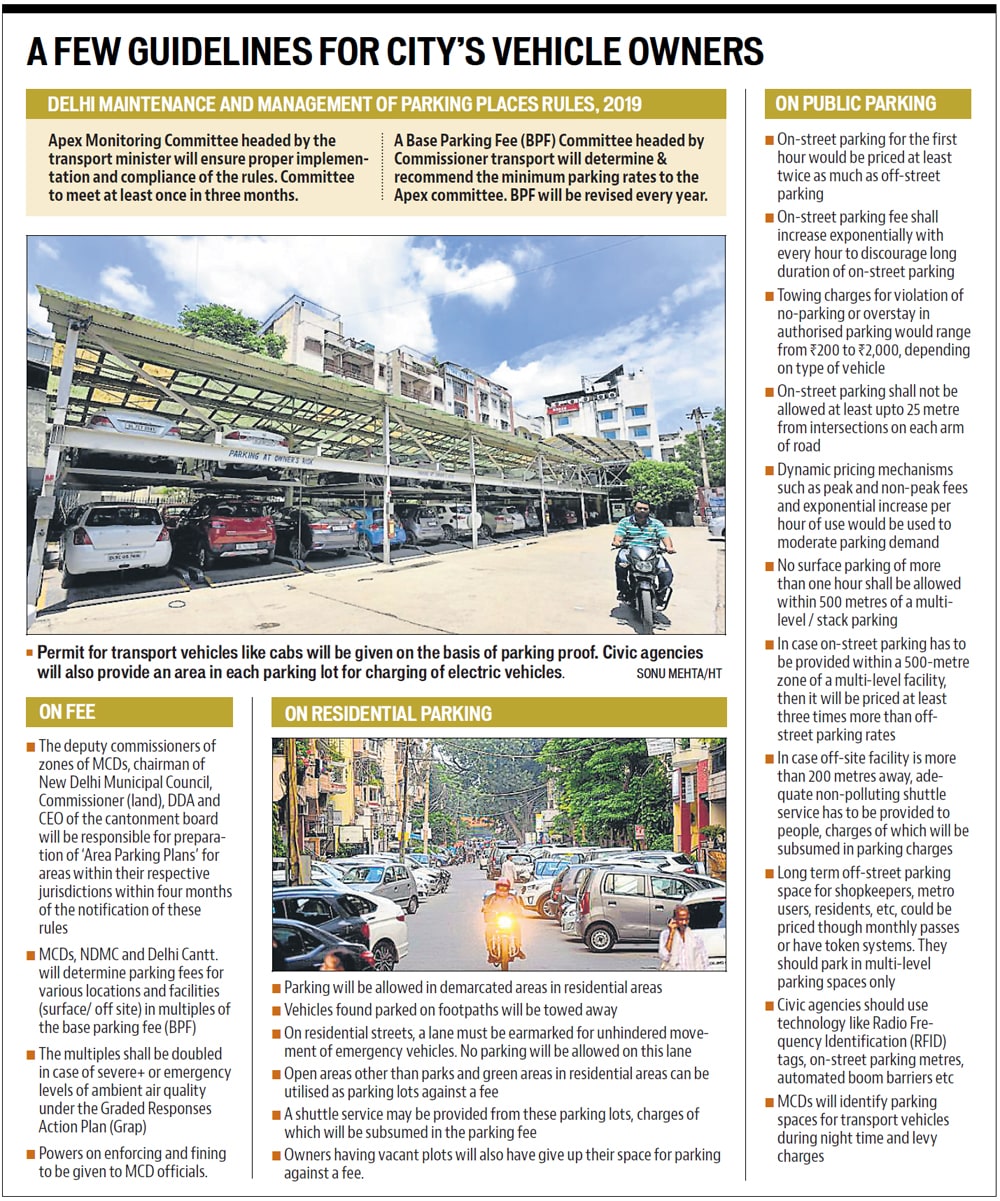 “On-street parking would be priced at least twice as much as off-street parking under the new rules. Also, it will be the first time that Delhi will have a dynamic pricing mechanism such as peak and non-peak fees. The policy clearly states that the longer you use on-street parking, the price is going to be much higher than what one pays now,” a government official said.

Transport minister Kailash Gahlot said the policy is a one-of-a-kind initiative in the country. “The new rules will put an end to haphazard parking in the city, much of which is leading to traffic congestion and even fights that sometimes have ended up in fatalities as well. Now, a lot will depend on the civic agencies as they are the ones who have to enforce it,” he said.

Experts said this notification will “finally” provide a strong legal backup to the implementation of parking area management plans across the city. Under the plan, all civic agencies and the Delhi Development Authority (DDA) will now have to submit parking area plans within four months, in which they have to identify and demarcate parking spaces keeping in mind pedestrians and way for emergency vehicles.

She, however, said that removing the clause of imposing a fee for parking in residential areas needed to be kept in the policy. “As its implementation picks up, the excluded rules on city-wide pricing must be brought back for the effective impact,” Roy Chowdhury said.

Under the rules, towing charges for violation of no-parking or overstay in authorised parking would range from ₹200 to ₹2,000, depending on the type of vehicle. It also states that the civic agencies should use the parking revenue for local development works related to pedestrian safety and building non-motorised vehicle lanes and more parking spaces.

Despite the rules being notified, an expert member of a high-powered committee that was set up for the policy said it would take at least four months to see the real impact of the policy. “It is a misconception that parking fee in public spaces will be increased as soon as the rules are notified. Now the minimum parking rates across Delhi will be fixed by the BPF Committee. Simultaneously, the civic agencies will have to prepare fresh area parking plans. Once the BPF is set, the civic bodies will have to fix their parking rates,” the member said.

The policy was first mooted in 2017 and the final draft was ready by January 2018. Since then the policy made rounds back and forth between the transport minister and various departments. First, for more than a year since 2018, the file kept moving between the law department, transport department and the minister’s office over a disagreement on whether the policy should be notified in the name of the minister or the L-G. Later, after receiving complaints from a section of residents, transport Gahlot sought the removal of a clause from the policy which proposed to levy fees for parking in residential areas as well.