On April 10, India administered its 100th million doses of the Coronavirus disease (Covid-19) vaccine, a feat that was achieved in 85 days, the fastest in the world

On April 10, India administered its 100th million doses of the Coronavirus disease (Covid-19) vaccine, a feat that was achieved in 85 days, the fastest in the world. The US did this in 89 days and China in 102 days. The journey, however, has seen its fair share of ups and downs.

Prime Minister Narendra Modi launched the nationwide Covid-19 immunisation drive on January 16. From 200,000 vaccine doses that were administered on day 1, the country has seen as high as 4.3 million doses also administered in a single day last week.The aim is to target at least 5 million.

Since the day of the launch, experts in the government have been working hard on scaling up vaccinations to ensure the maximum number of vulnerable beneficiaries are covered as fast as possible.

“The government managed to scale up significantly in a short span of time, and there will be a further increase in weeks to come as we are looking at vaccinating at least 5 million beneficiaries per day. India has the requisite capacity, as under the Polio immunisation programme, the government has managed to vaccinate 170 million children in a week,” said Dr NK Arora, national task force member on Covid-19 vaccine related matters.

“The safety and efficacy of both the vaccines currently in use in the country has been well-established,” he added.

On day one, the facility was opened for all health care workers, later, on February 2, frontline workers were also eligible for the shot, and on March 1, the government opened up vaccinations for those over the age of 60 years or those above 45 with specified co-morbidities. On April 1, it opened up Covid-19 vaccination to everyone over the age of 45.

By January 3, India had approved two indigenous Covid-19 vaccines . Close to 85 countries received made-in-India vaccines in the form of grants, commercial contracts, or as part of the COVAX mechanism of WHO.

The two vaccines in use under the national Covid-19 vaccination programme are: Covaxin and Covishield. 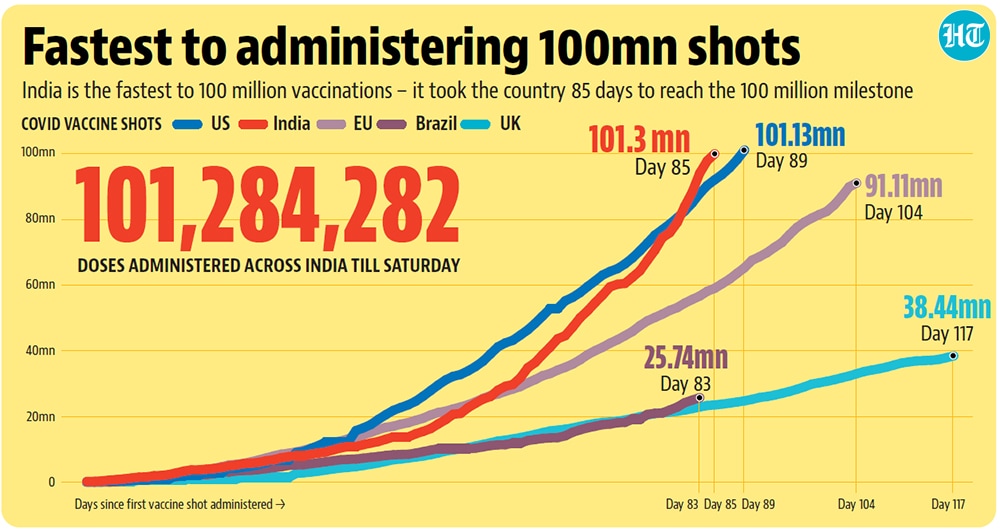 “It is one of the great achievements indeed, as it has become one of the qualifiers to be called a developed nation these days, after the race to go to space, and the race to become a nuclear power. India had managed space and nuclear programme both, and now the country has also become a vaccine superpower,” said Dr Balram Bhargava, director general, Indian Council of Medical Research (ICMR), and secretary, department of health research.

“Covaxin has been literally developed from scratch in India.”

It’s base, Dr Bhargava pointed out was “the virus strain that came from China through a medical student, and was isolated at ICMR-National Institute of Virology in Pune on March 9.”

ICMR-National Institute of Virology transferred the virus isolate to Bharat Biotech around the end of April.

Both the vaccines have been surrounded by their share of controversies. The drugs controller general of India (DCGI), Dr VG Somani, approved Covaxin for restricted use in emergency situation under the ‘clinical trial mode’ without the firm having submitted the phase 3 efficacy data, a move for which the government was criticised. Many experts, including country’s one of the top vaccinologists, Dr Gagandeep Kang, said at the time that they had never heard of this kind of approval previously.

Clinical trial mode required Bharat Biotech to administer the vaccine after taking an informed consent of the recipients, and actively follow-up all individuals who were given their jab.

“In a non-emergency situation, safety, immunogenicity and efficacy data is required. Existing pandemic situation with high mortality, available science, and a lack of definitive treatment are considered by subject expert committee for accelerated approval that is in our legal provision. In a pandemic situation restricted use is considered based on safety, and immunogenicity data while phase 3 trial is still ongoing,” explained Bhargava.

“Immunogenicity data generated through phase 2 clinical trial serves as a surrogate for efficacy, and the clinical trials rule 2019, provides for considering phase 2 results to guide approval. The subject expert committee guides the DCGI in the process of decision-making for restricted use under emergency situation,” he said.

For a few weeks, the government had to deal with vaccine hesitancy among public, especially against Covaxin because of lack of adequate data.

“Vaccine hesitancy was something that has been there in all countries; it has got nothing to do with Covid-19. Probably the degree was slightly more in Covid-19 across countries. The only way to address it was by engaging repeatedly with the beneficiary group; by trying to address all their concerns and confusions. That was our advice to all state governments,” said a senior government official who asked not to be named.

Another important step that the government took to encourage more beneficiaries to come forward was to allow walk-in vaccine registrations, and open the facility up for all individuals above 45 years of age.

“The daily vaccinations saw a sharp rise after April 1,” said one of the officials in Delhi government involved in the vaccination process.

Opening up vaccinations for general public, however, led to another problem that of vaccine eagerness, especially among the younger people.

As more people started coming forward to take the jab states started complaining of vaccine shortages, although at least some of this had to do with last mile issues.

“There is no shortage of vaccines; we have made data available publicly. It’s just some states making noise that has no substance. The entire process of procurement, distribution and consumption is being closely monitored at the highest level. The government has taken several pro-active steps to ensure people of India have access to high quality vaccines, and if you look at the number of people vaccinated at such a short span of time, it is a remarkable achievement on India’s part. Our PM has ably guided us in this entire process,” said Union health minister, Harsh Vardhan.

Government data reviewed by HT shows that there are, as of Saturday evening, close to 40 million doses with the states or in the pipeline.

Get Latest India Newsalong with Latest Newsand Top Headlinesfrom India and around the world.
SHARE THIS ARTICLE ON
Topics
coronavirus india
coronavirus india
Subscribe to our best newsletters
Subscribed to newsletter successfully
Thank you for subscribing to our Daily News Capsule newsletter.