The ongoing stand-off between the Union government and protesting farmers does not show any signs of a resolution at the moment.

The ongoing stand-off between the Union government and protesting farmers does not show any signs of a resolution at the moment. Farmers, especially in Punjab and Haryana, have been protesting against the three agriculture laws enacted by the central government. The argument is that these reforms will abolish middlemen and enhance farmers’ incomes, but farmers maintain that this is a precursor to the largescale withdrawal of government support from farming, and will only replace existing middlemen with more powerful corporate entities.

These bills essentially pave the way for a greater role for market forces and the private sector in agricultural value chains by allowing contract farming, removing restrictions on movement and storage of food items, and allowing trade in food items to take place outside government-controlled markets.

The protests have now escalated to a stage where thousands of farmers are threatening to block all road routes to the national capital. Interestingly, some aspects of the debate between the pro-farm bills and anti-farm bills groups merit clarification.

1 India is not a food-surplus country

The roots of state intervention in agriculture, from government procurement to rationing and restrictions on private traders, which is what the current reforms seek to abolish, are to be found in recurring food shortages in the period after Independence. The Green Revolution, which entailed widespread use of high yielding varieties of seeds, became successful because the state gave dual incentives – input subsidies and remunerative prices via Minimum Support Prices (MSPs) – to farmers to adopt this technology.

Many commentators believe that these incentives are not needed today because India is a food-surplus country now. The sharp rise in India’s agriculture exports is often cited as evidence of this fact. However, when read with the fact that average nutritional intakes in India are much lower than not just developed countries but even China and Vietnam, the purported food surplus seems to be the result of inadequate food consumption by the local population.

2 Most Indians don’t eat enough; they can’t afford to

Why are Indian diets poor when there is no scarcity of food? Most of them cannot afford good diets. A recent paper by Kalyani Raghunathan of the International Food Policy Research Institute and others, the findings of which were reported in these pages, found that 63.3% of people in rural India could not afford what the authors describe as the Cost of a Recommended Diet (CoRD). 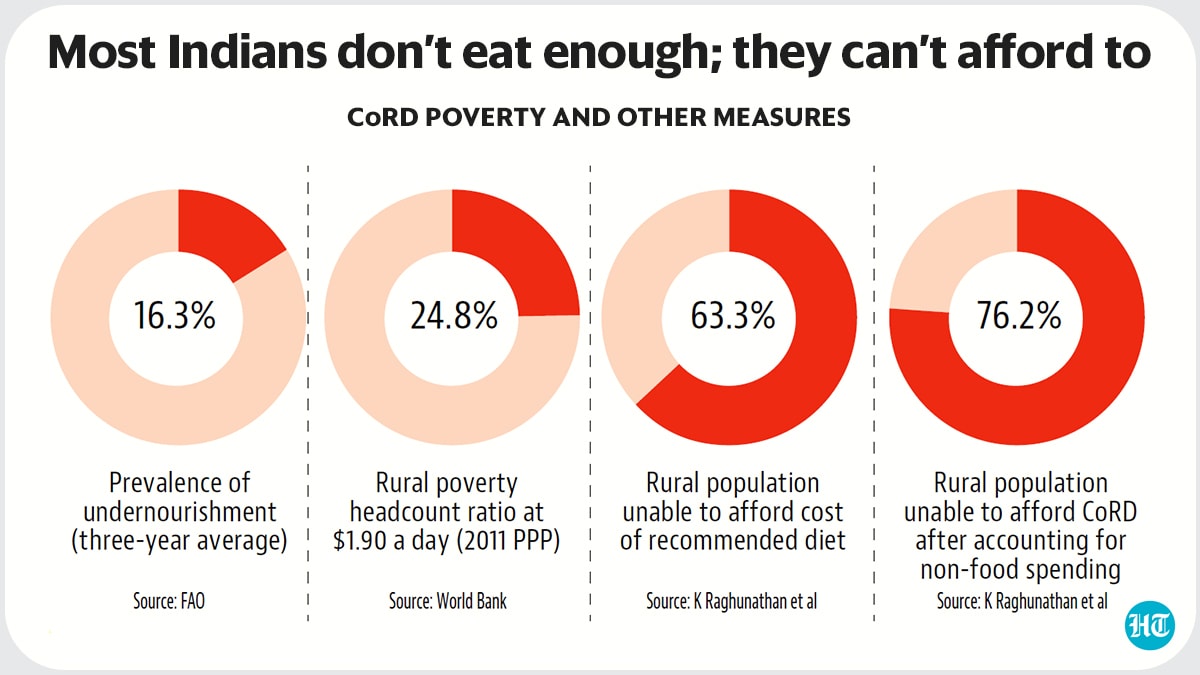 This share increases to 76.2% if one were to assume that a third of their spending would go on non-food items. CoRD has been calculated for a food basket which includes broad categories of cereals, proteins (pulses, meat, fish and eggs), dairy, fruits, vegetables, dark green leafy vegetables and oil and fats.

3 Farmers in Punjab, Haryana are better off than the rest

The farmers who are protesting outside Delhi’s borders are among the richest among their peers in India. Data from a 2013 survey carried out by the National Statistical Office (NSO) shows that farmers from Punjab and Haryana had the highest incomes in the country. A disproportional share in government procurement at MSP plays an important role in this.

In 2019-20, 65% of wheat and 30% of rice was procured from Punjab and Haryana. The share of these two states in wheat and rice production in the country was 28.7% and 15.9% in 2017-18, the latest period for which data is available for all states. States where there are no large-scale MSP operations tend to have lower prices in private markets as well. That incentivises the richer farmers to lobby for the continuation of the status quo.

The skewed nature of MSP procurement, especially for rice, has not been an unambiguous blessing for Punjab’s agriculture. The state is not in an agro-climatic zone suited for cultivation of rice, which is a water-intensive crop. Large-scale rice cultivation has resulted in farmers sinking private tube wells, which has led to a drastic depletion of ground water levels.

A 2011 Economic and Political Weekly paper by Anindita Sarkar found that richer farmers in Punjab were a bigger reason for depletion of water tables as they sank deeper tube wells everywhere including in villages which were already facing ground water problems. Because resorting to environmentally harmful farming practices promise monetary rewards in the short term, it is difficult to get the farmers to abandon them. Even the roots of the stubble burning in Punjab that chokes Delhi for a few weeks every winter can be traced back to water management.

Even though Punjab and Haryana are not as critical to the country’s food security as they were a few decades ago, they are extremely important in India’s farm economy. Decades of high farm earnings also mean that the peasantry in these two states has much more in terms of material wherewithal to fight for its interests. Therefore, the fact that the government’s attempts to undermine their interests by enacting the recent farm laws have triggered a sharp political backlash is hardly surprising. No matter what the outcome of the present conflict, the trust deficit which will result from this confrontation is likely to erode the state’s credibility to persuade the farmers to shift to more environmentally sustainable practices in the future.