Parliament Highlights: Country, not govt loses most due to House disruptions, says Modi

The row over the Assam National Register of Citizens (NRC) continued to rock both houses of Parliament on Wednesday.The Rajya Sabha had to be adjourned for the day after it was briefly adjourned minutes after it begun as chairman Venkaiah Naidu asked BJP president Amit Shah to conclude his statement on the draft NRC.Here are the highlights:

Our democracy is our biggest strength. It has been 70 years since independence, and we have showed the world that there is unity in diversity: Manipur governor Najma Heptulla, after being conferred Outstanding Parliamentarians Award for the year 2013, at Central Hall, Parliament House.

Govt has the least to lose due to Parliament disruptions: Modi

The government has the least to lose due to disruptions in Parliament and it is the country which loses the most: Prime Minister Narendra Modi, while addressing an event at the central hall of Parliament to confer the best parliamentarian awards for the years 2014 to 2017.

I am not BJP’s servant to reply to any of their statements. I didn’t say this (civil war remark), my concern is regarding the 40 lakh people whose names are not in the list (NRC). BJP is politically tensed because they know they won’t come to power in 2019: Mamata Banerjee

We discussed current politics and the possibility of all of us contesting elections together in future. We also discussed the NRC issue: Mamata Banerjee after meeting Sonia Gandhi and Rahul Gandhi

Prime Minister Narendra Modi will soon inaugurate India Post Payments Bank (IPPB) operations with 650 branches across the country, communications minister Manoj Sinha said. IPPB will have 1.55 lakh access points, of which 1.30 lakh will be in rural areas, and will work like a bank, he said in the Lok Sabha.

Today Amit Shah and Rajnath Singh were not allowed to speak in Rajya Sabha. This was a planned strategy by the opposition. Congress and TMC don’t want to let the House run: Union minister Prakash Javadekar.

The government is changing the norms for private sector participation in the modernisation of railway stations, railways minister Piyush Goyal says in Lok Sabha.

No border dispute with Myanmar: Rijiju

The government said there is no border dispute between India and Myanmar and the demarcation of nine pillars is being worked out in a complete understanding with the neighbouring country. Rejecting reports about border dispute and destroying of pillars in the Manipur region as false, minister of state for Home Kiren Rijiju said in Rajya Sabha that a high-level central team has already visited the spot and reported that there is no dispute on the issue.

Mamata dismisses talks of her being PM candidate

West Bengal chief minister Mamata Banerjee seeks to dismiss talk of her being a Prime Ministerial candidate, saying her priority was the ousting of the BJP government at the Centre for which the opposition should come together.

“I am nobody. I am a very simple worker. Let me just continue as a commoner. I want that this government must go, this BJP government. They are doing maximum political vendetta and atrocities with the people. So we want that everybody should be united. Let us work together, don’t think of Prime Ministerial candidate. Think of the country,” she told the media in Parliament House.

The three armed forces face a shortage of over 9,096 officers, with the Army topping the list, the Lok Sabha was informed today. In a written response to a question in the Lower House, minister of state for defence Subhash Bhamre said as on January 1, 2018, the authorised strength of officers in Army was 49,933, but it has 42,635 officers, which is 7,298 short of the sanctioned strength.

Only pro-Dalit party can form govt in 2019: BJP MP

BJP MP and Dalit leader Savitri Bai Phule demanded a debate in Parliament to strengthen the SC/ST Act which, she said, has been made “ineffectual” by the Supreme Court judgement and asserted that only a pro-Dalit party will form the next government at the Centre.

Bill in Lok Sabha to bring down commercial dispute value

The Lok Sabha on Wednesday took up for discussion a Bill that seeks to bring down the specified value of commercial disputes from the existing Rs 1 crore each to Rs 3 lakh for improving India’s standing in the ease of doing business.

Rajya Sabha is adjourned for the day as Trinamool Congress and other opposition members raise slogans in the Well of the House. Home minister Rajnath Singh attempts to reply to the debate but he cannot be heard as some MPs protest loudly.

Seems like conspiracy in not letting House function: Naidu

It seems a conspiracy... not letting the House function by creating controversy... You are doing something which is not acceptable in parliamentary system: Venkaiah Naidu.

TMC protests in the Well, demands PM Modi to speak

Trinamool Congress members protest in the Well of the House and demand PM Modi to speak on the Assam NRC draft list. Members are not allowing Amit Shah to speak. Chairman says the move is “unbecoming of Parliament members”.

RS adjourned to meet at 2 pm

Rajya Sabha chairman Venkaiah Naidu says statement on the Assam NRC draft will be heard after the House reassembles at 2 pm. Naidu informs a total of 12 questions were taken up during Question Hour.

Congress MP from Assam’s Silchar, Sushmita Dev, enters the Well and alleges that some Bengalis were beaten up along the Assam- Meghalaya border after the draft National Register of Citizens (NRC) was published and sought their safety.

“Bengalis are being beaten up along the Assam-Meghlaya border. We want security to 40 lakh people who were excluded from the NRC. What is the government doing? People are scared. Who will give them security,” she asks.

Is Mamata aware there are illegal immigrants in WB, asks Roopa Ganguly

Is she aware that there are a lot of illegal immigrants in West Bengal? As it is what is happening in West Bengal today, is it any less than bloodbath or civil war? Doesn't she know that every other day BJP karyakartas are being killed: Rupa Ganguly, BJP on WB CM #NRCAssam pic.twitter.com/adF4PAHwio 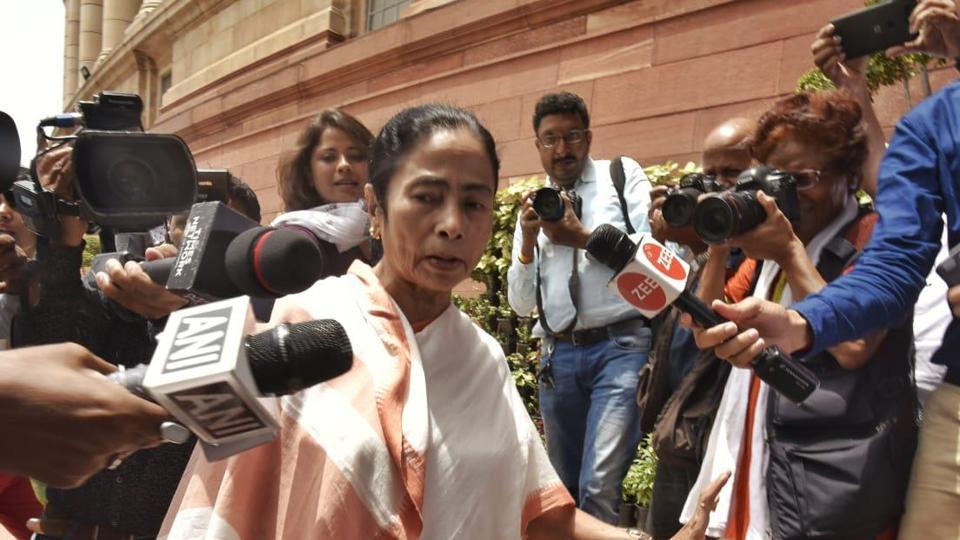 The Centre and the industry favour inclusion of petroleum products in the Goods and Services Tax (GST) but the GST Council will take a final call on it, oil minister Dharmendra Pradhan says in Rajya Sabha.

Rajya Sabha reassembles after uproar in the House over the Assam NRC draft. Opposition calls for Home minister Rajnath Singh to address the House, chairman proceeds with Question Hour.

IT minister Ravi Shankar Prasad, replying to question on action taken against companies for data breach, says companies cannot use data to influence elections in India. He says govt supports freedom of social media, but tough action will be taken against elements that are related to terrorism. The minister says all social media platforms should comply with Indian laws and no fake news can be circulated in India.

External affairs minister Sushma Swaraj says the Wuhan summit was to increase mutual trust and cooperation and no specific topic was discussed. “Doklam issue has been resolved through diplomatic maturity,” she adds.

Rajya Sabha adjourned till 12 pm as uproar breaks out after RS chairman Venkaiah Naidu asks Amit Shah to conclude his statement from yesterday. Shah says Congress can raise more Point of Orders after he finishes speaking before House is adjourned.

I was very upset yesterday when some members ran menacingly towards the well of the house, I hope it will not be repeated. I don't want to name anybody, house should function smoothly: Rajya Sabha Chairman Venkaiah Naidu #NRCAssam pic.twitter.com/DCV8bBgSmq

Without naming anyone, Congress member Anand Sharma raises a point of order and insists on removal of certain comments made by Amit Shah yesterday in the Upper House.

Sharma says Shah, during his speech on the NRC debate, had termed all prime ministers in office after late Rajiv Gandhi as “buzdil’ (cowards).