Trials in fast-track courts last longer than regular ones: Data

india news
The data shows that of the more than 28,000 trials completed in India’s fast-track courts in 2018, only 22% took less than a year to complete. This is the lowest among all kinds of courts for which the data is given.
Share Via
Copy Link
Hindustan Times, New Delhi | ByVijdan Mohammad Kawoosa

Trials in fast-track courts – set up in several states to allow quick trials in cases of serious crimes such as rape – take longer than those in regular courts, according to data in the Crime in India report released by the National Crime Records Bureau (NCRB) this week.

The report gives the duration-wise break-up of criminal and civil cases disposed of by various courts. The data shows that of the more than 28,000 trials completed in India’s fast-track courts in 2018, only 22% took less than a year to complete. This is the lowest among all kinds of courts for which the data is given. These include states that had only a few cases to deal with in fast-track courts, such as Goa and Mizoram, and states such as Uttar Pradesh, where more than 9,000 cases were completed in 2018, the highest among all states. Uttar Pradesh is also among the states where a majority of trials in fast-track courts took more than three years to complete. 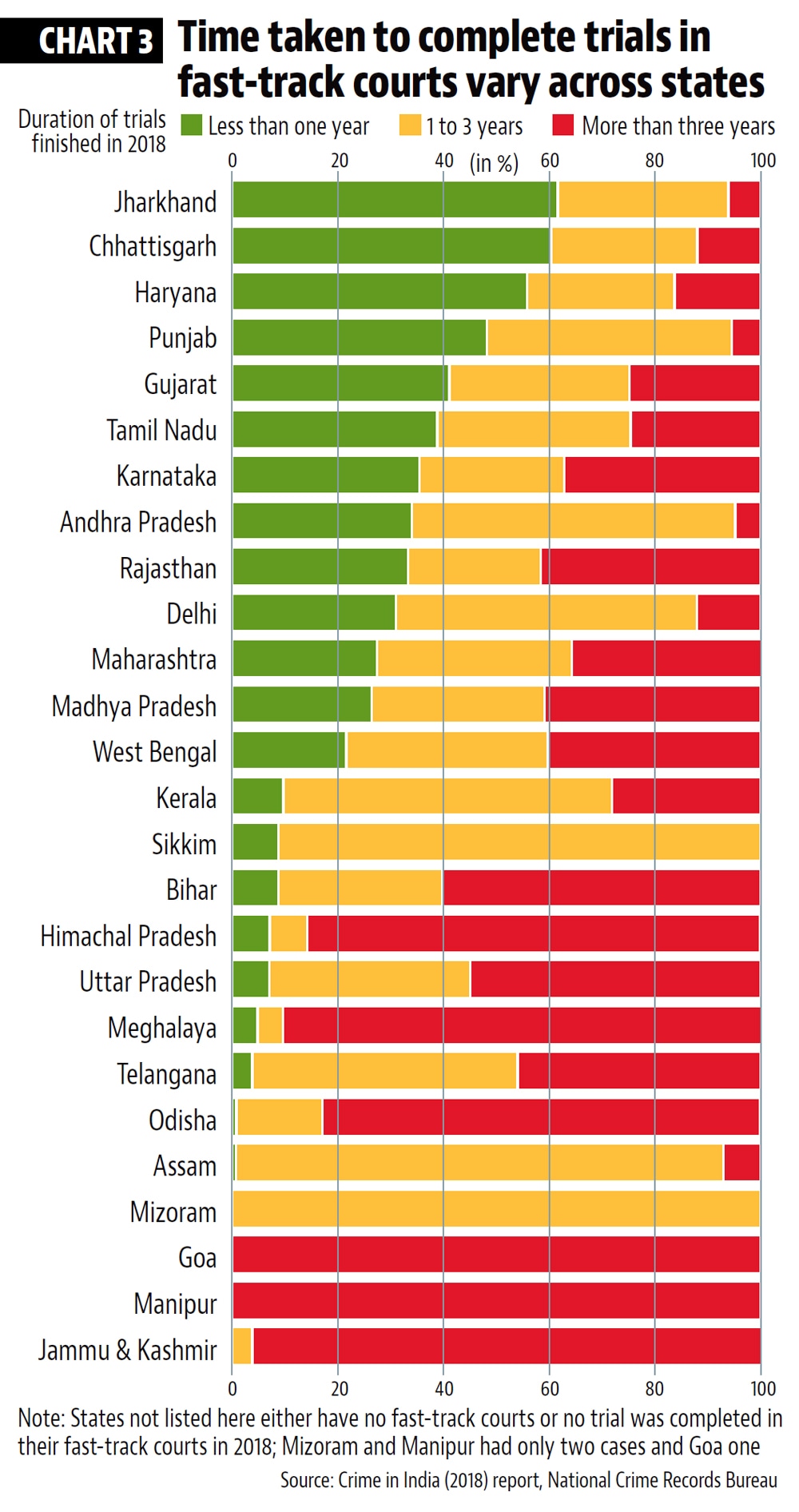 Alok Prasanna of the Vidhi Centre for Legal Policy said a study they conducted three years ago also suggested that fast-track courts were as bad, if not worse, than regular courts. “There’s no point in calling them fast-track courts as the judges are the same and the procedure is almost the same,” he said.

“You have just tried to put pressure on the people concerned to move cases quicker.” He added: “It’s not a system designed to deliver quick verdicts. It’s a fast-track court only for the name. In so many cases, the witnesses don’t come on time, then lawyers don’t turn up; judges don’t have power to discipline them, and bar councils don’t take any action against them.”

He suggested judicial reforms to ensure quicker delivery of justice. “Ensure lawyers have accountability, ensure prosecutors act fairly, ensure judges are given everything to make sure trial moves quickly, make sure police responds efficiently to all of this. Ultimately, every court will become a fast track court.”

“I am assuming that given the [serious] nature of these cases, it’s unlikely that there’s any other reason as to why the delay would have been caused.”

Arunav Kaul, who works on judicial reform issues at civil society group Daksh, said fast-track courts in some of the states were short of permanent staff. “Given all the challenges that fast-track courts face, it seems to be not surprising that actually they are slower than regular courts,” he said.

“They are not special anymore. They are supposed to do special kind of work but that’s not there anymore,” he added.