Unfortunately, there is no high frequency income or consumption data for the Indian economy. What we do have is monthly data for rural wages, which is available until June 2019.
Share Via
Copy Link
Hindustan Times, New Delhi | ByRoshan Kishore

On Wednesday, media reports said that India’s leading biscuit-maker Parle Products Private Limited could cut up to 10,000 jobs as “slowing economic growth and falling demand in the rural heartland could cause production cuts”. The company’s flagship brand Parle-G is available in packs worth ₹5, thus making is affordable to the poorest of consumers. To put this number in context, the daily average rural wage in India in June 2019 (latest available figure) was ₹328.

To be sure, other high frequency indicators (simply, data available on a much higher frequency than, say, GDP or other macroeconomic parameters) such as passenger car sales have been pointing towards a slowdown in demand in the Indian economy for quite some time. Domestic sales of passenger cars have actually declined for 12 consecutive months beginning July 2018. India’s GDP growth has gone down for four consecutive quarters beginning June 2018.

However, there is an important difference between what Parle’s announcement of job cuts and decline in car sales or slowing GDP growth suggest. The last two do not necessarily suggest a squeeze on the poorest segments of society as the burden of a slowdown in economic activity can also impact the relatively well-off disproportionately.

The first – poor people not being able to buy biscuits worth less than 2% of their daily wages – suggests that the economic slowdown is having a particularly severe impact on the poorest population in the economy. Is this indeed the case? Unfortunately, there is no high frequency income or consumption data for the Indian economy. What we do have is monthly data for rural wages, which is available until June 2019.

After having risen for almost all of 2018 (part of this was because of the base effect, a disproportionately high or low number in the corresponding period), year-on-year growth in rural wages (after adjusting for inflation) has stagnated at around 2% in the last few months.

This figure looks good when compared to the tumultuous period under the first Narendra Modi government – real rural wage growth declined for 33 months between May 2014 and May 2019 – but is actually quite low. To be sure, there is nothing unprecedented about low rural wage growth in the recent past. What is really peculiar about the last few months is the divergence in rural and urban food inflation. 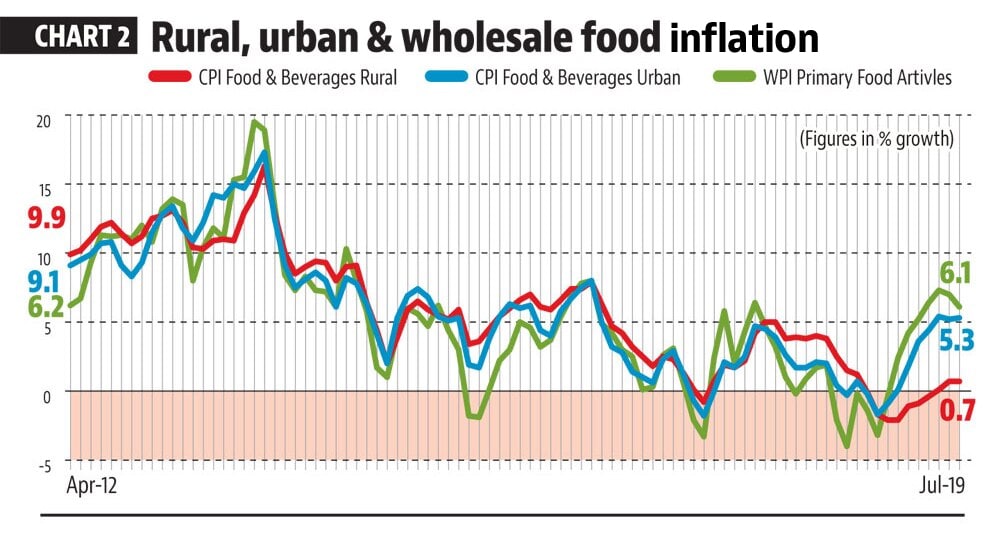 The divergence in rural and urban food inflation can be better understood by looking at sub-categories within the CPI food basket. Out of the three important sub-categories: food grains (cereals and pulses), horticultural items (fruits and vegetables) and milk and products and meat products (meat, fish and eggs), the first two show a big divergence in rural and urban inflation in the recent period.

Biscuits and chocolates are part of cereals and products in the inflation basket. There seems to have been no supply shock at the all-India level which could explain such divergence in rural and urban food inflation. It would be another thing if there were to be a strike or blockade preventing movement of farm and dairy produce from villages to cities, which could have created a glut in rural parts and a scarcity in urban areas.

If supply can’t explain this, maybe the answer is in demand?

However, one set of statistics gives an idea about what has been happening in urban and rural food markets.

One basis point is one hundredth of a percentage point. In rural areas, this number went down by 358 basis points (or 3.58 percentage points) during the same period.

For cereals and products, of which biscuits are a part, urban inflation increased by 217 basis points during this period, while rural inflation went down by 328 basis points.

This suggests that shopkeepers of Parle-G might indeed have been having a difficult time finding buyers even though they were giving discounts.This is clearly not good news for the Indian economy.