Historically, in terms of voter turnouts, women have lagged behind men by a wide margin.

Even as polling in the 2019 general elections enters its last phase on May 19, voting trends in the first four phases suggest Indian women have caught up with men in terms of turnout.

Historically, in terms of voter turnouts, women have lagged behind men by a wide margin. For instance, in the last 12 general elections (excluding the current, ongoing polls), voter turnout among men was on average about eight percentage points higher than among women. The gap, which has narrowed over time, was the lowest in 2014 general elections when 65.5% women turned out to vote, marginally less than 67.3% men. 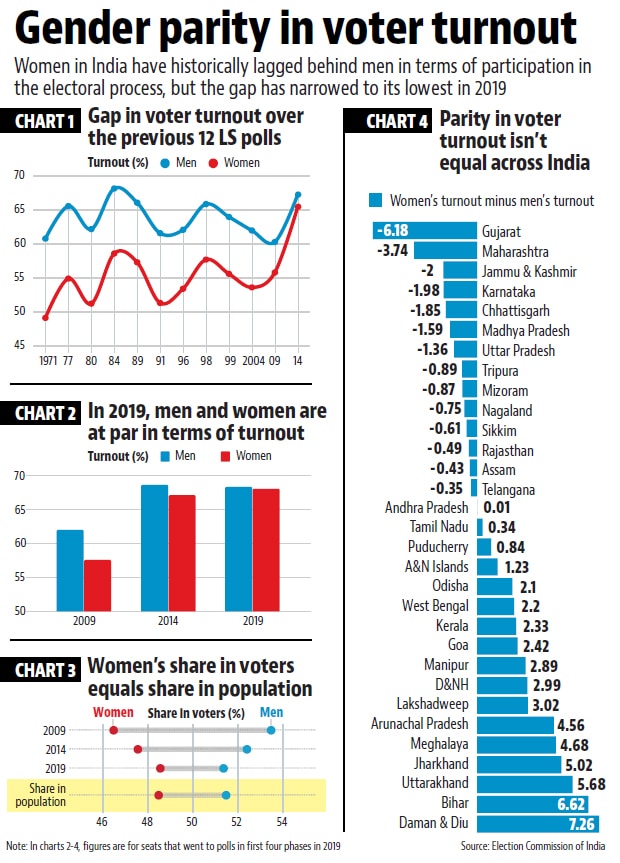 The increasing parity between men and women in terms of voter turnout has given the women nearly equal say in the electoral process, which is to say that the share of women among total voters is now nearly equal to their share in total population.

However, even as men and women have almost equally turned out to vote this year, this parity in voter participation is not equal across the country. For instance, this year, the voter turnout gap between men and women has so far been the highest in Gujarat, where the turnout among women was about six percentage points less than the men. Similarly, women lag behind men in Maharashtra by nearly four percentage points. On the contrary, in some other states such as Bihar and Uttarakhand, women surpass men in voter participation by about six and seven percentage points respectively.

See chart 4: State-wise voter turnout among men and women in 2019

To be sure, state-level historic trends show that in most states the parity between men and women in terms of voter turnout has been increasing. Among the states that went to the polls in the first four phases, this gap has narrowed in a majority of states between 2009 and 2019. Some states have shown a strong improvement. For instance, the gap in the voter turnout in Uttar Pradesh has reduced from about 10 percentage points in 2009 to nearly one percentage point in 2019. Even in states such as Gujarat, where the gap in voter turnout was the highest by the end of the fourth phase this year, the gap has been reducing over the last decade.

Overall, these trends show that women are increasingly participating in the electoral process. This is also true in terms of contesting the elections. A recent report by election watchdog Association for Democratic Reforms shows that 9% of candidates contesting this year’s elections are women.

Gilles Verniers, co-director at the Ashoka University’s Trivedi Centre for Political Data, sees three factors behind the increased voter turnout among women. First, greater access to information through widely accessible mediums such as mobile phones has helped reduce the gaps that existed between various segments of the electorate, including men and women.

Second, he said, political parties have dedicated greater portions of their manifestos to women, which might have encouraged them to cast their vote. And third, the Election Commission has made greater efforts to register women voters over the past decade. “Recent registration might have had a motivation effect on these new women voters,” he said.

Neelanjan Sircar, assistance professor at Ashoka University and senior visiting fellow at public policy think tank Centre for Policy Research, said one of the factors behind the irregular gap in voter turnout among states could be interstate migration. “You might be on electoral rolls in Bihar but you might be working in Delhi,” he said. A lot of men away from their place of residence do not go back home to vote, Sircar said, so states with heavy out-migration are more likely to see a higher turnout by women as compared to men.